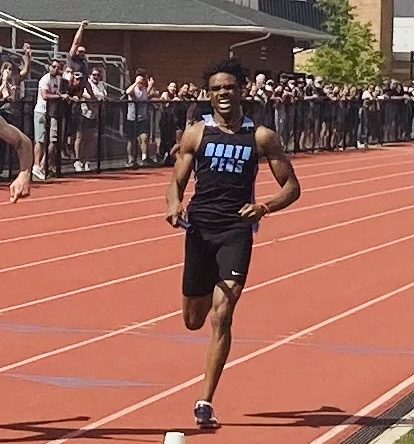 BUCKINGHAM >> Nomads of the Suburban One League Colonial Division, the North Penn boys track and field team spent this season without a home track, but have themselves a division title.

“There have definitely been some challenges this season,” said a smiling Karl Schafsteller, a captain for the Knights. “Not just with COVID, like every other team is experiencing, but also not having a track.

North Penn made a lot of things work Friday and Saturday at Central Bucks East High, combining their many efforts in pursuit and capture of the SOL Colonial title.

“About halfway through the meet, we were looking at points and we were like, ‘yeah, we got this.’ Just an excellent day,” Schafsteller said. “We’ve been working hard for this all season. It’s been building up. And we have that team culture where we can count on each other to run hard, run fast, even when we’re feeling tired.”

Central Bucks West was just as dominant on the girls side, racing away to the team title on a sunny afternoon at East.

“Across the board, every event we had some P.R.’s. We had some guys battling. They competed in every event. I’m really proud of them,” said Knights coach Jay Jones. “Last year, we thought we would have a strong team. But we have a lot of young talent out. And it was young talent that was willing to listen and work hard. And buy into the program.

“We saw it early and they just kept building and competing. We had a big win against Pennridge in the first dual meet and just kept getting better and better. We’ve got big ole smiles on our faces now.”

North Penn, which will have a new stadium and track next spring, piled up several seconds and thirds to go with their firsts. Karl Schafsteller was a key contributor for North Penn, including a second-place finish in the 1,600 at the SOL Colonial Division Championships on Saturday, May 15, 2021. (Kev Hunter/MediaNews Group)

“I know we have a strong team going into districts, and I know we’re gonna give that meet the works,” Schafsteller said. “And then after that, we’re already eyeing up states. We know we’re gonna have two, maybe three relays in there.

“So it’s definitely gonna be an exciting end to the season. We have a lot of good guys that, on another team, would be the best on that team. But now we’re competing with each other and making each other better as we go through the season.”

The CB West girls won gold medals with the baton or without it, as the Bucks swept the relays and placed first in several other events as well. Said Emmi Simon, a four-time winner over the weekend: “We have a lot of awesome girls on our team.”

“We were excited to be able to do it. I think a lot of it was team-oriented,” Simon said of the success at leagues. “We were really focusing on whoever was already qualified for districts. It’ll be exciting to get after it next week. This week, we wanted everybody to be able to get their opportunity.

“I think we’re really starting to feel that our 4×8 is getting stronger and stronger, every time we race it.” On the boys side, Carter Arnaiz of Pennridge won the high jump with a 6-4 and Ayden Stankus of Souderton won the pole vault with a 13-6.