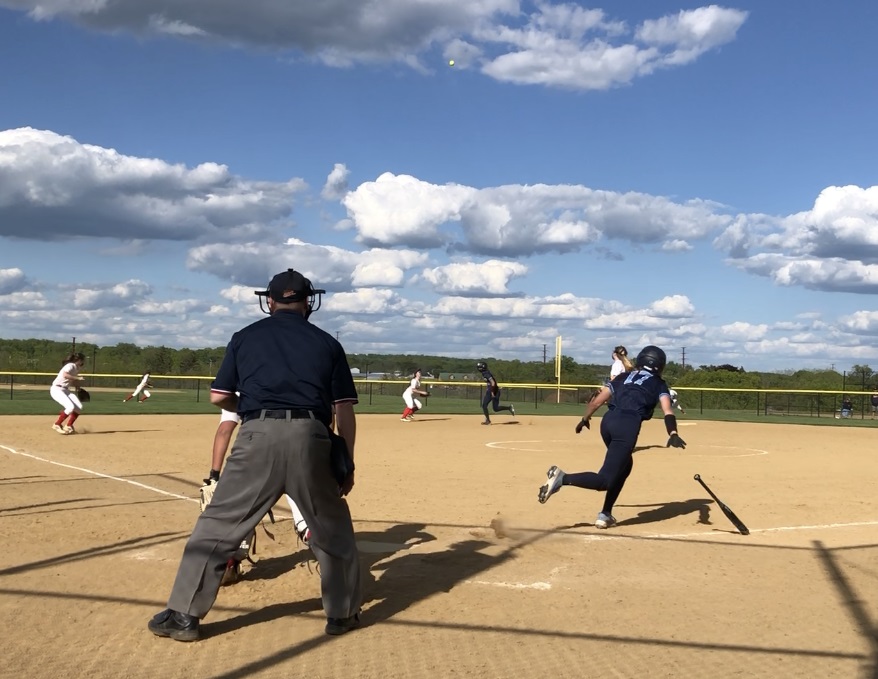 North Penn's Julia Shearer (17) sends the go-ahead double into play in the top of the ninth inning against Souderton on Wednesday, May 12, 2021. (Andrew Robinson/MediaNews Group)

FRANCONIA >> The actual postseason is approaching quickly, but North Penn isn’t going to complain about getting an early start.

Wednesday’s visit to Souderton needed a few extra innings to determine a winner thanks to a lot of good softball from both sides of the diamond. As the end of the regular season rounds for home, every opportunity to face a pressure situation is a golden one for any team hoping to advance through the bracket.

Good defense and a few timely hits were enough to help the Knights outlast Souderton 4-3 in a nine-inning thriller that secured at least a share of the SOL Colonial title for North Penn.

“The pitcher on the other team was throwing really well, so finding a way on base, running well and making good decisions was key,” North Penn outfielder Julia Shearer said. “Every play mattered.”

Shearer played an important role for the Knights (16-1, 8-0 SOL Colonial) with her two-out double in the top of the ninth scoring the go-ahead run before scoring the eventual game-winner on Sarah Sabocsik’s RBI single one batter later. The speedy sophomore led off the game with a single and eventually scored during a two-run first but the Knights would have to make a lot of plays before they would score again. Souderton (12-6, 4-4 SOL Colonial) played an outstanding game of its own but once again fell on a hard-luck outcome in a close game. Wednesday was the team’s third one-run loss this season, the others coming against Hatboro-Horsham and Central Bucks East but outfielder Riley York felt her team’s effort was a positive sign.

“It’s showed us we can hang with any of these teams,” York said. “If we believe in ourselves, we can do it. We knew we could keep up with them, but only if our bats got going and they did so it was really good to see that.”

North Penn pitcher Mady Volpe didn’t have her usual pinpoint command, with the senior walking five batters but she still recorded 14 strikeouts and had plenty of back up from her defense, which did not make an error. Volpe also helped herself out early, with her sac fly scoring Shearer in the first inning for the game’s first run before an RBI single by Bri Wilmot plated Annabelle Smink for a 2-0 lead.

That lead held until the bottom of the third when the top of Souderton’s order got a second crack at Volpe. Sierra Ripka beat out an infield single to start the inning and with two out, stood on second when York stepped in. The junior left fielder gave her team a spark of energy when she belted a pitch straight to center for a game-tying two-run home run. After being shutout 8-0 in the first meeting against North Penn, York said it was important for her team to see it could score runs against a top pitcher.

“We had to be more aggressive than we were the last game, we looked at too many strikes,” York said. “It was awesome, to put up runs against them is amazing and to see we could hang with them was awesome.”

Souderton junior Abby Burns rebounded from the first inning runs to shutdown North Penn until the top of the ninth with the right-hander battling out of a couple jams and also getting some defensive help. North Penn had a chance to take the lead in the top of the sixth when Carley DiGiuseppe glanced a ball down the third base line and into foul territory, sending a runner home from second but Souderton’s defense was able to get the ball in and catcher Brooke Scotti got the tag down at home to save the run. Volpe and her defense also had some critical stands prior to the decisive ninth inning. A double by Ripka and walk by Megan Kummery led to runners on second and third with no outs in the top of the fifth, but Volpe came back with two strikeouts and a pop up to second to end that threat.

The team’s big defensive play came in the home half of the eighth after York smoked a leadoff double to put the winning run in scoring position. Ryan Zimmerman, who had doubled earlier, hit a sharp liner that Knights shortstop Sophia Collins was able to snare then alertly throw to senior Rachel Lowry covering second to double off York before Volpe ended the frame with a strikeout.

“We just had to make the plays that were in front of us, that way no one was able to move up the bases,” Collins said. “It felt nice, Mady was struggling a little bit so to be able to back her up and get some runners off the bases was good.”

Collins also had a good day at the plate, going 3-for-4 including the rally-starting one out single in the top of the ninth inning. Despite batting in the No. 8 spot, the junior shortstop has been a productive hitter all season and helped set up the go-ahead run by getting to second on a sac bunt by Lowry that allowed her to score standing up on Shearer’s double.

“I was seeing the ball well today and kept looking for my pitch, something I could drive,” Collins said. “We needed someone to get on base.”

Shearer, who struck out twice and grounded to second base after her first out single, was just eager to reverse her fortune and come through for her team.

“I hadn’t been seeing it all game but the pitch was right there and I had to do something with it,” Shearer said. “I had to fill my role. It’s just amazing to feel that we’d gotten the go-ahead run and it was because of me doing my part.”

Souderton had fallen behind and rallied once, so the hosts went to the bottom of the ninth ready to do it again. Sierra Miller led off, falling behind 1-2 in the count before ripping a solo shot over the left field fence that cut the lead in half and fired up the Souderton bench.

Scotti followed with a single and moved to second on a sac bunt, putting the tying run in scoring position. Volpe came back with a strikeout, then got a fly ball to left field that ended the game. Despite coming up a run short, it was another gritty effort from a Souderton team that’s looking forward to the postseason. “We just need to keep believing in ourselves,” York said. “After these last few games, we have a lot more confidence in ourselves and we’ve shown a lot of growth. There’s a lot more communication and a lot more teamwork on the field and we’re constantly hyping each other up.”

With a two-game lead over CB East in the Colonial standings, the Knights can secure an outright conference title with a win against Central Bucks South on Friday or at home against East next Tuesday. North Penn is also in good position to secure a top-four seed for the District 1 6A playoffs, but there’s no such thing as too much playoff prep.

“They’ve been playing well when it comes to that, they know the pressure’s going to come on the closer we get to the playoffs and the Hatboro-Horsham game and this one, they did well handling the pressure,” Knights coach Rick Torresani said. “I keep telling them just play the game, you’ve been doing it your whole life.”