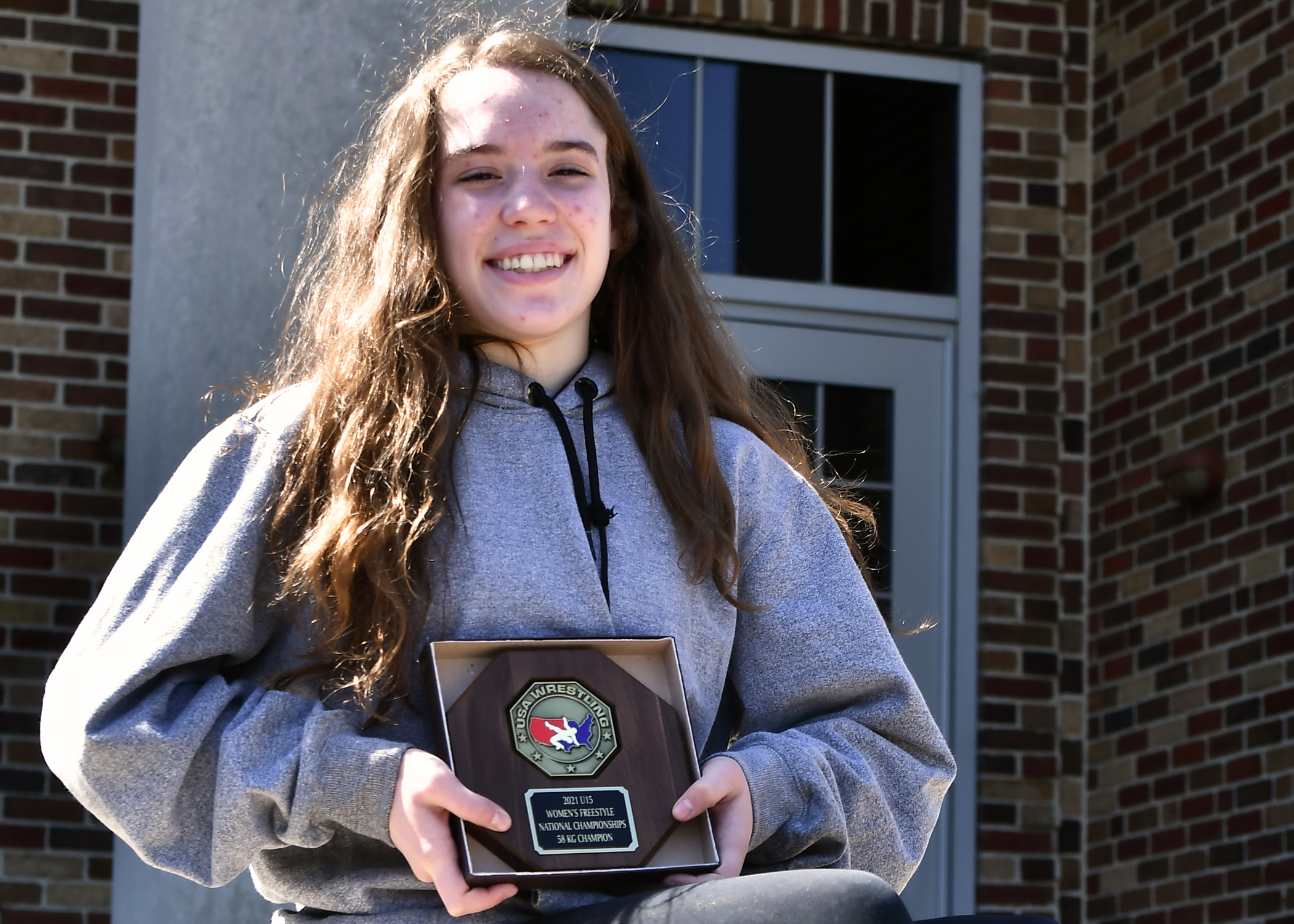 IRVING, TX—Call her a quick study. Despite the fact this was just her third year in the sport, Haylie Jaffe has already won a national championship in freestyle wrestling. This past weekend, Jaffe competed in the USA Wrestling Women’s National Championships at the Irving Convention Center in Irving, TX, where she took home the crown at 58 kilos in the U15 division. The title earns her a spot on the U15 National Team, and she will represent Team USA at the U15 Pan American Games in Mexico City this coming October.

“I really just came down for the experience,” said Jaffe. “I was just hoping I might be able to place, so it is an amazing feeling to have gotten first place.”

Jaffe “double-bracketed” in Texas, meaning she competed in two different age groups over the course of the weekend. First up was the Cadet Division (17-Under), and wrestling up an age group was an eye opener. Despite being one of the youngest in the bracket, Jaffe battled her way to within one win of All-American status.

The Kennett freshman opened her tourney with a 3-1 win over Kailey Rees from Florida, and then followed with a tech fall over Michigan’s Caylynn Chandler to advance to the quarterfinals, where she dropped a decision to top-seeded Jennifer Soto of California.

“I was impressed with the caliber of wrestling at PA Girl’s States,” said Jaffe’s Kennett club coach at Kraken, John Boyer. “What I saw this weekend in Texas was ten times better. These girls can wrestle. I couldn’t be more proud of the way Haylie competed and adjusted all weekend, and couldn’t be happier for her to win a national title.”

Dropped to the consolation bracket, Jaffe needed a win to earn a spot in the top eight and All-American status, but standing in the way was Idaho’s Alyssa Randles. Jaffe was tied 1-1 late in the bout, and would have won by criteria—there is no overtime in freestyle wrestling—but kept pushing and got in deep on a shot. Unable to finish, Jeffe ultimately gave up the takedown, and Randles tacked on two with a gut wrench as time expired, stealing the 5-1 decision. “I probably should have scored with a push-out there, but I was kind of stuck in a folkstyle mentality that I could just work my way through it,” said Jaffe. “I just had to get more focused on my techniques and wrestle smarter.”

Jaffe was disappointed, but rather than dwell in her misery, she decided to put it in the rearview mirror and re-focus for the U15 tournament Sunday.

“Through the cadet tournament, I was shooting a lot, but when I didn’t finish, I was getting rolled through for points,” said Jaffe. “I talked to all my coaches, John Boyer, Jarrod Garnett and Jeff Moretti, and we decided I should work more underhooks and snap downs and get on my offense from there.” Jaffe is rarely off the mat, putting in time at Kraken, the LAW club in Lancaster, and Misfits near Philadelphia, and soaks up coaching like a sponge.

“I love hearing different views of the sport and learning different ways to do things,” said Jaffe. “Every coach has something I can learn and help me improve. And my dad, Josh Jaffe, introduced me to CrossFit, which is incredible for strength and conditioning. I wouldn’t be anywhere without my coaches and my dad.”

Jaffe went straight to work in the U15 tournament, reeling off a pair of tech falls, 10-0 over California’s Laila Reyes and 11-0 over Brenya Crahan of Missouri to once again reach the quarterfinals. This time Jaffe came out on top, 4-3 over Gina DiBenedetto of California, to, at the very least, lock up All-American status.

Up next in semis, Jaffe squared off against New York’s Ragan Retell. With no scoring in the first minute, Retell was deemed “passive”, and was put on the activity clock, meaning she had 30-seconds to score, or Jaffe would be awarded a point. The first period ended with Jaffe up 1-0.

Early in the second, Jaffe added a takedown on the edge for a 3-0 advantage. One more takedown in the final ten seconds, and Jaffe was a 5-0 winner, earning a spot in the best-of-three championship finals.

“We thought she’d do OK in cadets, and she wrestled tough,” said Boyer. “Saturday night, she and Jarrod sat down and reviewed video and worked out a plan for U15 Sunday. After starting out on fire, she hit a couple tough matches against California and New York, but she stayed strong and persevered.”

Jaffe dropped the first of the best of three, 5-3, against Georgia’s Genevieve An, but came right back to get out to a 5-0 lead in match two, and held on for a 5-3 win. The final bout was all Jaffe, with three takedowns in the first minute of action, and another pair in the second period to win 10-2.

“It is an amazing feeling, but I wouldn’t have been here without a lot of help,” said Jaffe. “Blake Boyer has been an amazing training partner, and my brother Zach helped me prepare too. I have to thank Jeff Moretti, John Boyer and Jarrod Garnett for coaching me all weekend and all they do. And my dad, especially. He is the one that got me into this sport, and pushed me from day one to be the best I can, running me everywhere for practice, and just being there for me.”