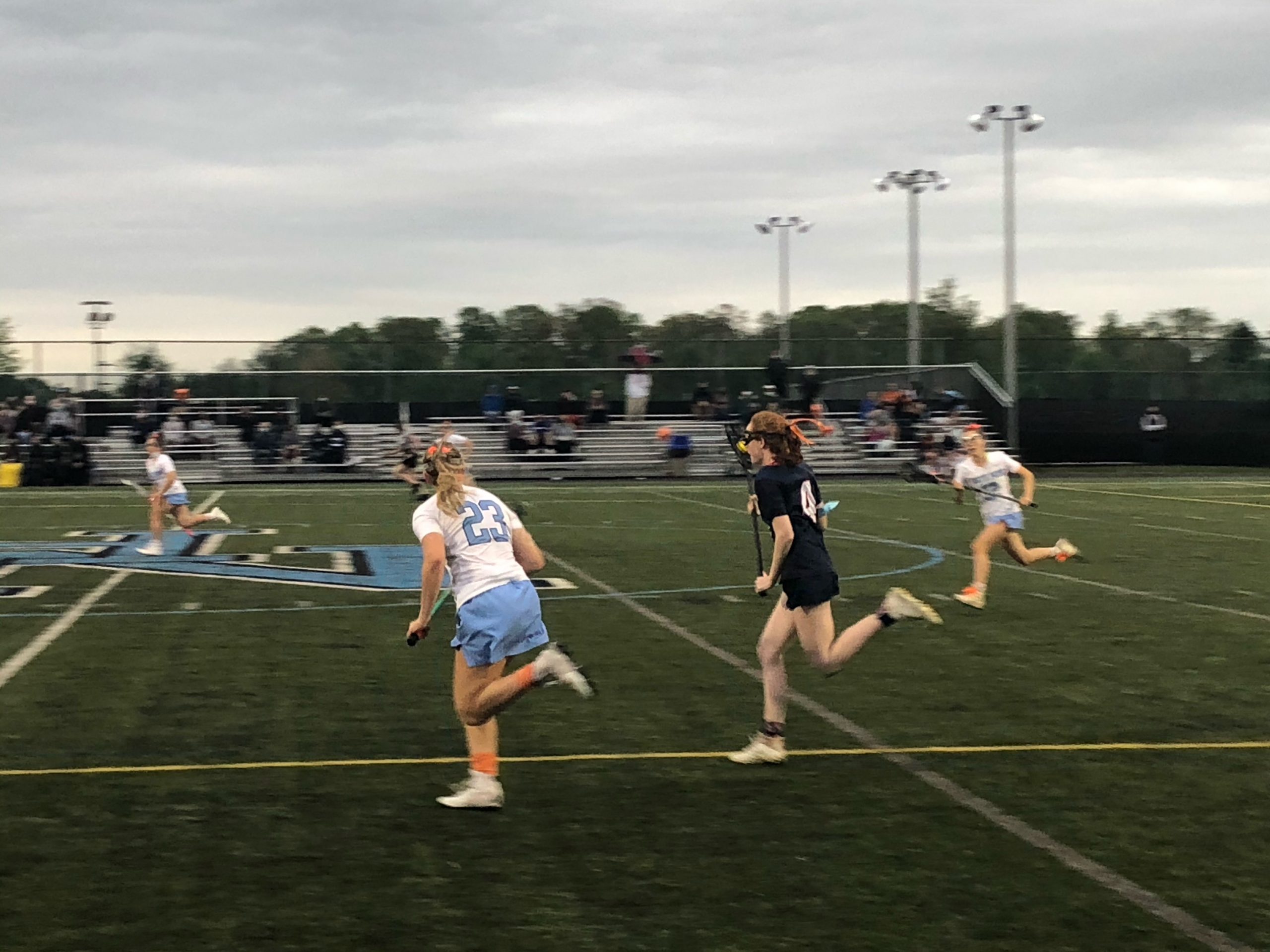 North Penn's Alli Lindsay (23) gets back to defend Central Bucks East's Courtney Mackenzie during their game on Monday, May 3, 2021. (Andrew Robinson/MediaNews Group)

TOWAMENCIN >> The theme of the night was to never stop fighting, so that’s just what North Penn did.

Through a rough start, a tie game at half and a downpour after halftime, the Knights’ girls lacrosse team kept battling on against Central Bucks East. On a night that honored Alyssa Oxenford, one of the strongest fighters in the history of the program, North Penn gave a worthy effort with their resolve.

The Knights took command with a strong second half, topping the Patriots 13-6 on Monday in their “Lax for Leukemia” game.

“It’s what the whole night was about, not giving up on the fight,” Knights coach Heather Mellow said. “It was perfect. They did exactly that, they didn’t give up, they fought through and came through in the end.”

Oxenford was a 2011 North Penn gradute, where she played soccer and lacrosse, before going on to play lacrosse at East Stroudsburg. As a junior in college, she was diagnosed with leukemia and fought the cancer valiantly before she passed in August of 2015.

Players from both teams wore orange bows and most of the Knights had orange shoelaces, the color of leukemia awareness.

North Penn (7-3, 6-1 SOL National) started the game with a flurry of chances, but the Knights hit the post three times and had three shots saved in the first five minutes with their offense playing a bit frantic and hurried. East (4-8, 2-5 SOL National) not only withstood the initial salvo, the Patriots had the perfect counter when they scored on their first shot of the evening.

By the 13:42 mark of the first half, East led 4-0 and North Penn was taking a timeout to try and pull things together.

“This is a special night for our lacrosse team, we’re playing for Alyssa and we got it into our heads we were doing this for her,” Knights senior Lily Szilagyi said. “We weren’t playing for ourselves, we were playing for her and that kept up our energy and we pulled through by the end.”

Szilagyi finally got North Penn on the board with 10:34 left in the first half when she scored off an eight-meter restart. The Knights got a huge boost from an unexpected source as they would continue to build on the momentum started by Szilagyi’s goal.

Senior defender Caroline Hoy came up with a ground ball on a defensive stop, then took off on a mission by carrying the ball up the field and into the attacking end. Just as Hoy looked to pull the ball back and let the offense set up, she drew a foul to put her in an eight-meter.

Hoy buried her take, cutting the lead in half and giving her team a major spark.

“She doesn’t score any goals, so that really pumped us up,” Mellow said. “Kiera (Holt) made some big saves that allowed our defense to finally get the stops and allow the momentum to shift.”

Szilagyi scored the next two goals, tying the game up at 4-4 before Jordan Baily put one away with 2:24 left in the half to give the Knights their first lead.

East showed some fight of its own, tying the game up just before the half when Morgan Eater made a pass through traffic that Courtney Mackenzie made a great catch and finish with to make it 5-5. Mellow said the Patriots’ record doesn’t reflect their skill and credited East for putting her team on its heels early.

An early yellow card to East in the second half allowed North Penn’s Alli Lindsay to score the go-ahead goal with 23:28 left in the game. The Knights withstood a stretch with two players sidelined due to cards without giving up the tying goal, though the Patriots did hit a post, got their players back and took a two-goal lead thanks to Danielle Preston.

“We needed to control the ball and that started with getting more draw controls,” Mellow said. “Once we did that, we started playing more of our game and more at our speed. We just had to settle, we started so frantic and same with our defense, once they started communicating and doubling, that’s when it clicked.”

Paige Heller had an impressive play for East winning a draw control and racing down to score, cutting the Knights’ lead to 7-6 but the hosts would take total control from there. Speedster Emily Varilla scored, followed by Lindsay netting a second and just before the heavy rains came, Kerry O’Donnell made a great pass to set up a Kayla Stressman goal with 10:50 left.

As the teams came out of a timeout, the on-and-off rain went all the way on in a full downpour but it wouldn’t slow down North Penn. Varilla and O’Donnell buried eight-meter attempts before Szilagyi put away her fourth tally of the night with 4:39 on the clock.

With water starting to accumulate on the turf, the officials opted to call the game there.

“It was a lot of really good teamwork,” Szilagyi said. “We settled in, looked for the open girl in the middle and went from there. It seemed like it worked every single time. It was a great night, a great win for us and we’re happy as a team.”