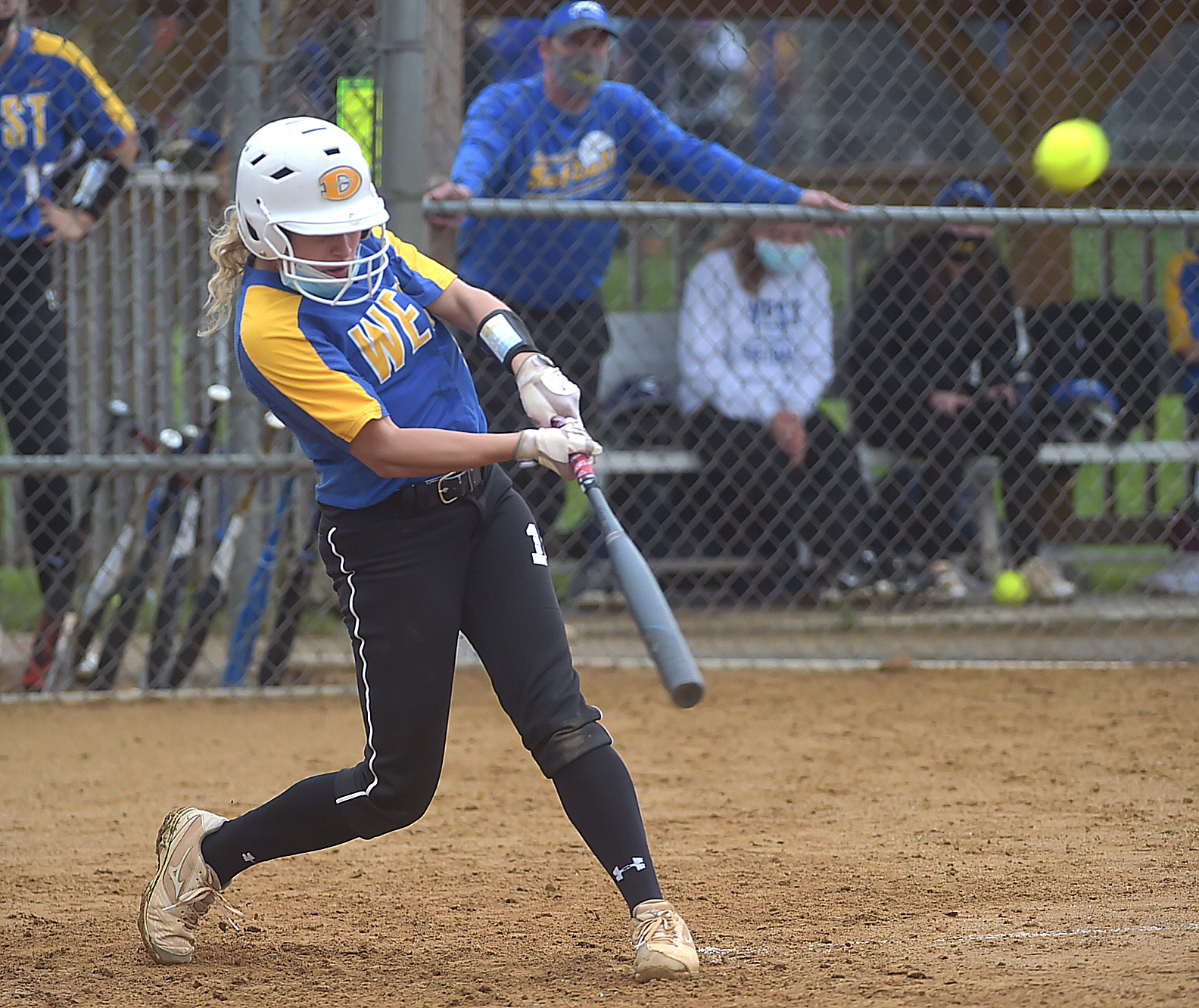 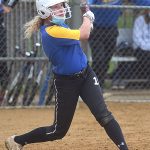 Downingtown West slugger Nicole Lioumis watches her two-run homerun clear the fence in the fourth inning against Avon Grove. The Whippets went on to a 7-0 victory. 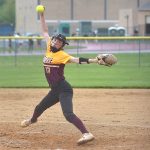 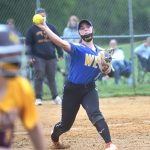 Downingtown West third base (10) Tayler Posner throws out Avon Grove’s (4) Taylor Morris in the fourth inning as the Whippets went on to a 7-0 victory. 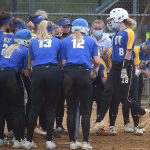 Downingtown West teammates congratulate (8) Nicole Lioumis as she scores on with a two-run homerun in the fourth inning against Avon Grove. The Whippets went on to a 7-0 victory. 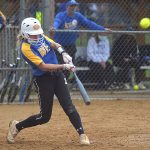 Downingtown West slugger Nicole Lioumis smacks a two-run homerun clear the fence in the fourth inning against Avon Grove. The Whippets went on to a 7-0 victory. 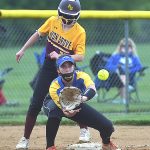 Avon Grove runner (26) Lauren O’Neill is safe at third as Downingtown West’s (10) Tayler Posner gets the throw however the Whippets went on to a 7-0 victory. 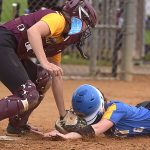 Downingtown West’s (6) Anne Eliason is out at home as Avon Grove catcher Madeline Kelly applies the tag. The Whippets went on to a 7-0 victory. 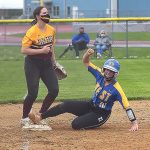 Downingtown West’s (10) Taylor Posner slides safely into third on a fielders choice, she later scored as the Whippets went on to a 7-0 victory. 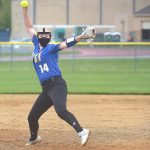 Downingtown West’s (14) Audrey Wright throws as the Whippets went on to a 7-0 victory over Avon Grove Monday.

DOWNINGTOWN >> If there was ever a time, and an opponent, to challenge Downingtown West’s 2021 softball supremacy in the Ches-Mont league, it was Monday. Visiting Avon Grove came in with a 10-game winning streak, and had a chance to move into a first-place tie in the standings with six regular season outings to go.

But with senior Audrey Wright in the circle registering a complete-game, five-hit shutout, and a bunch of clutch hitters in the lineup like junior Nicole Lioumis, the Whippets turned a tight early battle into a relatively routine 7-0 victory. It may have been the last chance for anybody to slow down West’s run to the title.

“(Avon Grove) was right behind us in the standings, so this win is huge for us,” Lioumis said.

“(West) is a great team and they are going to go far (in the postseason),” added Red Devils’ head coach Andria Pannell. “But we need to be better.”

Now 11-1 overall and in the league, West has won seven in a row and is looking to fine tune things heading into the District 1 6A playoffs. They had to dodge the raindrops to get this one in, and it was much more competitive than the first meeting – a 19-3 Whippets’ decision in early April.

“We didn’t hit like we did against (Avon Grove) the last time,” said West head coach Joe Germani.

“They are the closest team to us in the standings so this will help. We have four more games this week, so it was good to get this one in because of the (weather) conditions.”

Scoreless through three full innings, Lioumis put her team in charge with one swing of the bat. The Whippets had just opened the scoring with an unearned run in the bottom of the fourth when she blasted a two-run homer well over the right field fence.

“It is very hard to hit an opposite-field home run on this field, but Nicole crushed that ball,” Germani said.

“Our power comes from different points in our lineup. We can start (a rally) from batters one through nine, so it’s a nice luxury to have. (Lioumis) is our seven hitter, but he acts like a three hitter sometimes.”

It wound up being a turning point as West proceeded to score all of its runs in the final three stanzas.

“At first, I was thinking that maybe it was just a long fly ball, but it just kept sailing,” Lioumis recalled.

“One hit can change the momentum of a game. But we come into every game as a team, so it wasn’t just one hit. It just started the momentum.”

A run scoring double by infielder Taylor Posner and an RBI single by Morgan DeFreitas made it 5-0 in the fifth and then Posner drove in another with a second double to highlight a two-run sixth.

“Up and down, we have a strong lineup,” Lioumis said. “So it doesn’t matter who it is, somebody can change momentum.”

And all along the way Wright continued to blank the Devils (10-3, 11-3 overall). And the righty seemed to get stronger in the latter innings. She send down eight of the last nine batters she faced.

“I think Audrey pitched her best game of the season,” Germani acknowledged. “(Avon Grove) can hit, and they’ve been playing great softball heading in.

“She isn’t going to blow it by you but she pitches to contact. She hits the strike zone. Somebody might hit it out but she is not going to walk you. Plus she had a good defense behind her.”

The Red Devils never hit it out. They did, however, have a few openings in the early going, with three runners in scoring position, but were unable to capitalize. For example, Lauren O’Neill had a one-out double in the third inning, and teammate Alexa Smith opened the fourth with a double. But both wound up being stranded.

“We should have been better, but I will give credit where credit is due: (Wright) was good,” Pannell added. “She has good control but she also has an incredible defense behind her.”

Wright finished with just two strikeouts, but she did not walk a single batter.

“I didn’t feel pressure to strikeout everybody because I know all of the defenders behind me were going to make the plays,” Wright pointed out.

“My curveball was definitely working today and they were hitting it off the end of the bat quite a bit on my change-up. As long as those were working, I didn’t have to focus on strikeouts, I could focus on having (Avon Grove) hit it in play and let my defense make the plays.”

Lioumis, Posner and leadoff hitter Meghan Sinkus each registered two hits to lead the way for the Whippets. Smith and Brianna McKeown had two hits apiece for the Devils, but the rest of the lineup was 1-for-19.

“But (West) was the better team today.”

Mathematically, the Ches-Mont race is still up for grabs. But The Whippets would have to stumble significantly the rest of the way on order to give Avon Grove an opening.

“If we lost this one, it would have been a toss-up for the Ches-Mont,” Wright said. “So we feel like we sealed it today.

“We really want to go far in districts and states this year. I think this is the best team we’ve had in quite a while.”

ROUNDUP: Another day, another shutout for Interboro’s Kerwood
Mercury Softball Roundup (May 3): Pottsgrove’s Eckman strikes out 10 in two-hit shutout of Upper Merion