All-Delco Swimming: Bergstrom made history with gold at PIAA championships 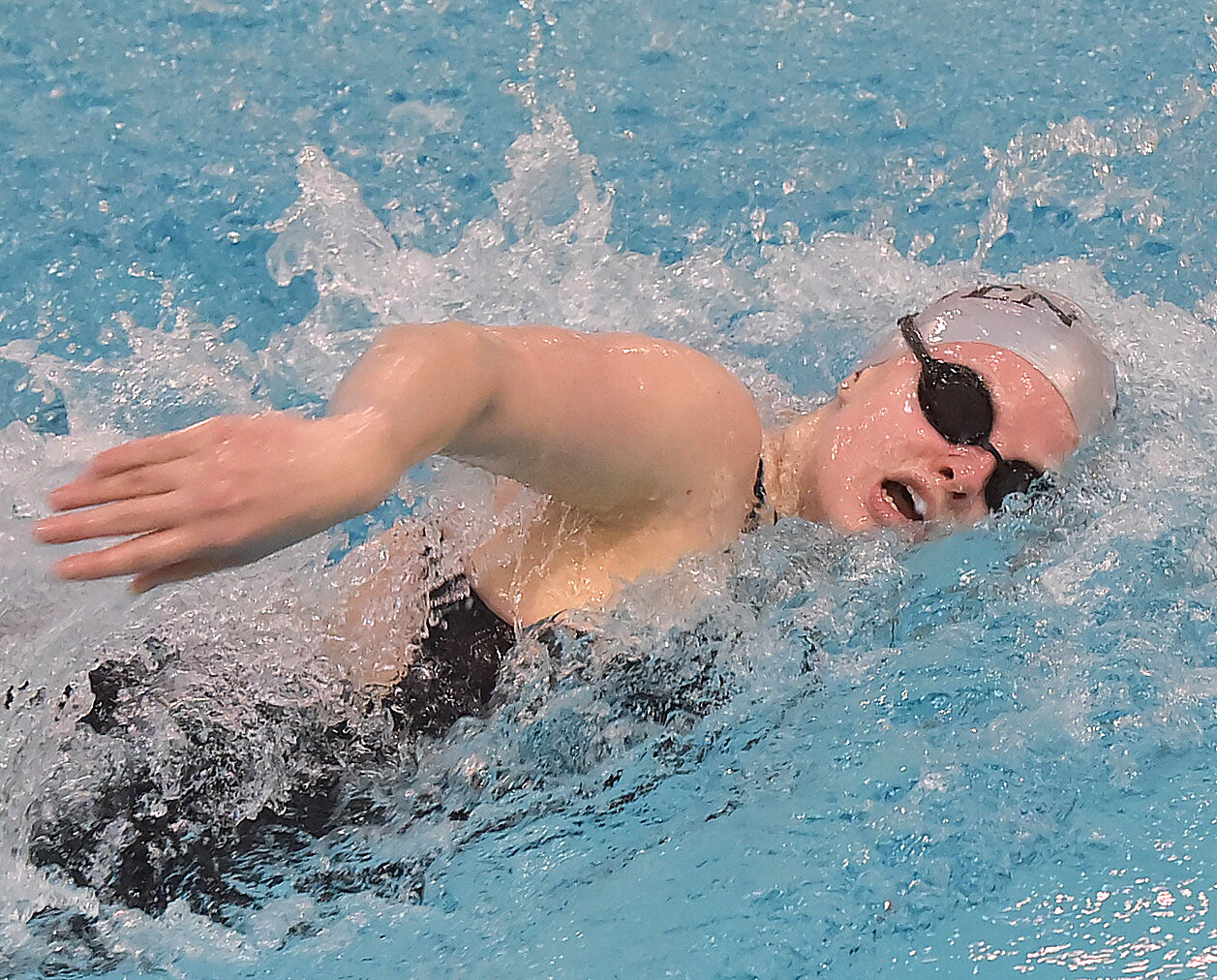 Strath Haven's Sydney Bergstrom became the first female swimmer in program history to win a PIAA championship with a victory in the 500 freestyle.(Pete Bannan/MediaNews Group)

In addition to swimmers of the year Katya Eruslanova of Haverford High and Episcopal Academy’s Jack Christian, the rest of the All-Delco team includes:

Sydney Bergstrom, Strath Haven: Bergstrom missed out on ending the Delco state title drought by about two hours, thanks to her training partner Eruslanova getting there first. But the Haven junior made the most of her moment, swimming to victory in the 500 freestyle in 4:55.91. She was more than two seconds quicker than at districts, having just one states swim to focus on. She’s the school’s first girls PIAA swimming champ and first of either gender since 2002. Bergstrom won the District 1 title in the 500, again a 1-2 with Eruslanova. She claimed seventh in the 200 free at districts. She also won the 500 at Centrals and helped the Panthers’ 400 free relay finish fifth.

Casey Cullen, Radnor: Cullen is an All-Delco for the second time thanks to her knack for big postseason performances. She always comes out firing with her two preferred events on the first day of championship meets, so the adjustment to the one-day format during COVID-19 was easy. Cullen finished fourth in the 200 free at states, going 1:50.76, just .11 slower than she was in winning the District 1 crown. She returned an hour later to earn fifth in the 100 butterfly in 55.87. Cullen helped the Radnor 400 free relay finish 10th at states, the best relay finish of the Delco contingent, boys or girls. Cullen was second to Catherine Weaverling in the 100 fly at districts, where she swam on two relays.

Catherine Weaverling, Garnet Valley: Another year, another haul of states medals for the Garnet Valley senior. The three-time All-Delco finished third at states in the 100 fly in 55.51. She won gold at the District 1 Championships in that event. Weaverling managed to place higher in the 100 back at states (sixth in 56.01) than she did at districts (seventh), and she piloted a reloading Garnet Valley squad in getting its 400 free relay to districts. Weaverling won the 100 fly at Centrals and was second to Eruslanova in the 100 back. She’ll continue her career at the United States Naval Academy.

Mia Abruzzo, Notre Dame: The COVID-19 pandemic trimmed the schedules for the Inter-Ac schools, which got neither a league championship nor the Eastern Interscholastic Championships. That’s the biggest reason why the three-time Daily Times swimmer of the year and Georgia signee didn’t make it 4-for-4. But even without resting for a postseason, Abruzzo’s in-season times remained elite. She was just a shade slower than Cullen in the 200 free (1:51.35). Her 55.90 in the 100 fly was within range of Cullen and Weaverling, and the 500 free of 4:56.24 a quarter second behind Bergstrom. She also posted the best sprint times (24.19 50 free, 51.84 100 free) from a flat start in Delco. In the Easterns virtual leaderboard, Abruzzo finished first in the distance events and in the top four of five events.

Alexandra Pastris, Marple Newtown: Regardless of classification, Pastris is a star on the boards. After medaling at Class 3A states her first two season, the three-time All-Delco won the PIAA Class 2A diving title. She scored 412.10 points, nearly 15 clear of her chasers. She’s the first state diving champ from Delco since 2004 (Ridley’s Josh Bonner) and first girls champ since 1979 (Mary Ellen Clark of Radnor). Pastris also won the District 1 crown with 446.50 points and a winning margin of 105 points. She outscored the District 1 Class 3A champ by 36 points.

Jack Deppen, Haverford School: The senior is the bridge between eras for the Fords, from 2020’s star-studded class to a younger generation bubbling up. Deppen finished in the top six of the Easterns virtual leaderboard in three events. He clocked in at 1:56.10 in his top placement, for fourth in the 200 IM. He landed sixth in the 200 free (1:42.90) and 100 back (51.93). Like Abruzzo, his senior season was heavily abridged by the pandemic, lacking a championship season. Deppen will swim at Penn State.

Rhett Cosgrove, Radnor: The junior was the only Delco boys swimmer to qualify for two individual events at the cut-down states meet. Cosgrove finished 11th in the 200 free, his best time a 1:42.36 at the District 1 Championships, and eighth in the 500 in 4:36.43. Cosgrove was third in both events at the District 1 meet, where he swam fly on Radnor’s 200 medley relay that placed fourth and anchored the eighth-place 200 free foursome. That medley relay won a Central League title, one of only three claimed by Delco schools.

Jake Kennedy, Springfield: The freshman burst onto the scene for the upstart Cougars, who went unbeaten in the Central League season and finished second to Conestoga at Centrals. Kennedy was the county’s top sprinter, qualifying for states in the 50 free, where he would finish 15th. Kennedy’s speed topped out at districts, taking third in 21.20. He also won the Central League title in the splash and dash in a 1-2 with older brother Luke and was third in the 100 back. Kennedy helped the Cougars’ 200 free relay finish sixth at districts and the 400 free relay take home 11th place.

AJ Rosenberger, Haverford School: There are bright days ahead for the Fords freshman. Rosenberger posted the second-highest score on the Easterns virtual leaderboard over six dives with 270.08 points, trialing only Malvern Prep star Nick Harris. Rosenberger is third on 11 dives with a tally of 419.15. Rosenberger finished fifth at Easterns as an eighth-grader last year.