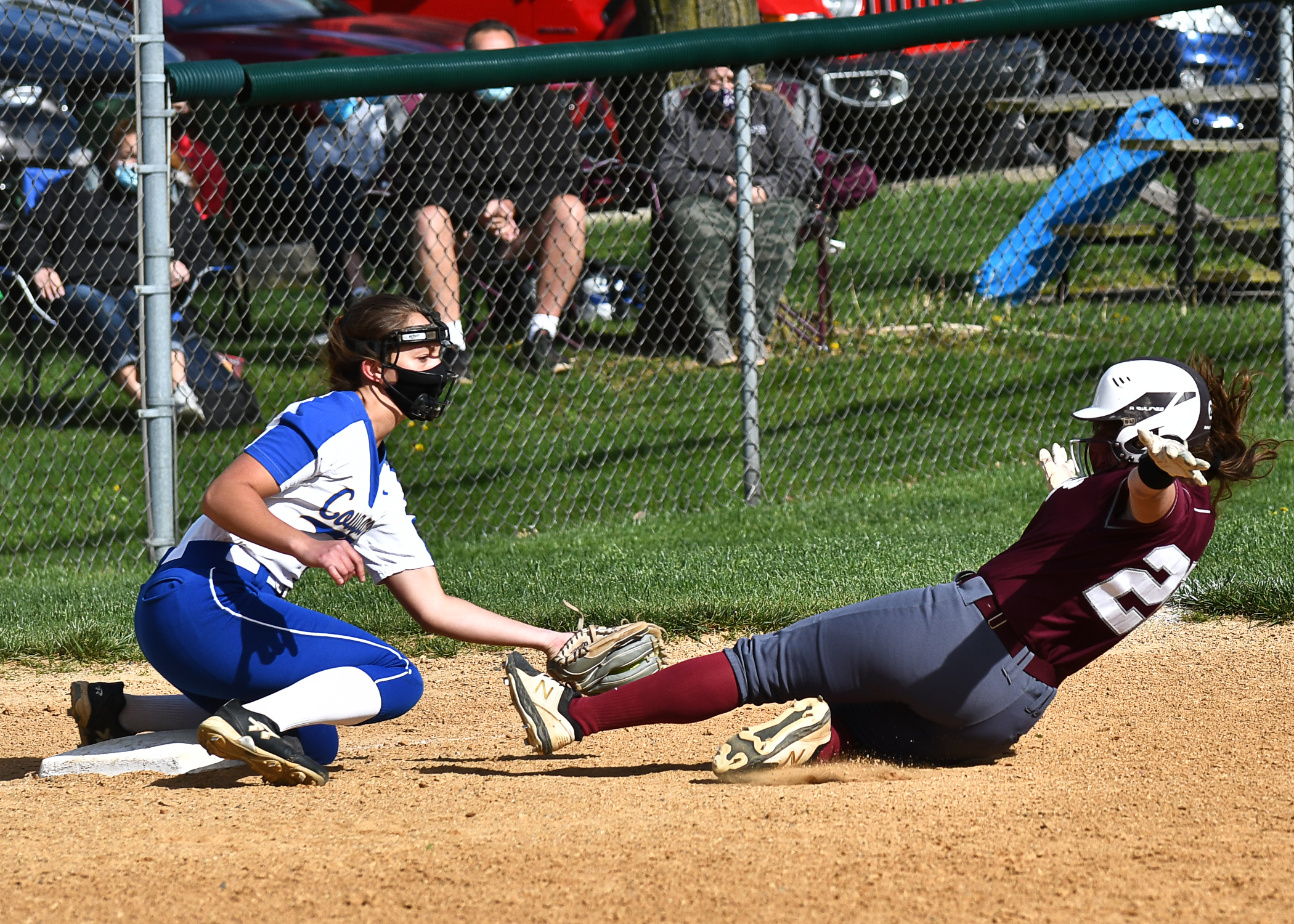 LIONVILLE—Since the Cougars knocked off Ches-Mont American leader Kennett 5-1 a couple weeks back, they’d hit a bit of a rough patch, dropping four straight. On Friday, they played host to a Conestoga team looking to boost its playoff hopes with a win. The two teams battled each other and crazy, swirling wins for much of the game before Downingtown East (7-5, 7-4 Ches-Mont), with the game tied 2-2, exploded for 10 runs in the bottom half of the sixth to come away with a crazy 12-2, six inning win over the Pioneers (7-5, 6-4 Central).

“The big turning point actually came on defense in the top of that inning, when we came up with two outfield assists, especially the one at third,” said East coach Bill Williamson. “That got us all pumped up and once the lead-off hitter got us going in the sixth, we just started hitting.”

“Double” was the word of the day, with the two teams combining for seven of the two base hits, including four from the Cougars in the fateful sixth alone. Back to back doubles in the top half of the first from Libby Winters (2 for 2, R, RBI) and Casey Kovarick (2 for 3, RBI) led to both runs for the Pioneers. “For five and a half innings, this was a really tight, well-played game from both teams,” said Conestoga Co-head coach Todd Whitlow. “Hats off to Downingtown East. They played a great game and really hit the ball.”

Downingtown East answered right back in the home half of the first. Ainsley Robinson (1 for 3, 3 R) got things going with a leadoff walk, then promptly stole second and third. Julia Thornton (2 for 4, 2 R, 2 RBI) followed, and ripped a double to the gap in left center, then came around to score when Nicki Sudall (1 for 2, 2B, R, 2 RBI) brought her in with a sacrifice fly. “We  had a serious momentum shift,” said Sudall. “We definitely never had that big of n inning before. We really needed this win. We still have second games against the teams we’ve lost to, and this brings us back to the caliber of play we are capable.”

Conestoga threatened in the top half of the sixth, when Katie Chuss led off the inning and stroked a single to center. With one out, Chuss took off for second for a stolen base, then headed for third when the ball sailed into centerfield. But the Cougars’ centerfielder, Gracie Roth, picked up the ball and fired a strike to third baseman Racheal Schumann, who got the tag down for the out. Right fielder Julia Thornton then threw out a runner at first for the third out.

East was exactly where they wanted to be in the order when they came to the plate in the bottom half of the inning—the top. After Robinson led off with a single, and Thornton was hit by a pitch, Sudall delivered the go ahead run with a double. Before the inning was over, the cougars had batted around, with doubles from Brooke Protesto, Steph Allesandro, and Ashley Ponto, along with singles from Thornton, Angelina Romano, and Schuman. Romano picked up the win in the circle going six strong. She allowed two runs on seven hits, striking out five and issuing just one base on balls, which was an intentional walk.

“We had a scouting report on her, and it was accurate” said ‘Stoga co-coach Kevin Conaway. “She throws a lot of strikes. I doubt she threw more than eight balls those first 3 or 4 innings. If we come up against her again, I think what we really need to do is just be more patient and wait for our pitches to hit.”