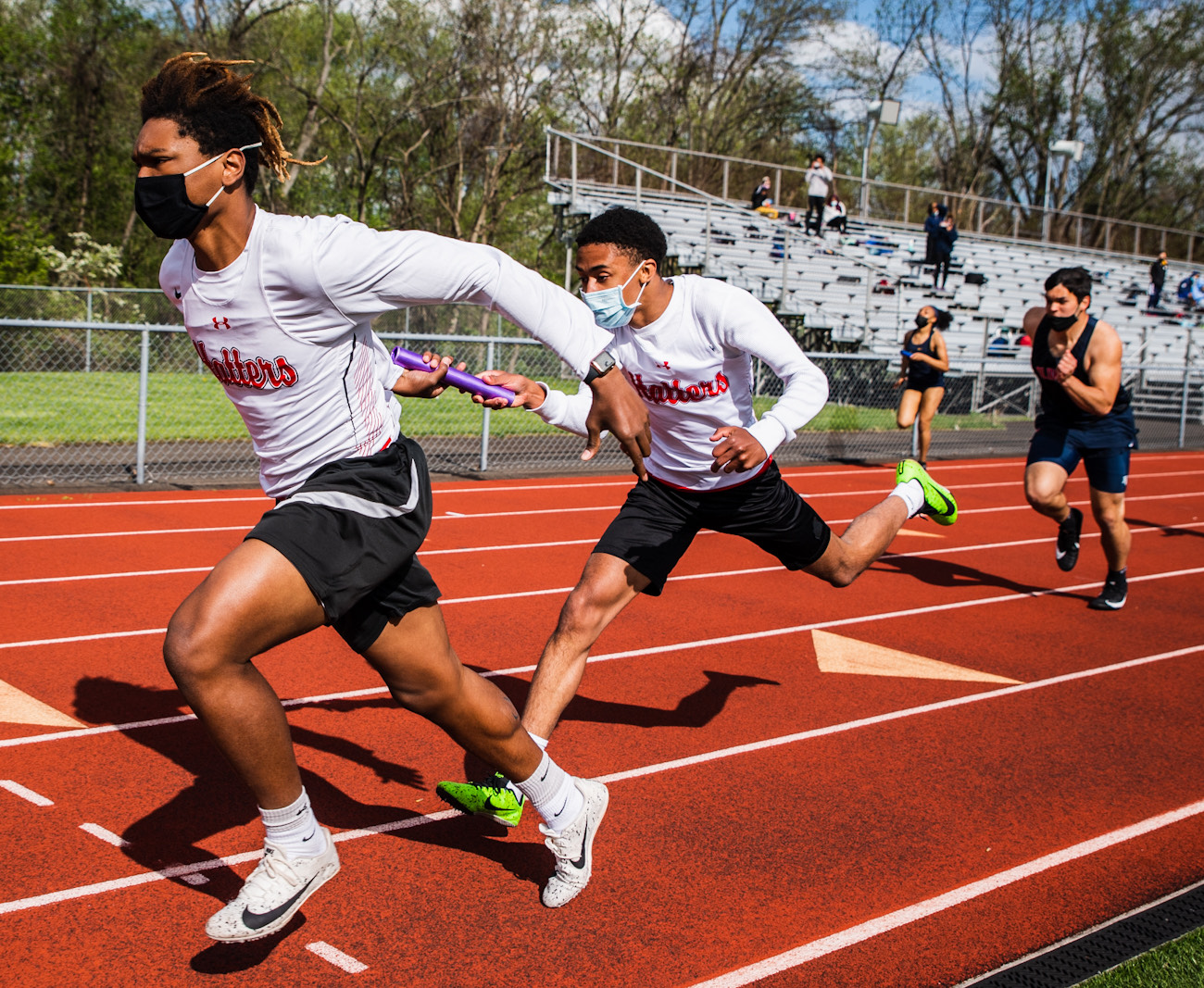 Hatboro-Horsham junior Cole Jackson hands the baton off to Markel Roberts-Jackson during the boys 4x100 meter relay at the Hatboro-Horsham Track Invitational on Friday, April 30, 2021. The Hatters placed first in the event. (James Beaver/For MediaNews Group)

HORSHAM >> Friday’s gale-force winds made every run, throw and leap an adventure and made the pole vault and high jump impossible.

But there was Hatboro-Horsham’s Kasey Savage doing what he always does, outperforming everybody in the triple jump.

“In my 20 years of coaching, he’s as focused as they get,” Hatters coach Mike Harmon said on this blustery afternoon on the home track. “The work ethic he has had is amazing. His real goal is to win a state championship.”

Savage continued his outstanding senior season, battling through the gusts and leaping to a first-place mark of 46 feet, 6 inches.

It was part of a windy but memorable day for locals at the Hatter Invite.

“This is the most amount of wind I’ve ever had. I just made the most of it,” Savage said.

Savage’s win on Friday came at a special time. The senior made his college decision for next year, committing to The University of Connecticut.

Said Savage of his choice: “They have a good finance program and their jumping program is one of the best in the nation.” The Hatboro-Horsham standout owns the top triple jump in the state this spring, and may see a familiar face next year, as teammate Devon Comber (first in 3,200) is headed to Villanova. There’s a great chance they’ll both be competing at the Big East Championships.

“We’re excited about the talent we have,” Harmon said. “They’re a team first and they all wanna help each other get better and grow. That’s what’s really important to us.”

It was an outstanding day for Hatboro-Horsham.

Also, Ahkeel Malcolm won the long jump with a leap of 18-5.5 for Cheltenham. Wins in the Wind >> Plymouth Whitemarsh’ Jordan O’Brien hurdled her way to victory in the 300’s, crossing in 51.35 seconds.

“I just had to work as hard as I could because of the wind but I got some good times today so I was proud,” the senior said.

O’Brien may have notched a third victory in the high jump had it not been for the wind cancelling the event.

Said the senior: “I’ve run in hot temperatures, cold temperatures, but never this windy. You really just had to stick your head down and barrel through it. It was very, very hard to get through it but we pushed through.”

O’Brien is headed to St. Joe’s next year, and has a pretty good head start.

“I’m feeling pretty good because I’m running those times that they’re running (at St. Joe’s), so I feel like I’m going into college with a pretty good starting spot,” she said. “(Heading towards the postseason), I just wanna increase my speed, improve my arm strength, leg strength, jump a bit higher, and overall, just increase my track ability.” Hatboro-Horsham junior Nicolette Attarian-Kimble jumps off the blocks in her heat of the girls 100 meter race at the Hatter Invite on Friday April 30, 2021. She would place third in the event. (James Beaver/For MediaNews Group)

The Panthers’ Donya Baxter won the shot put with a throw of 31-2 and took first in the discus with a mark of 85-11.

Springfield-Montco’s Caitlin Beecham had a 20.05 to win the 100 hurdles.