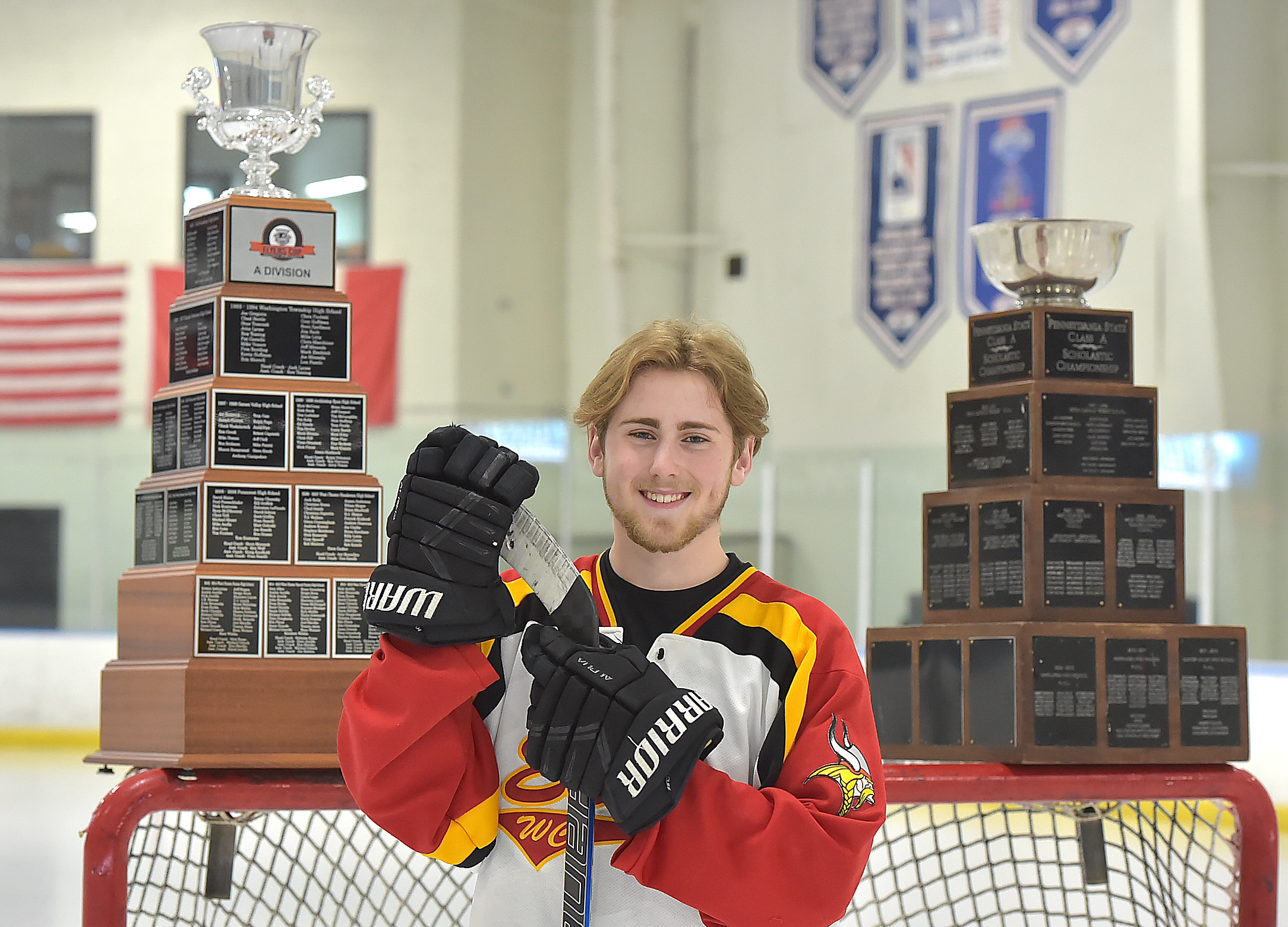 West Chester East’s Tristan D’Elia poses at Ice Line with the AA Flyers Cup and the Pennsylvania state championship trophy, both of which he helped the Vikings win this month to cap off a perfect season. (PETE BANNAN — MEDIANEWS GROUP)

Plenty of Chester County teams have won Flyers Cups before. More than a few of those have followed up one trophy with another in the Pennsylvania state championship.

But no Class A team has ever done what West Chester East did earlier this month.

Bring home both trophies, and not suffer a single loss along the way.

The Vikings are undoubtedly special, as their perfect 20-0 record and overcrowded trophy case shows. East boasts four powerful lines, multiple stalwart defensive pairings and a depth of talent incomparable to any other team in the state.

But at the head of that full roster of talent is one player who steers the ship: senior forward Tristan D’Elia. The captain stands out for his valuable offense, season-defining leadership, and drive to become a better player.

His cumulative resumé throughout the season caps an incredible career at East, and earns him the title of 2020-21 Daily Local News All-Area Boys Hockey Player of the Year.

D’Elia lives in the West Chester East area, but is a student at the Philadelphia Ice Hockey Academy, which combines hockey training and academics. He transferred from Malvern Prep as a sophomore.

His daily routine consists of two things: school and hockey. He wouldn’t have it any other way.

“Every day we’re on the ice twice and in the gym once,” D’Elia said. “You can’t ask for anything better.”

D’Elia put on skates before most kids learn to tie their shoes, at the age of 4.

“I have two older brothers who played hockey, and that’s what really got me into it,” D’Elia said. “My family just put me on skates, and I haven’t looked back.”

D’Elia started playing at West Chester East as a sophomore. He has been consistently successful on the stat sheets, but head coach Eric Wolf says he has seen immense growth in D’Elia’s play, far past the box score.

West Chester East’s Tristan D’Elia poses at Ice Line with the AA Flyers Cup and the Pennsylvania state championship trophy, both of which he helped the Vikings win this month to cap off a perfect season. (PETE BANNAN — MEDIANEWS GROUP)

“He has transformed this year,” Wolf said. “He has more assists than he has goals. That wasn’t his game before.

Last year, Tristan was scoring all the goals because we weren’t as deep,” Wolf added. “He recognizes that he has more around him and he includes them and gets them involved.”

“Ninety-two points in 41 games against the best competition in the state is pretty darn good,” said Wolf.

His success didn’t end there. D’Elia capped off his incredible tenure at West Chester East with two enormous goals in the state championship game against Indiana High School.

“I could not have drawn it up any better,” D’Elia said. “It’s just a great way to remember my senior year.”

D’Elia has accomplished just about everything high school ice hockey has to offer. He even earned his team’s MVP and best offensive player award for two consecutive seasons.

But he is not done yet. D’Elia got a taste of high-level hockey playing at the state championship, but he is still hungry.

Upon graduation, he will play for a junior hockey program to continue developing his skills, and hopefully joining his brothers Stephen (Duquesne) and Joey (Penn State), in playing at the collegiate level.

“I’m going to focus on being 100 percent committed to becoming a better player over the next two years in juniors,” D’Elia said. “Hopefully, I will end up achieving my goal of playing NCAA hockey.”

Between the family’s four athletes, the D’Elias have watched their fair share of ice hockey this year, and it’s not over yet. Tristan’s sister Thalia is competing for the national championship with the Junior Flyers 16-U girls team this weekend at Ice Line, alongside this year’s DLN girls hockey girls hockey player of the year, Ava Thomas of Downingtown West.

Although D’Elia’s time at East has come to an end, he is very confident this is not the end of the Vikings’ dominance over the Ches-Mont hockey scene.

“I could see West Chester East being the top team for at least the next three years,” D’Elia said. “I expect nothing but greatness from them. I have full faith in these guys, they could do it again.”