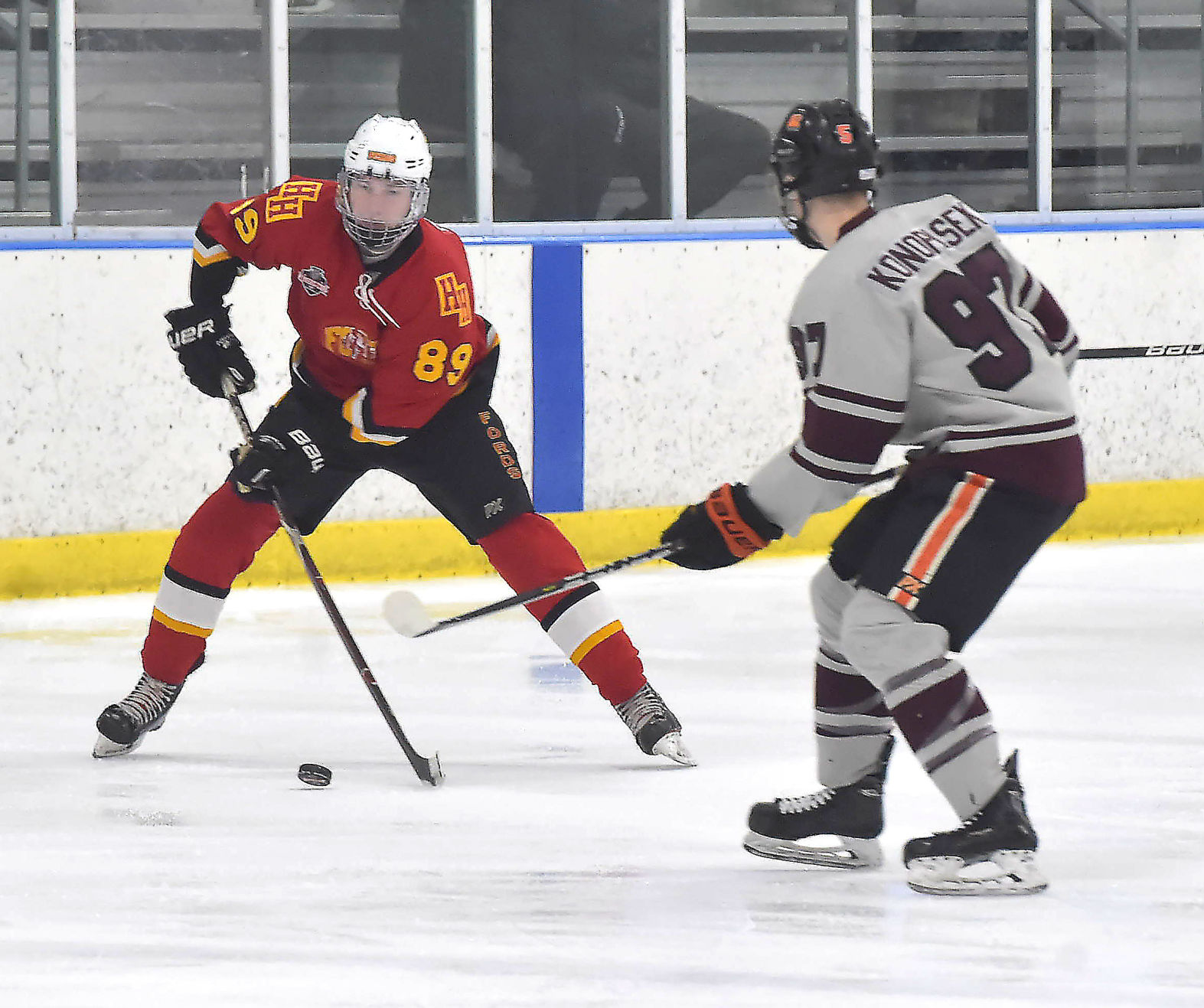 In addition to Player of the Year Jagur McClelland, the rest of the 2021 All-Delco team includes:

Jacob Orazi, Haverford: The senior forward and Haverford captain led the way in a storybook season for the Fords, winning the Central League crown and Flyers Cup AA. Playing on a wing with McClelland, Orazi was a formidable running mate, with the defensive sensibilities of a center to be difficult to play against in all zones and the skill on the puck to create scoring chances out of nothing. Orazi finished with 21 goals (third in Delco), 26 assists (second) and 47 points (second). He was the leading scorer in the Flyers Cup AA with seven goals and six assists over four games, including a hat trick plus two assists in the quarterfinals and two goals, including the game-winner, in the victory over Downingtown West in the final. Orazi scored a goal and four assists in the first round of the tournament.

Zach Crain, Springfield: The junior center was the Cougars’ top skater, leading the Central League finalists with 15 goals, 20 assists and 35 points. Those tallies rank tied for sixth, fourth and fourth, respectively, in Delco this season. A fluid skater with long strides and good hands, Crain scored two goals to go with two assists in the playoff win over Ridley. He assisted on both Springfield goals in a 3-2 loss to Cardinal O’Hara. In the Flyers Cup A quarterfinal loss to Sun Valley, Crain scored a goal and an assist in willing the shorthanded Cougars to overcome a two-goal, third-period deficit and get to OT.

Walter Clauss, Strath Haven: Always a stellar defensive forward, the senior added more offensive pop to his game for the Panthers, who finished second in the Central League standings and made the Flyers Cup A semifinal. Clauss led Haven with 16 goals in just 13 games, his goal total the fifth-highest in Delco this season. He added 11 assists for 27 points, eighth-most in the county. That’s in addition to the rangy winger shouldering defensive responsibility on the penalty kill and matching up with other teams’ top lines. Clauss was also the only Panther able to solve West Chester Henderson’s defense in the Flyers Cup A semifinal, scoring the only goal of a 2-1 loss.

Nate Rabadam, Haverford: The junior blueliner anchored the Fords’ top pairing for a defense that allowed just eight goals in 13 regular-season games and 17 total goals in 18 outings. Rabadam often drew opponents’ top lines, pairing with Cally Moran, who made the Flyers Cup all-tournament team. He contributed at both ends of the ice, with his superlative skating ability and constant contributions to the offense as a power-play captain at the point. Rabadam’s 17 assists were sixth in Delco. The total includes three assists in the Flyers Cup quarterfinal against Central Bucks South, a 7-2 win, and two assists in the Central League final. Rabadam logged major ice time in piloting the Fords to 4-1 wins in the Flyers Cup semifinals (over Pennridge) and final (Downingtown West) to lift the program’s first Flyers Cup since 2007.

Max Riess, Strath Haven: The senior did it all for the Panthers, playing either on the blueline or at forward as the moment required. Wherever he was, he produced, to the tune of eight goals and a team-high 22 assists for 30 points. His assist total is third in Delco behind McClelland and Orazi, and he’s sixth in points. Riess had a point in each regular-season game, including two goals and two assists in the opening win against Owen J. Roberts and one and two in beating Rustin. Riess would also hop in to take shifts on the blueline whenever the Panthers had a defenseman in the penalty box or light on personnel for a game, using his hockey IQ and headiness to contribute all over the ice.

Ronan Marley, Cardinal O’Hara: The senior goalie was outstanding, O’Hara’s MVP in standing out against a crowd of talented goaltenders. Against the top competition of the PCL A division, Marley shone bright. In 10 regular-season games, he allowed 19 goals for a goals-against average of 1.89 and a save percentage of .917. After a rough go in the Flyers Cup AAA against Holy Ghost Prep, an 8-1 loss, Marley’s season numbers stand at 2.44 and .898. Marley went 7-4 on the season, pitching a pair of shutouts. He made 29 stops in a 1-0 blanking of Salesianum in February. He also turned aside 29 shots in beating Springfield in early March and 34 in a 5-4 loss to Salesianum on March 31.