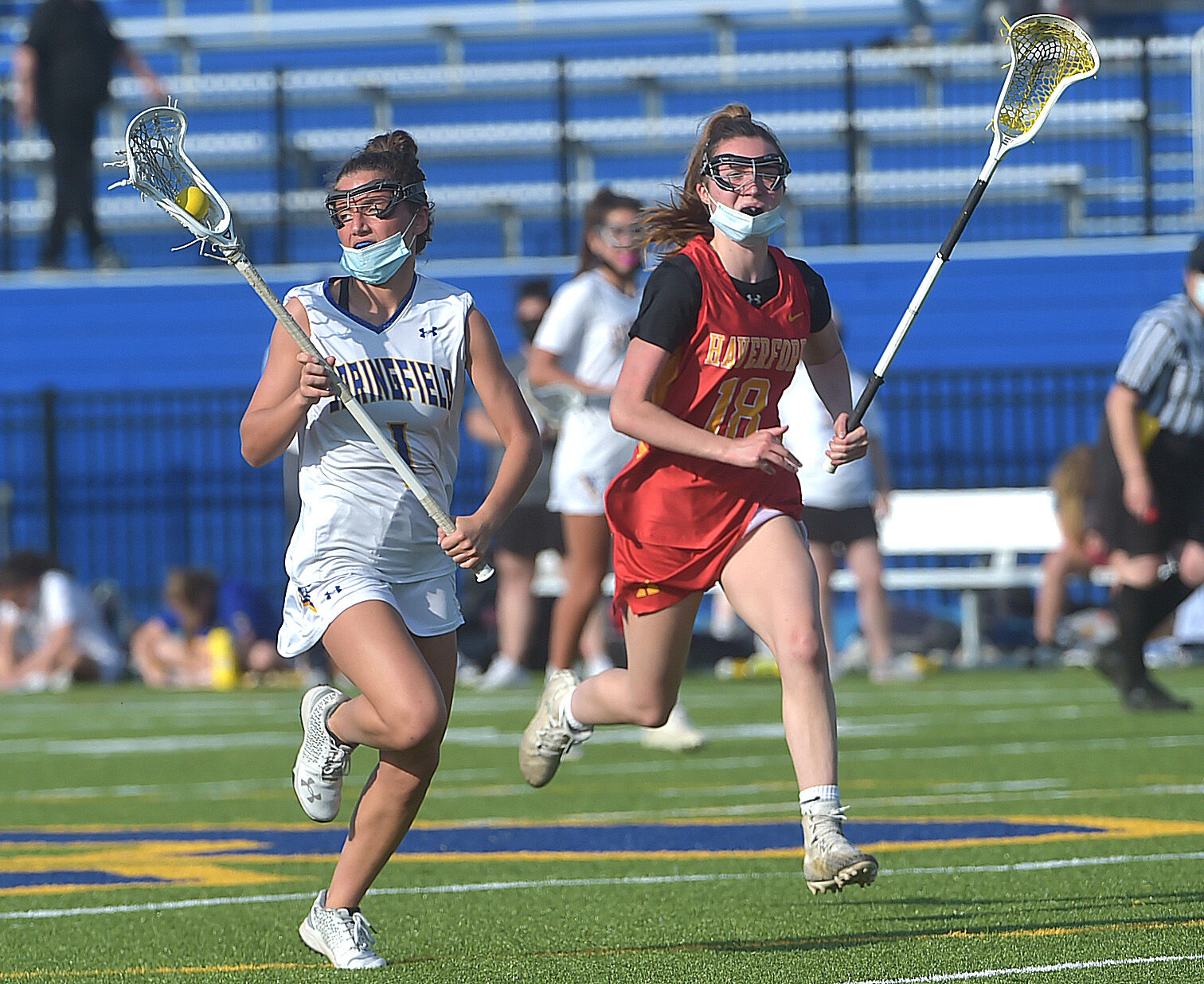 Springfield's Gabby Rizzio, left, carries the ball against the defense of Haverford's Grace Hetznecker. Rizzio scored four goals to lead the Cougars to a 15-6 victory over the Fords. (Pete Bannan/Medianews Group)

SPRINGFIELD – When Gabby Rizzio was a freshman, way back in the before times, she understood the correlation.

That Springfield girls lacrosse team she was part of in 2019 featured 15 seniors, 13 of whom started. It would go on to win a state title.

So in assessing the 2021 squad, with its four seniors – one out with a major knee injury, the other just returning from one – Rizzio didn’t need to be told that juniors like her would have a big role to play.

Rizzio showed the way Tuesday, scoring four goals, including a first-half hat trick to stake Springfield to an early lead in a 15-6 Central League win over Haverford.

The task is doubly difficult for Springfield’s youthful roster, the bulk of which are sophomores and freshmen. With no season last spring, there’s little difference in experience between the classes. In starting three freshmen Tuesday, it took time to settle in and get everyone on the same page, a daily process that Rizzio hopes is accelerating as the season progresses.

“It’s definitely hard to adapt from middle school coming to the varsity level right away,” Rizzio said. “I definitely think this game and last game, we really came together as a team and worked in transition and started connecting on a personal level. I think it’s definitely showing in our games.” Rizzio’s role is to lead by example. She recorded a natural hat trick over less than three minutes in the first half, turning a 2-0 lead to 5-0. The goals were fairly simple in design, mostly straight-line dodges from up top from the midfielder, the first of which drew a free-position shot that she converted.

But Rizzio keeping it simple gave her teammates breathing room on the scoreboard to do the same.

“I think in the beginning, it’s hard for us to bring the energy,” Rizzio said. “As balls start hitting the back of the net and we start making catches and making defensive stops, it definitely brings our energy up and that’s we really come together.”

It isn’t all youth for Springfield (8-3, 4-2 Central). Makayla Cox anchors the defense in front of fellow senior Rachel Conran, who made three saves. The defense is without stalwart Casey O’Connor, who injured her knee in the fall.

The fourth senior, Lauren Johnston, is working her way back from a knee issue, as her heavy brace indicates. She scored her second and third goals of the season.

Not all of the young players are as young as they appear. Anabel Kreydt and Mia Valerio, for instance, have two seasons of high-level basketball with the Cougars under their belt. Valerio had a game-high seven draw controls to go with two goals and an assist. Other sophomores, like Erin DeStefano, don’t look it. She scored five times, including a pair of goals where she curled from behind the cage, tossed a shoulder shimmy at her defender and buried a shot.

“It’s where I’m most comfortable, around the crease,” she said. “Gabby tells me to see it, and I just bang them out.”

Haverford (4-4, 2-4) stayed in the game early thanks to Rory Turner’s four saves in goal, including two free-position denials. The Fords won seven of 10 draws in the first half before Valerio helped negate that edge. Emma Rowland and Jackie Heinerichs controlled five draws each, both adding goals. Grace Hetznecker scored three times.

A goal from eight meters by Hillary Elsner got Haverford within 6-3 at the break. But Rizzio opened the scoring in the second half. DeStefano finished a three-goal run three and a half minutes later to make it a 9-3 game and effectively put it out of reach.

The young Cougars hopes it’s another step toward getting continued improvement within its grasp.

“It was really hard in the beginning finding everybody’s strengths and weaknesses,” DeStefano said. “But as we keep progressing through our season, we keep seeing each other better on the field. No one gets frustrated, not one yells at each other. It’s just a good team.”