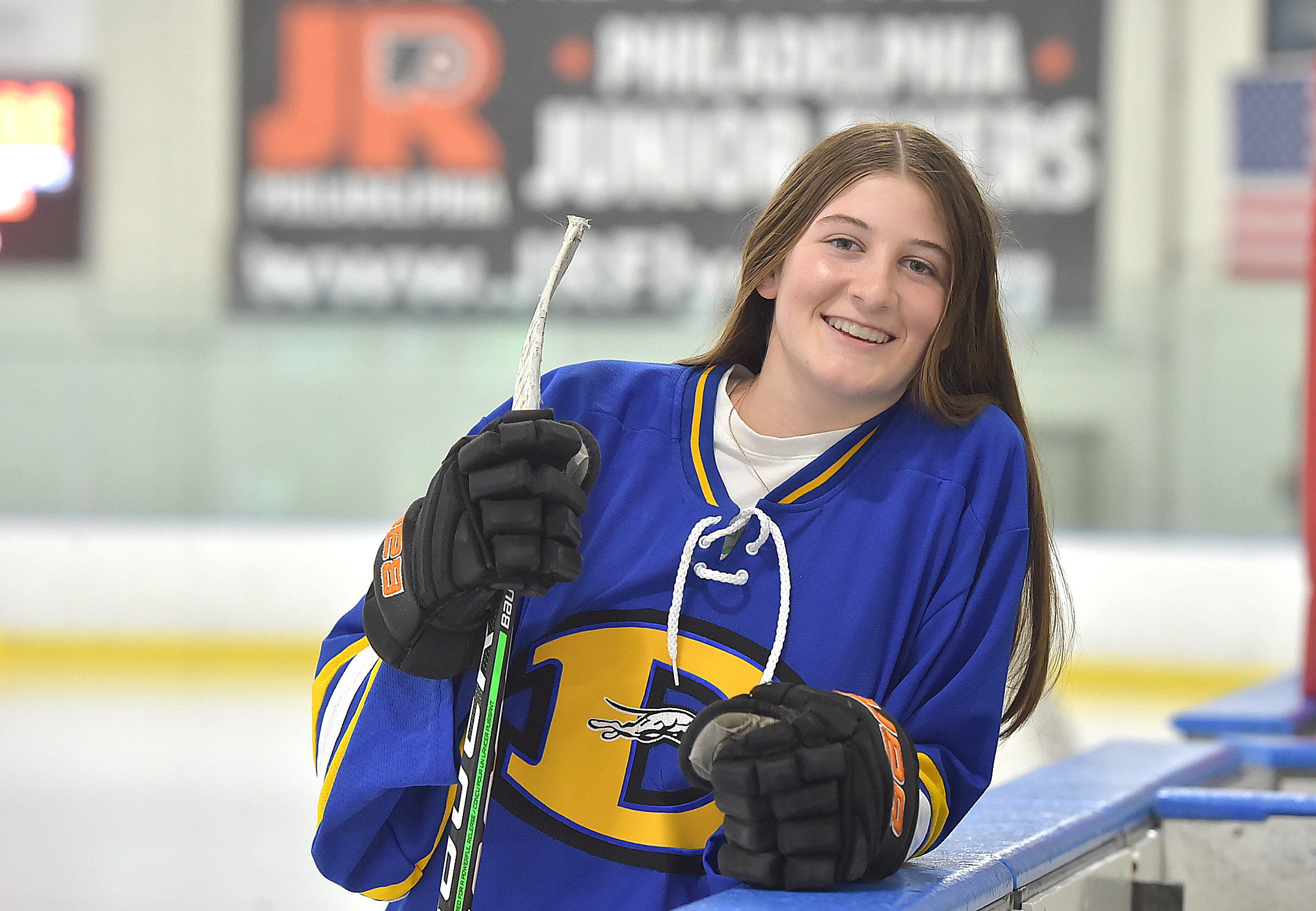 Downingtown West’s Ava Thomas is the Daily Local News Girls Ice Hockey Player of the Year, despite not even being a student at West just yet. (PETE BANNAN — MEDIANEWS GROUP)

That’s despite the fact that Thomas isn’t even in high school.

At just 14 years old and in eighth grade, Thomas is eligible to play for the Downingtown West high school team, since there is no middle school program for her, and hockey is not constrained by PIAA rules about grade level.

The Whippets are very thankful.

She also locked up the honor of being named the Daily Local News 2020-21 All-Area Girls Ice Hockey Player of the Year.

“Ava is definitely a special talent,” said Downingtown West coach Dave Schultz. “We all saw that during the Flyers Cup. She’s a fierce competitor and a great kid.”

Despite her young age, Thomas is already the foremost scorer and playmaker on the ice in any game she plays. And an absolute menace to opposing defenses. With the smaller squad sizes in girls hockey, one talented playmaker can make a very big difference.

“I’ve said it before,” Schultz said. “The sky’s the limit for her.”

The scary thing for the rest of the southeastern Pennsylvania high school hockey scene? Thomas — who will be a freshman at Downingtown West High School in the fall — still has four more full seasons to terrorize opposing defenses and netminders.

Last season, as a seventh grader, Thomas recorded a staggering 54 goals and 17 assists in just 18 games played. She stayed at the top of the leaderboard this season, with 30 total points in just eight games.

There has been a historical lack of opportunity for youth girls ice hockey players. So that begs the question: How did Thomas get so good?

Thomas first picked up a stick at 6 years old, after watching her older brother Trent — now a junior on the Downingtown West boys team — play in games of his own.

As a youngster, Thomas regularly found herself joining Trent and his friends in competitive roller hockey games in their Downingtown basement, quickly learning she wanted to get on the ice herself.

“When I started playing hockey, I played boys hockey all the way up until I was like 12,” said Thomas. “I think playing with the guys really pushes you to become more aggressive and more determined.”

At the time, there wasn’t a league in the area just for girls, so she spent a few years playing in a boys league with the Quakers at Ice Line.

“I feel like it’s getting bigger and bigger each year,” Thomas said of the local girls scene. “And there’s better talent each year. Over time, it’ll be easier for younger girls.”

There are massive age discrepancies in the Whippets’ locker room. For some programs, that reality might have been detrimental, but for West, it was just the opposite.

Coach Schultz described a specific play from the top-seeded Whippets’ 4-3 win over No. 3 West Chester Henderson in the Flyers Cup championship game.

“On Ella Miller’s game-winning goal in the championship, Ava passed the puck and Ella scored,” Schultz said. “The first one to congratulate Ella — of course it was Ava. A tap on the helmet, both smiling as big as could be. She’s right there with them, she fits right in.”

Thomas despite the age difference, seniors like Josie Silberman really took her under her wing.

“It was nerve-wracking at first,” Thomas said. “But I think as soon as I played with all of them, they all accepted me as a teammate and a player.”

Thomas was of course happy to win the Flyers Cup herself, but she was even more excited for her senior teammates.

“I’m really happy for them because it’s their senior year and they’re going off to college next year,” Thomas said. “It was nice for them to end on a good note.”

“It makes me happy that I was a part of it with them and got to share that excitement with them.”

Although she has found her place on the team and in the locker room, Ava could not be more excited to join her teammates at school next year.

“I am excited to be able to see them in the hall or celebrate after a win,” Thomas said.