All-Delco Boys Basketball: Watkins made his own brand of history at ‘the High’ 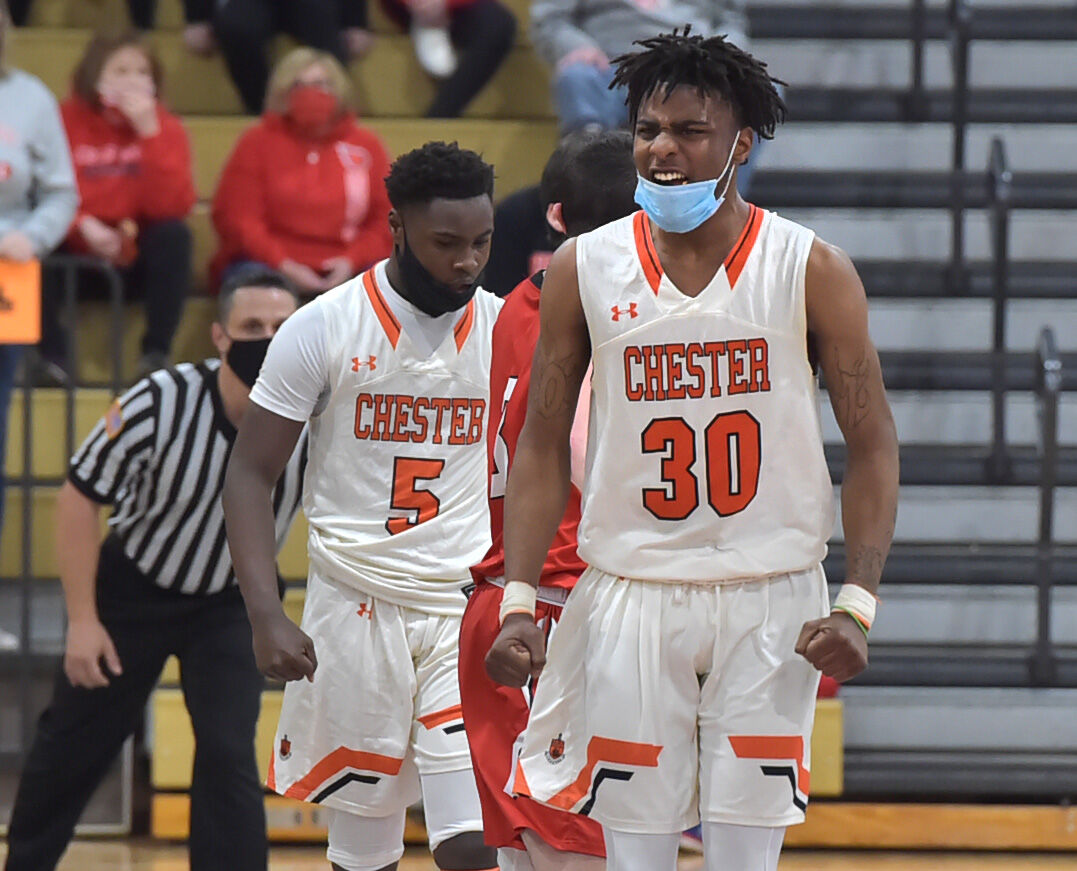 The whispers started soon after the calendar flipped to 2018. There was this kid on the Chester JV team lighting it up. He was tall for his age, but more than that, was able to score in the lane, rebound and shoot. Against JV opposition, to the tune of 30 points per game, it was man-among-boys stuff.

It wouldn’t be long, they said, until that kid would get a look on varsity, at an age when few Clippers were afforded such a promotion. And maybe, just maybe …

The last part of that sentence is often left unsaid in Chester, and powerfully so. Maybe he’d be the one to lead the Clippers back to the PIAA promised land. Maybe he’d be the next one worthy of the city’s basketball lineage. Maybe … such a loaded word when it’s painted in orange and outlined in black.

Three years and more than 1,400 points later, the promise may not have been fulfilled all the way, Karell Watkins admits. But along the way, he built one of the most outstanding Chester careers ever.

It started quietly enough, on a Tuesday night at Interboro, Jan. 30, 2018. In a fairly routine rout of the Bucs, Watkins made his varsity debut with 13 points. He averaged 8.4 points in the next 11 games to wrap up the season. And the rest, as they say, is history.

“It was just an amazing experience because when I was on JV dropping those points, people were like, ‘we see you. We see you improving and see your growth and we want to work with you. Just stay committed, stay focused and your time will come,’” Watkins said. “And then my time came and I gave it all I had.”

All he had was one of the best careers in Chester history, culminating in a second straight Daily Times Boys Basketball Player of the Year honor.

Watkins, Schaller and Seidman were each All-Delcos last season. Five of the six are seniors, only Brown representing the underclassmen. The All-Delco team, even in this most unprecedented of seasons, was selected in consultation with local coaches.

The Watkins superlatives are numerous, starting with the Player of the Year trivia: He’s the first player to earn the award twice since Chester’s Rondae Hollis-Jefferson.

Watkins also passed Rahlir Jefferson in career rebounds with 781, the most in the program since at least the 1992-93 season. Watkins is the only Chester player to average double-figures rebounds for a career lasting more than one season.

And yet as a senior, Watkins managed to find an extra gear. He was the top scorer in the county at 22.5 points per game, leading the Clippers to the District 1 Class 5A title and the PIAA semifinals. Watkins also averaged 12.4 rebounds per game.

“It’s a blessing, saying I’m one of the older guys that left their legacy at the High,” Watkins said. “Even my head coach (Keith Taylor), seeing his legacy at the High. He wanted me to lead this team. That was a blessing more than anything. And just being around Chester basketball period.”

Watkins knows his history, even by Chester’s lofty standards. He has trained with Shaw, whom he said encouraged him along his journey. He stays in contact with Hollis-Jefferson. Few are as qualified as those two to appraise Chester greatness.

Taylor is another exemplary judge. At a school where a state championship is the expectation every year, history lessons are as much a part of practice as anything.

“That was a daily thing,” Watkins said of Taylor. “He’d reinforce that every other day. He would say, ‘Hey we’ve got a chance to win districts.’ At practice, at games, even if it wasn’t a championship game, he’d always be like, ‘you’ve got a chance to make history and play it like it’s your last game, even if it’s your first game.’”

With Chester enduring a brush with the possibility of its last game having already been played due to delays from the COVID-19 pandemic, Watkins played like someone taking nothing for granted in 2021. After missing the season-opener, he scored in double figures in 13 of 14 games for the 13-2 Clippers. He exceeded 20 points nine times, including an outburst of 43 in an 81-43 win over Interboro on Feb. 25. He added 31 in his first game of the season, against Penn Wood, and dropped 30 on Bartram.

Watkins was unstoppable in the District 1 final, with 24 points and 12 rebounds against Rustin, then 19 and 11 in an overtime win over Crestwood.

Watkins fell shy of his goal to bring a state title back to Chester. The Clippers were still alive when the 2020 playoffs were cancelled at the quarterfinal stage, fresh off an emotional win over Simon Gratz (in which Watkins scored a game-high 24 points). This year, the Clippers won the district title, but state glory eluded them, shut down by District 12’s Archbishop Ryan in the semis.

It ended an emotional season, from the toll of playing in mostly empty gyms to the trauma the community endured after last season, with two players who Watkins expected to be teammates this year, Edward “Ricky” Harmon and Ny’Ques Farlow-Davis, lost to the city’s epidemic of gun violence.

The community aspect is always on Watkins’ mind. He’s drawn so much inspiration from people like Shaw and the Jeffersons. The thought that his name will soon adorn the banner in the Fred Pickett Gymnasium for others to look up to is a poignant way of it coming full circle.

“That would be a blessing, just seeing people honor my name and being up there, like, ‘Who is Karell Watkins and what is he doing?’” Watkins said. “The coaches can let them know what I did and what it takes to get to what I did. That would be a great moment to be up there to show what I did for the community playing for Chester High.”