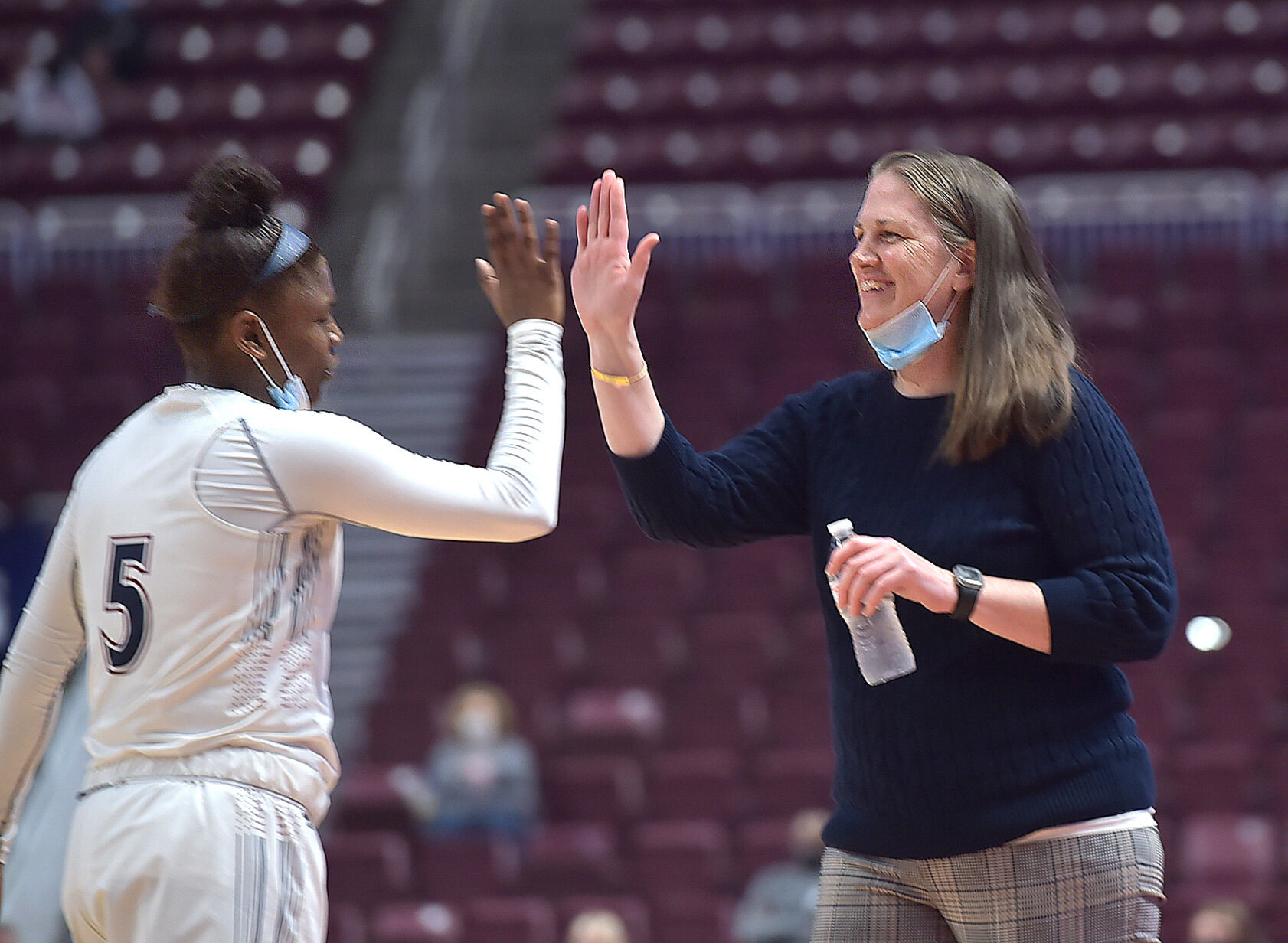 Cardinal O'Hara coach Chrissie Doogan, right, has a high-five for junior Sydni Scott as the Lions celebrate a 51-27 victory over Chartiers Valley Saturday in the PIAA Class 5A girls basketball title game at Giant Center in Hershey. (Pete Bannan/MediaNews Group)

In addition to Cardinal O’Hara’s Maggie Doogan, the 2021 Daily Times Player of the Year, the All-Delco team includes: Cardinal O’Hara’s Amaris Baker, right, is show scoring over Chartiers Valley’s Abbey Vaites as the Lions were on their way to a PIAA state championship, and placing four players on this year’s All-Delco first team.(PETE BANNAN/MEDIANEWS GROUP).

Amaris Baker, Cardinal O’Hara: The senior guard was the floor general for the PIAA Class 5A champions. Her court savvy and leadership were critical to the team’s success. A three-year starter at O’Hara, Baker eclipsed the 1,000-point plateau in her senior year. She excelled in all three seasons with O’Hara after transferring from Baldwin School following her freshman year. The All-Catholic League selection earned All-Delco second-team honors a year ago. Baker averaged eight points and three assists per game. She will continue her basketball career at Kennesaw State in Georgia.

Siobhan Boylan, Cardinal O’Hara: The senior guard/forward was arguably the top defender in Delaware County. A first-time All-Delco selection (she earned third-team honors last season), Boylan had a breakout campaign and it’s hard to imagine the Lions winning the PIAA Class 5A state championship without her steady, all-around play. Boylan often guarded the toughest players on the opposing team, regardless of size and ability, and was excellent in big games. Offensively, Boylan possesses a strong mid-range game with the ability to knock down the 3-ball. An All-Catholic League honoree, Boylan averaged eight points and four rebounds per game. She netted 10 points in the state final. A three-year starter, Boylan was instrumental in the Lions’ brief rebuilding phase as a sophomore and helped lead the program to the top of PIAA Class 5A in her senior year. She will play college basketball at Marist.

Sydni Scott, Cardinal O’Hara: The junior guard and two-time All-Delco is one of the most dynamic players in the county. Scott was brilliant in the Lions’ state championship victory in Hershey, scoring a game-high 16 points with four 3-point field goals and two steals. The All-Catholic League and all-state selection posted averages of 11 points, four rebounds and four assists per game in her junior campaign. She was the engine that drove O’Hara’s fast-pace offense. Scott is a tremendous ball handler with a knack for the big shot. Her lockdown defense created fastbreak opportunities for O’Hara’s quick-strike offense. Scott has thrived as one of the top guards in the Catholic League since her freshman season. Maeve McErlane, Notre Dame: The junior guard is the best player at her position in Delaware County. The two-time All-Delco and Drexel Hill resident was also the top player in the Inter-Ac League this year. A Player of the Year candidate, the only thing stopping McErlane was the fact the Irish played only nine games in a pandemic shortened season. Despite the abbreviated schedule, McErlane dominated, leading her school to one of its best seasons in the last decade. She carried the Irish to an 8-1 record and first-place finish (the Inter-Ac played a non-championship, league-only schedule). She was the leading scorer in Delco at 21.4 points per game, including a pair of 30-point performances in key wins over perennial league champion Germantown Academy. She added 7.4 rebounds, 4.1 assists and 2.4 steals per game. McErlane announced her commitment to DePaul University in February.

Rachel Conran, Springfield: The senior guard earns her first All-Delco selection after a breakout season in which she led the Cougars to Central League and District 1 Class 5A championships. A captain on and off the floor, Conran took her game to another level in her senior year. A four-year starter, she has been a terrific 3-point shooter since her freshman season, but in 2021 she was the floor general on a 21-1 team that went toe-to-toe with the eventual state champion neighbor Cardinal O’Hara in the PIAA Class 5A semifinals. Conran worked to become a more well-rounded scorer and made steady improvements to her defensive game. She averaged 14 points per game in her final high school season. One of Conran’s best performances happened to come in the only game Springfield lost this year. In her swan song at Springfield, Conran poured in a game-high 17 points in a 40-28 defeat to O’Hara in the state semifinal.