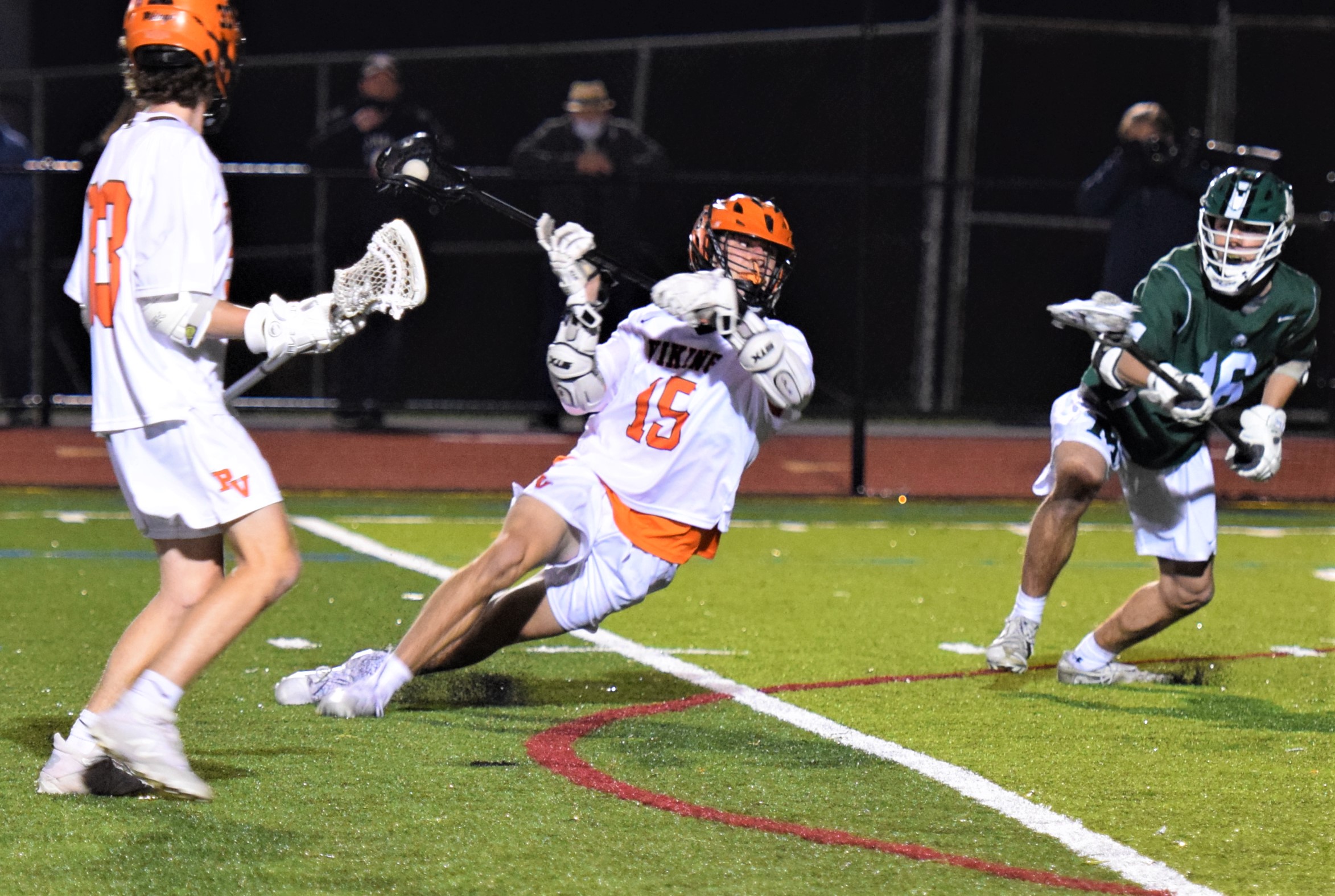 GRATERFORD >> After enduring almost two years away from the field, Perkiomen Valley’s boys’ lacrosse team has made up for lost time in the first several games of the 2021 season.

On Senior Night, Jack Scaliti and his classmates gave the Viking faithful yet another memorable moment in a season destined to be remembered for thrilling finishes.

Scaliti’s second goal of the game came with only 15 seconds remaining in overtime to give the Vikings a come-from-behind 7-6 victory over Methacton at Thomas J. Keenan Stadium.

The contest matched the final two unbeaten squads in Pioneer Athletic Conference lacrosse, and judging by Friday night’s result, the margin couldn’t be much slimmer.

But for Perkiomen Valley (5-0) – who never led at any point in the contest – the result underscored the program’s against-all-odds mentality that’s become a calling card over the past several years.

“I was not playing my best game at all tonight,” said Scaliti, echoing a common sentiment from players and coaches after a contest filled with turnovers and penalties that boiled down to a survival-of-the-fittest approach well before the overtime winner.

That game-winner goes down in the book as an even-strength goal but initiated as a man-up situation for Perk Valley after Methacton was flagged with 49 seconds to play in the overtime after seemingly regaining possession. With Matt Farrington (two goals, one assist) starting the play, Methacton’s slide caused Scaliti to step up on the play and take a pass from Farrington. Just as the Methacton penalty ended, Scaliti fired from about five yards out while falling to the ground, beating the Warriors’ Owen Avelar (not an easy feat on a night when the junior turned in 14 saves) and placing the Vikings alone in first place in the PAC.

Perkiomen Valley’s Sam Nice tries to get past Methacton’s Nik Leahan during the second half Friday. (Austin Hertzog – MediaNews Group)

The goal touched off the second wild postgame celebration in as many weeks as Keenan Stadium, as Scaliti flung his stick several yards downfield (‘I just got that stick yesterday,’ he shared) in a scene reminiscent of the aftermath of the Vikings’ 8-7 victory over Spring-Ford just 14 days ago.

Scaliti was the ultimate hero in a game filled with starring roles on both sides. Aside from Avelar’s aforementioned brilliance, Methacton received a natural hat trick from junior Gunnar Seaman, staking the visitors to an early 4-1 advantage before Scaliti and Farrington tallied to bring the Vikings within 4-3 at the half.

Matt D’Orsogna’s second goal gave Methacton back a two-goal lead three minutes into the second half while a Warriors defensive unit led by Quinn Shields, Matson Leggin, and midfielder Justin Gumienny made life miserable for the PV attack and midfield.

“That’s what we mean when we talk about playing Methacton lacrosse,” said coach Matt Saxon. “It comes from the Cougars [youth program] and it reflects in our on-field play. Beat the guy in front of you.”

Before the season, Saxon predicted his squad could “really turn some heads” in his first season of on-field action. The Warriors backed up their leader’s words with a 4-0 start to the season, and in spite of Friday night’s setback stand poised to make quite the statement when they travel to perennial local powerhouse Spring-Ford on Thursday.

Methacton goalie Owen Avelar makes a save on a shot by Perkiomen Valley’s Jack Scaliti in the seocnd half Friday. (Austin Hertzog – MediaNews Group)

The Warriors turned quite a few heads in the early going Friday, but a failed clear allowed PV junior Dane Hagen a wide-open net to even the game at 5 with eight minutes left in regulation. “The initial shot came from Sam [Nice],” recalled Hagen, “and I was just fortunate to beat their two defenders to the loose ball.”

Methacton’s Justin Sanelli gave his side back the lead, converting a PV turnover with 3:32 left, but Nice responded just a minute later for the Vikings, setting the stage for Scaliti’s OT heroics and placing the Vikings in the driver’s seat to claim their first title since boys’ lacrosse became a PAC sport in 2007.

“They’ve had so much taken from them, after (missing out on) last season,” added Hagen. “This is for them, and for every senior class that came before them.”

Boys’ lacrosse became an official PAC sport back in 2007, but the Vikings have been unable to climb to the top of the ladder in that time, always blocked by the league’s giants — first Owen J. Roberts, and more recently Spring-Ford.

But after PV topped both longtime tormentors earlier this season, upstart Methacton (4-1) stood as the most formidable remaining obstacle to PV’s best chance yet to capture conference hardware.

Both squads entered the contest at 4-0, and with Methacton yet to face preseason favorites Spring-Ford, the Vikings are now in prime position to claim their first-ever PAC title with no league playoffs scheduled for 2021.

Even after the excitement of Friday night, coach Bryan Churchey, who’s been there since the beginning, knows better than to celebrate too soon.

“We’ve been approaching every game, every team, with a ‘1-0’ mentality. Coaches are up, watching film in the morning of the next team we play the day after each win. We don’t take anyone lightly; we treat every team the same.

“It’s challenging. But we bring our best competition to our practices. We go after one another as hard as anyone.”

Churchey starred on the first PAC version of the Vikings during his senior season in 2007 but watched as Spring-Ford and OJR would meet for the first of 11 consecutive championship tilts. As Vikings’ head coach, Churchey led PV to the PAC title game in 2018 and 2019, only to fall to the Rams, who claimed their seventh and eighth consecutive league titles.

But two weeks ago, PV’s landmark 8-7 win over the Rams not only opened the 2021 campaign but ended SF’s 53-game conference winning streak. It also allowed PV to control their own destiny in the title hunt, and the Vikings haven’t blinked.

“I believe in these guys 100 percent,” Churchey said. “We’ve got grit. We did not play clean tonight, by no means was this our best game. But if you want to be a championship-caliber team, you have to step up and make the plays when they’re available. Jack (Scaliti) and the rest of the team did that tonight, and I’m very proud.”

For the 13 Perkiomen Valley seniors, Friday was cause for celebration — of their scholastic lacrosse careers, of the heart-pounding finish, and for taking a big step towards becoming the initial PV class to etch their names in the annals of PAC lacrosse champions.

“When I think about this class – they’ve been through a lot, the entire program has,” said Churchey. “Back in June, we chose leaders, because I knew I wouldn’t be able to coach my team for some time (because of COVID).

“I told them ‘I have all kinds of belief in you guys.’ I told them they had everything it takes to be one of the best teams in program history. They’re the most selfless, team-oriented group we’ve had. I’m so proud of their leadership, and that’s the reason we are in this position.”