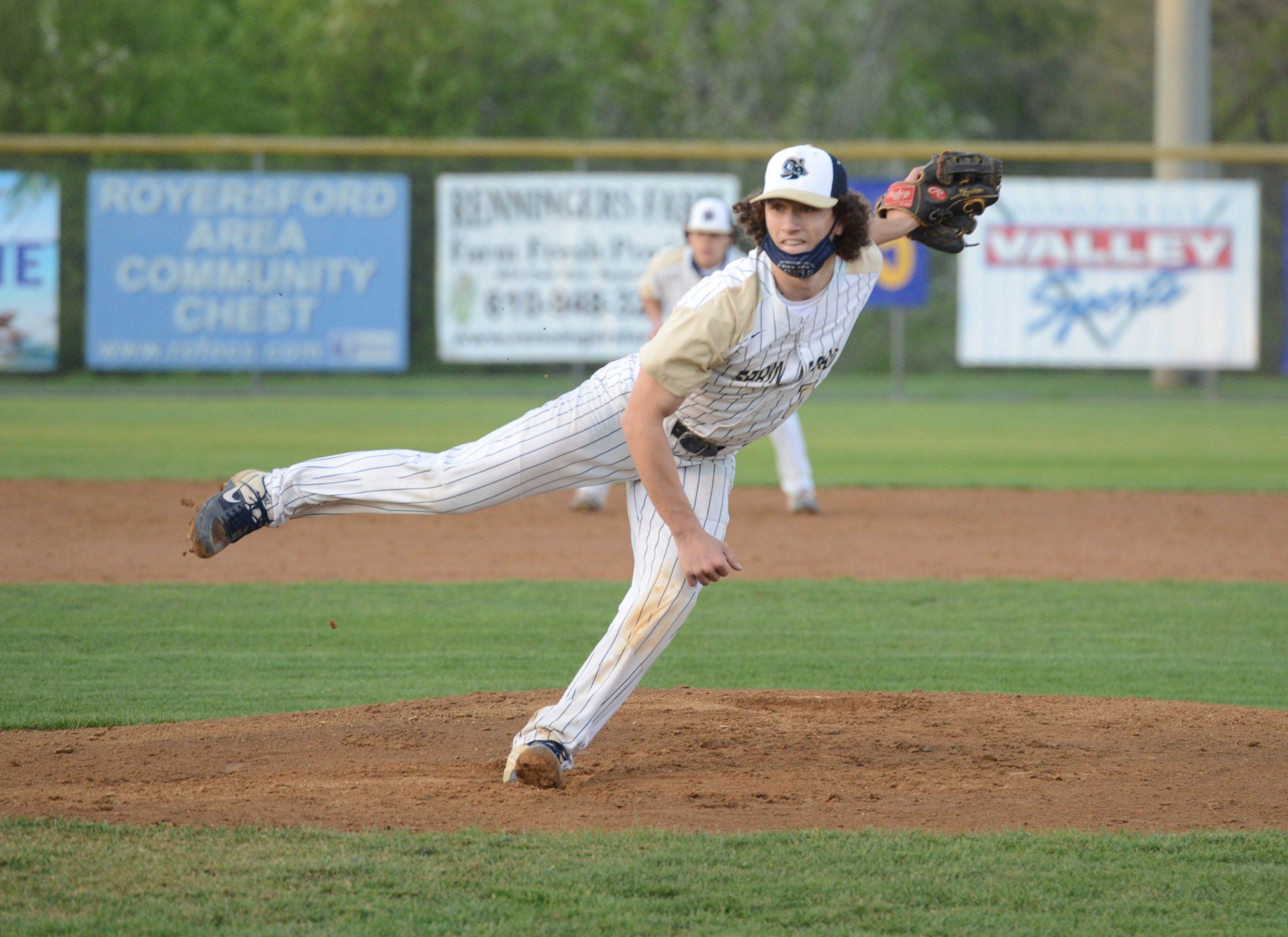 ROYERSFORD >> Jack Kisela swapped his ice hockey skates for baseball cleats less than two weeks ago when the Spring-Ford ice hockey team fell in the second round of the Flyers Cup.

It took no time at all for the Rams’ senior to get comfortable on the baseball diamond, particularly on the pitching mound.

In his second start of the season Monday night against Upper Perkiomen, Kisela dominated for the second time.

He tossed a complete game shutout in the Rams’ 10-0 win over the Indians in a Pioneer Athletic Conference crossover game that ended after six innings due to the 10-run rule.

“They kind of overlapped so there was the split mentality there, but once hockey ended it was just full on baseball,” Kisela said. “You’ve just gotta embrace the mental grind.”

“It’s hard to not have confidence when you’re just throwing strikes,” he added. “They were putting the ball in play but we were getting outs.”

Kisela allowed just three Upper Perk (2-0 Frontier, 2-2 PAC) hits in his six innings of work. He hit two batters but didn’t give up a walk, while striking out nine.

A week ago against Boyertown in his first start of the season, the Spring-Ford (3-0 Liberty, 4-1 PAC) righthander took a no-hitter into the sixth inning before finishing with a line of 5.1 innings pitched and two runs allowed. Spring-Ford improved to 3-0 in the PAC Liberty and 4-1 in the league which is tied for league-best with 4-1 OJR and Perkiomen Valley.

A line drive homer by Spring-Ford senior right fielder Billy Bean to straightaway center opened the game’s scoring and started a three-run third inning to put Spring-Ford up 3-0 after three. Following Bean’s homer, the Rams scored two of those runs with two outs

Spring-Ford’s lead grew to 6-0 by the end of the fourth and with Kisela cruising on the mound a four-run sixth by the Rams, capped by a two-RBI double from Aydan McNelly, ended the game an inning early.

Senior second baseman Jarrett Gordon went 3-for-4 with a triple, and junior shortstop Griffin Straface and Casamento both tallied a pair of hits and stole two bases to guide the Rams’ offense to its second double-digit run total of the season.

“We had two outs in the third inning,” Bean said. “It felt good just to break it open, get some runners moving, get some hits, timely hitting.”

“There’s nobody we have on this team that can’t hit the ball out of the stadium,” he added. “One through nine we can all hit.” On the other side of Monday’s loss was a young Upper Perk squad taking its second straight loss and first true licking of the season.

The Indians started their season with a 16-6 win over Pottstown and a 1-0 victory over Phoenixville, the two-time reigning Frontier Division champ and most recent PAC title winning team. They hung with perennial league power Boyertown in a 4-2 loss after trailing by three at the end of the first inning.

But with Kisela mowing them down at the plate, a poor defensive showing and a baserunning blunder squandering their best scoring chance, Monday’s game marked the first time this season the Indians’ youth truly showed.

“That was part of my comments tonight, ‘If you put your best game together, you will compete and have a chance to win every game,’” Upper Perkiomen coach Frank Mercon said. “We were sloppy today and we have not been. In the first three games, we played really good defense. This was uncharacteristic of what we’ve seen in the past week. We’ll rebound.”

Indians starter Evan Wittig, a sophomore, allowed five runs (three earned) while striking out four batters in three innings of work. His line might have looked better if not for a few defensive miscues behind him. Ian Ferrero, Michael Sharadin and Jacob Ankele had the Indians’ three hits.

Mercon wasn’t sure what to expect from his squad this season with a missed 2019 campaign and virtually no offseason because of COVID-19 restrictions.

Four games in he’s been pleasantly surprised and is confident this group’s best games are still ahead.

“Across the bench we are incredibly young,” Mercon said. “Friday we had a freshman and sophomore on the mound against Boyertown. Sophomore today. So the youth is talented, they need to grow. This was a growing game.” The two teams return to division play later this week where they are both unbeaten. Upper Perk matches up with Frontier foe Pottsgrove on Tuesday — moved from Wednesday due to impending weather— while the Rams host Liberty rival Methacton on Wednesday in another game under the lights.

With an early lead on their respective divisions in the standings, both squads are well-positioned to compete for some type of title down the line whether that be within the league or in the postseason.

That will be examined closer at a later date. For now, both squad are trying to stay in the present and focus on the next game.

“Just keep winning,” Kisela said of the Rams’ mindset. “One game at a time, don’t take it too seriously and have fun.”

“I think we’ve been working so hard off the field that it’s hard not to have fun during the games. It comes natural to us. We’re working so hard. We want to compete and that’s how you have fun by winning.”

NOTES >> Casamento earned the belt for Spring-Ford’s most valuable player of the game. Along with catching Kisela’s gem, he drove in a run with a single and caught two runners stealing. He picked off a runner in the third inning that started a double play to end Upper Perk’s biggest offensive threat of the game. “The first pitch I saw he was off a little then (first baseman Jake) Books gave me the sign and we just went after him,” Casamento said. “He was leaning, double play.”