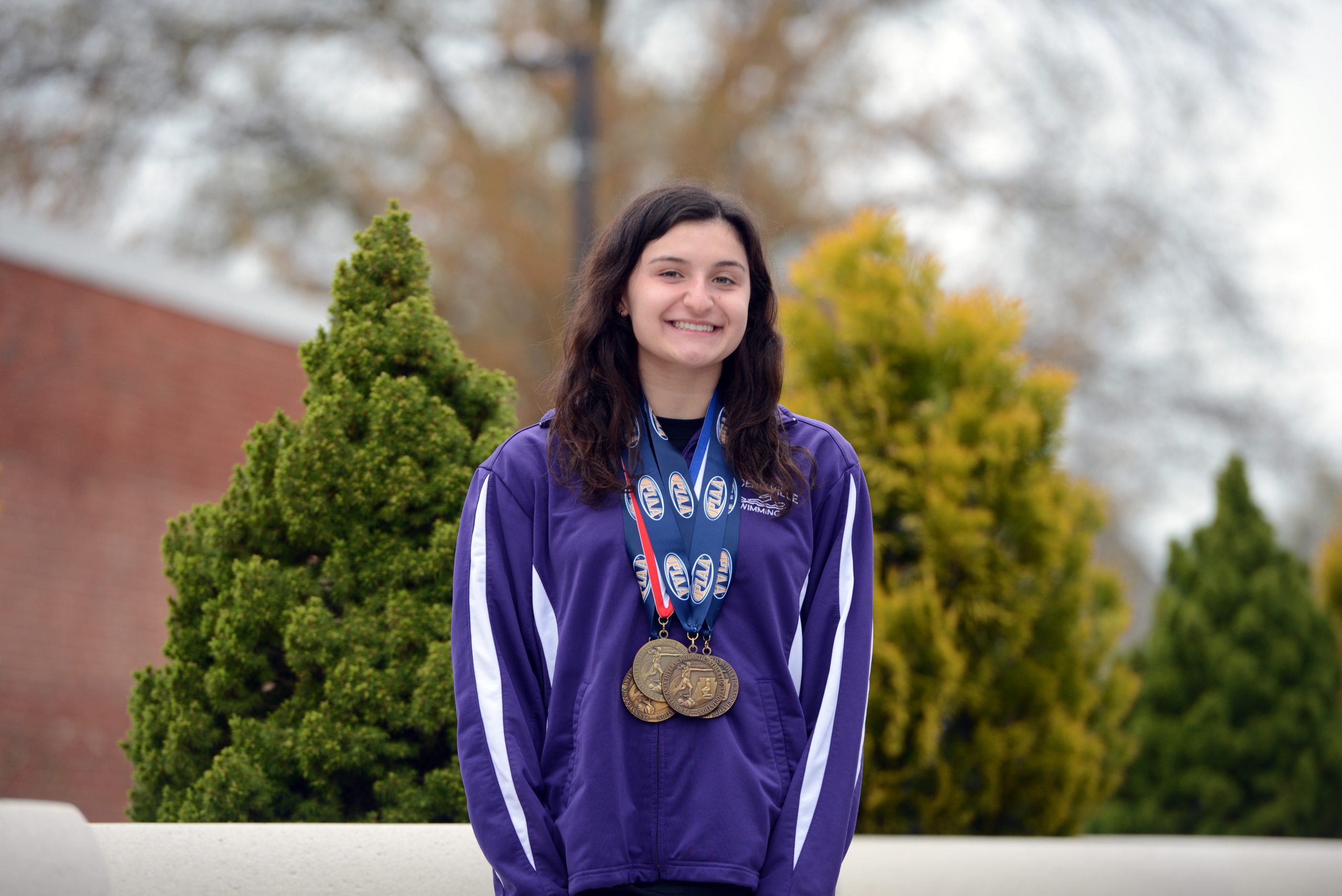 There were times during the past calendar year when she anticipated it would conclude without her getting the opportunity to add any finishing touches.

Luckily for Pappas, consistently one of the area’s best over the last four seasons, that never came to fruition. She got her last winter for the Phantoms and made it count.

Pappas went four-for-four, capping her high school career with a PIAA medal for the fourth straight year when she finished seventh in the 100-yard backstroke at states.

A senior season that almost never happened, had an early season delay and countless other difficulties had a satisfying ending for a career that deserved it.

“I just wanted to do my best no matter what happened because it was unknown in the beginning,” said Pappas, the 2020-21 Mercury All-Area Girls Swimmer of the Year. “But I’m just glad it ended the way it did. I dropped time in my races this past weekend (at YMCA Nationals) and also the whole season. That was a good accomplishment to have, especially because this season was a little wonky.”

Pappas was a model of consistency throughout her career, earning Mercury All-Area first team honors in each of the last four seasons along with Boyertown’s Gabrielle McKee.

In the past four seasons, Pappas earned four PIAA and six District 1 individual medals. She nearly had seven district medals, missing out on a seventh by a tenth of a second in the 100 butterfly this past season. But she added a seventh-place finish in the 200 medley relay with teammates Sarah McCarthy, Sarah Ritter and Kenize Padilla, a freshman state medalist, added another to the collection.

“She’s always been so consistently elite,” Phoenixville coach Dan Weinstein said. “I’ve never seen her have a bad swim or an off day. She’s just always her best. She doesn’t need anybody to fire her up. She doesn’t need big Beats headphones and her playlist. She does her job. And she also always has fun. … She loves to swim and that comes out in her performances.”

Though her medal count and times — she owns the Phantoms’ team records in the 100 back and 100 fly — stand on their own, what’s made Pappas’ list of accomplishments even more impressive is her ability to master multiple strokes.

She has two state medals in two different events — two in the 100 fly as a freshman and sophomore and two in the 100 back as a junior and senior — and is a two-time PIAA qualifier in another, swimming the 200 IM in her first two seasons.

“I think that’s one of my top strengths,” Pappas said. “Not a lot of people have that. Some people are set to be a sprinter or a distance swimmer, but I can do a whole bunch of things which is really cool for me.”

“She could probably qualify for districts in any event she chose,” Weinstein said. It’s a skill she thinks will translate well to the next level when she swims at Fairfield University next year.

“It’s pretty nice to have a bunch of options for me,” Pappas said. “I’m pretty diverse as a swimmer. I can swim a lot of different events. I don’t have any specific ones (that I’m going to swim in college) but I can pretty much do back, fly and IM.”

Like others who were supposed to compete on the second day of the 2020 PIAA Class 3A Swimming championships, Pappas had some loose ends in regards to her finish at states.

She earned a medal because her preliminary time of 55.80 was the eighth best but she didn’t get the chance to swim in the event final because it was cancelled due to the COVID-19 pandemic last winter.

The path to states was tougher than ever before with only District 1 champions and the next best times filling out the 12-person field in each event, but Pappas’ fifth-place finish in the 100 back (56.51) at the District 1 championships got her a spot in states.

This year there were no preliminaries, just finals, and Pappas earned her medal with a time of 56.22 to finish seventh, matching the best PIAA finish of her career when placed seventh in the 100 fly as a sophomore in 2019.

“It was really good closure for her to be denied it as a junior and almost robbed of a high school season at all as a senior and now it really came to fruition districts, states in really closing the chapter on her career,” Weinstein said.

Pappas said her favorite memory at Phoenixville is qualifying for states as a freshman as it came as the biggest surprise. Her superb consistency made a trip to state podium each season routine.

She noted a fourth trip to states and fourth medal finish this year was somewhat underwhelming, in part due to no crowds being allowed in the pool at states due to COVID-19 protocols and in part due to having done it three times already. She went to work when she got home from the race.

But a month later the moment and accomplishment still brought with it some closure and appreciation for the Phoenixville senior.

Along with her records and other accolades and accomplishments, one of the things Pappas impressed Weinstein with was her joy for swimming.

She started each race with a smile and wave on the block whenever her name was called. Her work ethic — developed at a young age in a family with a strong swimming background— made sure there was nothing to worry about on race day.

“She doesn’t ever get too down or too nervous or too stressed out,” Weinstein said. “And that just comes with having a lot of confidence in your preparation.”

She also gives a lot of props for her success to her high school coach, who she considers a father-type figure.

“One of the biggest reasons I did high school swimming is my coach (Weinstein),” Pappas said. “I love him. He’s the best. He’s just such a great person. I’m going to miss him.”

She will be missed as well.

“Versatility, consistently elite, always working hard, always enjoying,” Weinstein said in summarizing what made Pappas so special. “She was never down, a really great attitude, a real pleasure to coach.”