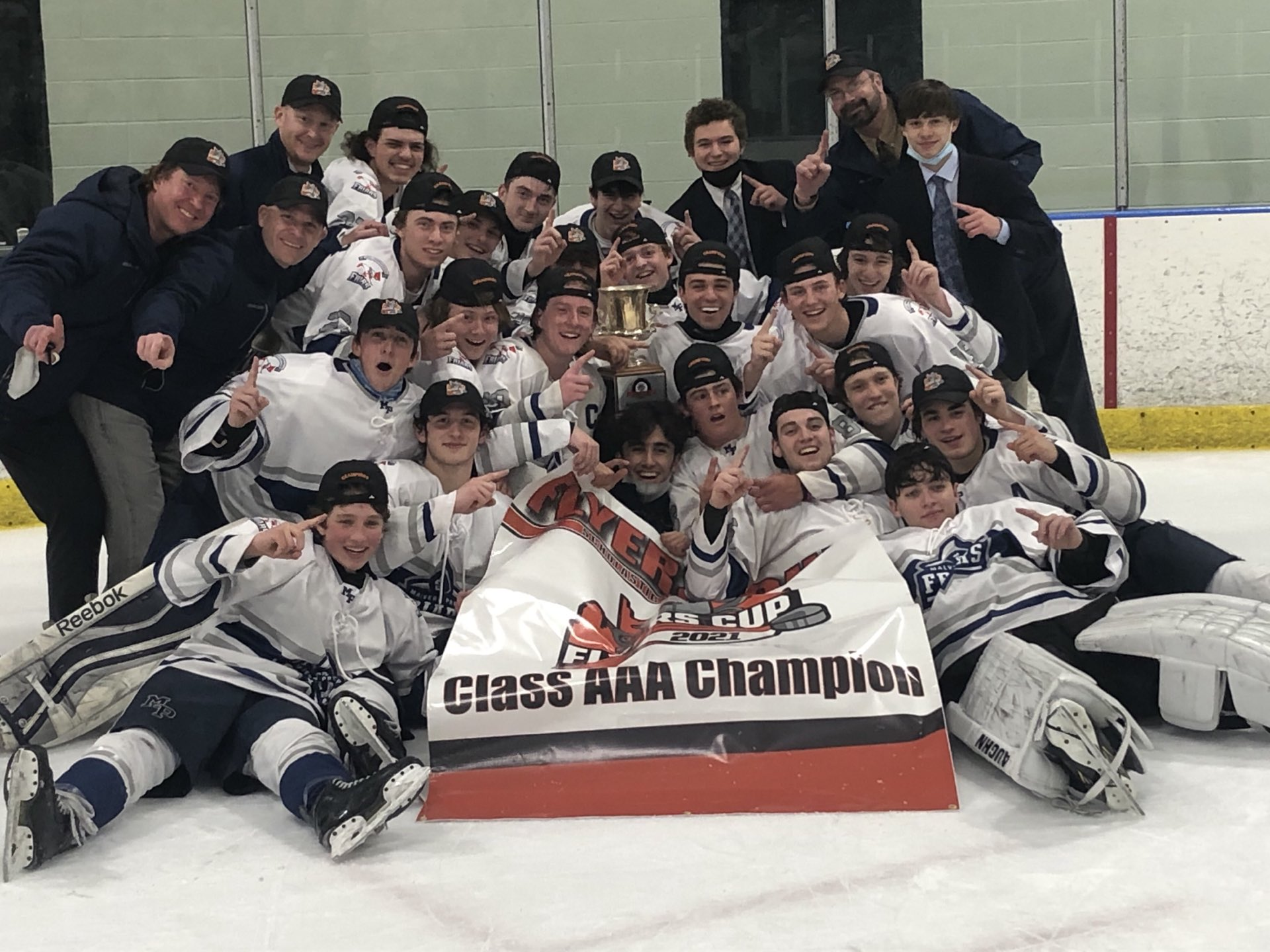 WEST CHESTER >> Just a few minutes after his game-winning shot in overtime gave Malvern Prep a 4-3 win in the Flyers Cup AAA championship final at IceLine Monday evening, Friar sophomore forward Jimmy Jacobs reflected on the fact that his squad won its first Flyers Cup since 2005.

“I’m at a loss for words, honestly,” said a smiling Jacobs. “That’s what I’ve dreamed of, scoring the game-winning goal in a championship game, and it doesn’t happen often. When I saw it go in, I was immediately excited, I wanted to get over to the [Malvern Prep] student section, the atmosphere was amazing.”

Jacobs’ winning shot against La Salle came just 1:39 into the first overtime period, as he scored on a rebound after a shot from Malvern senior forward Ryan Sambuco.

Malvern junior forward Matt Harris, who was named the MVP of the AAA Flyers Cup, said, “At first, I don’t think anyone saw the goal go in, as the [La Salle] goalie kind of fell over and cut our view out, so we couldn’t really see the puck go in the back of the net. But once [Jacobs] threw his hands up, all the emotions came to us, and we just felt great.”

Jacobs said, “When I got the rebound after Sambuco’s shot, I saw a little opening in the [La Salle] goalie’s five-hole, and I slid it in with a backhand.”

Malvern Prep, the No. 1 seed in the tourney, took a 2-0 lead against No. 2 seed La Salle just six minutes into the championship final on goals by Sambuco and senior forward Jack Costabile.

But La Salle slowly battled its way back, cutting Malvern’s lead to 2-1 with 7:13 left in the first period, then tying the score at 2-2 just three minutes into the second stanza. La Salle had gained momentum, and by midway through the second period, the Explorers held a small lead over Malvern in shots on goal.

“We knew it was going to be a fast-paced game, and that La Salle was going to come out and pepper us with shots, said Malvern Prep head coach Bill Kennan. “But we stuck to our game plan, and even though La Salle came back, our team has been resilient all year. It’s a testament to the core leadership group that we have, and it was nice to finish strong.”

The Friars’ lead didn’t last long, as La Salle came right back with a score 10 seconds later to tie the game at 3-3.

Neither team was able to mount a scoring drive in the third period, as the momentum shifted back and forth. Malvern Prep goalie Anthony Perti continued to make saves, and he wound up with 38 stops for the night. At the end of the game, Malvern held a 44-41 shots on goal advantage.

Kennan said, “This was a whole team effort tonight. Our message before the game was that everybody’s got to be bought in. That was our motto all season long, and it came to fruition at the end.”

Jacobs noted, “A lot of people on our team stepped up when [captain] Chris Blango [was injured] against Prep.”

And now it’s on to the Keystone Cup in Pittsburgh for Malvern Prep, who also won the Atlantic Prep Athletic Conference (APAC) with an 8-1 record before its three victories in the Flyers Cup tourney. During its APAC season, the Friars scored 39 goals and allowed only 15.

An emotional Harris said, “I came here as a freshman, and it’s just a crazy [good] feeling to win the Flyers Cup. I’m just so thankful for the opportunities I have here.”

Kennan said, “It’s been a blessing to coach this team. I just want to give a shout out to my wife, we’ve got a couple of young kids, and the sacrifices that my wife makes for our family allows me to do this, to coach a great group of guys.”