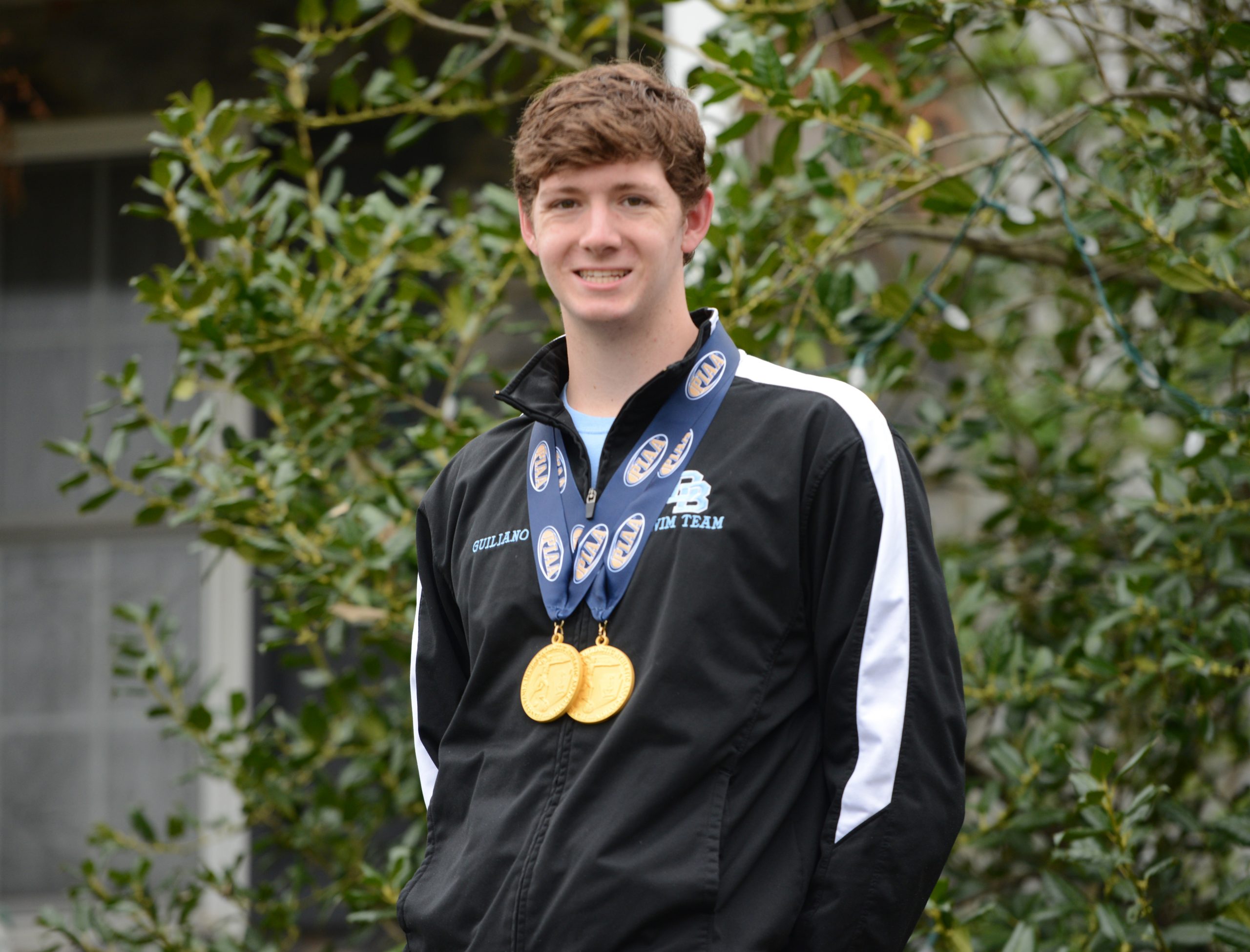 There wasn’t much more to accomplish for Daniel Boone senior Chris Guiliano. There was one thing, however, at the top of his goals for the 2020-21 high school swim season.

Guiliano earned a gold medal in the 200-yard freestyle at the 2020 PIAA Championships, but his shot at two first-place finishes at states was denied when the COVID-19 pandemic wiped the 100 free finals of last year’s meet with Guiliano seeded third after the prelims.

With little left to accomplish in his high school career and a college commitment to Notre Dame already intact, the 2020 disappointment provided Guiliano with a clear objective for his senior season.

“There’s no doubt that he had the goal of going faster in the 50, in the 100 and winning that 100 at states,” Boone coach Chris Breedy said. “It still stings for him that they cancelled that meet last year right after the preliminaries because he think he could have given (top seed Matt) Brownstead a run for his money and he could have.”

Like most of the things Guiliano has put his mind to in his career, it was mission accomplished.

He won both the 100 and 200 freestyle events at states to put a cap on a terrific career that’s included three PIAA gold medals.

“That was awesome,” said Guiliano, the 2020-21 Mercury All-Area Boys Swimmer of the Year. “To actually swim that 100 final, that was something I really missed out on last year. To swim both of them in that finals setting was pretty nice.” Guiliano ends his career with eight total District 3 medals, including five gold, and six PIAA medals, three of them gold, after medaling in two events at states in each of the past three seasons.

He’s the first male swimmer to claim the Mercury All-Area award in consecutive years since Pottsgrove’s Tyler Gross in 2010-11 and 2011-12.

For Breedy, it was always apparent these were the heights Guiliano would reach. For Guilano, it wasn’t always so certain.

“No, not at all to be honest,” Guiliano said. “As a freshman, I made states in one of my events. I was not really looking up to being a senior and actually accomplishing these things. I just always thought it was a big goal to get. To actually go out there and work hard for it and really dedicate myself to it really helped.”

Breedy won four straight PIAA championships in high school before swimming at the University of Florida and on the national and international stage.

Since she began coaching in 1982 she’s coached a number of champion swimmers at various levels. Guiliano’s combination of athleticism and his work ethic and drive have distinguished him in her eyes.

“There are guys as talented as he is,” Breedy said. “But when it comes to being absolutely willing to go through training and do what you have to do, which the training that kids do at that level is something that normal people can’t relate to … it’s kind of ludicrous the work that he does.”

“To be willing to go through that five to six hours hours a day, six days a week, sometimes seven, and to just keep going there and going there for years at a time to reach where he wants to go, it’s not easy. … To go through the training and be coached and do it right, it’s everything.”

As a junior, Guiliano entered the season with hopes of finishing atop the podium for the first time, particularly in the 100-yard freestyle where he placed sixth as a sophomore.

Instead, he earned a bronze in the 100 in 2020 after finishing with the third best time (44.55 seconds) in the prelims and surprised himself with his first gold medal in the 200 free (1:35.81) in his first year swimming the event.

The hope turned to expectation as a senior as he tried to end his career as the best in both events this season.

“Last year, I could play that underdog role,” Guiliano said. “This year, I knew I had a target on my back. I just kind of had to get out there and do my thing.”

Daniel Boone’s Chris Guiliano placed first in the 200 freestyle at the PIAA Championships in 2020. (MNG file)

Guiliano wasn’t quite as fast in the 200 free as he was as a junior but still edged La Salle’s Zachary Kohm by a tenth of a second to win the event for the second year in a row.

Finally getting the opportunity to go for gold in the 100, he eclipsed second-place finisher Daniel Simoes of Seneca Valley by more than two seconds with a time of 43.40 seconds.

He’s the first swimmer since Upper Dublin’s Michael Jensen in 2016 to win the PIAA 100 and 200 free in the same season.

“The win last year felt much better than being the double winner just because it was the first win,” Guiliano said. “But these two felt pretty great to have and to close out the high school career on a positive note.”

“To do that in the relay with the guys for Boone, that was really awesome,” Guiliano said.

He spent the next few weeks resting up before beginning official training for the next big part of his swimming journey last Friday.

On June 7, Guiliano will compete in Wave 1 of the 50 Freestyle Long Course Meters at the U.S. Olympic Trials in Omaha, Nebraska for the first time.

“For him to get experience at that meet, I think it’s like going from minor league baseball to the majors,” Breedy said. “Any other swim meet, even a meet like he went to in Florida, that’s not ‘The Show’ like when you go to Omaha. This is something very different. Plus it’s one and done. You get one shot to do it. It’s something he’ll have to see and experience and come to grips with once he’s there.”

His time of 22.93 seconds, reached at the Toyota U.S. Open in Richmond, Va. last Novemeber, is currently the 59th best time in the country.

“I don’t know what the seedings are like, but I think if I can final I’d be really happy,” Guiliano said.

Regardless of the results, Breedy is confident it won’t be the last time he’s swimming on a big stage.

“The next four to eight years for him are going to be pretty spectacular,” Breedy said.