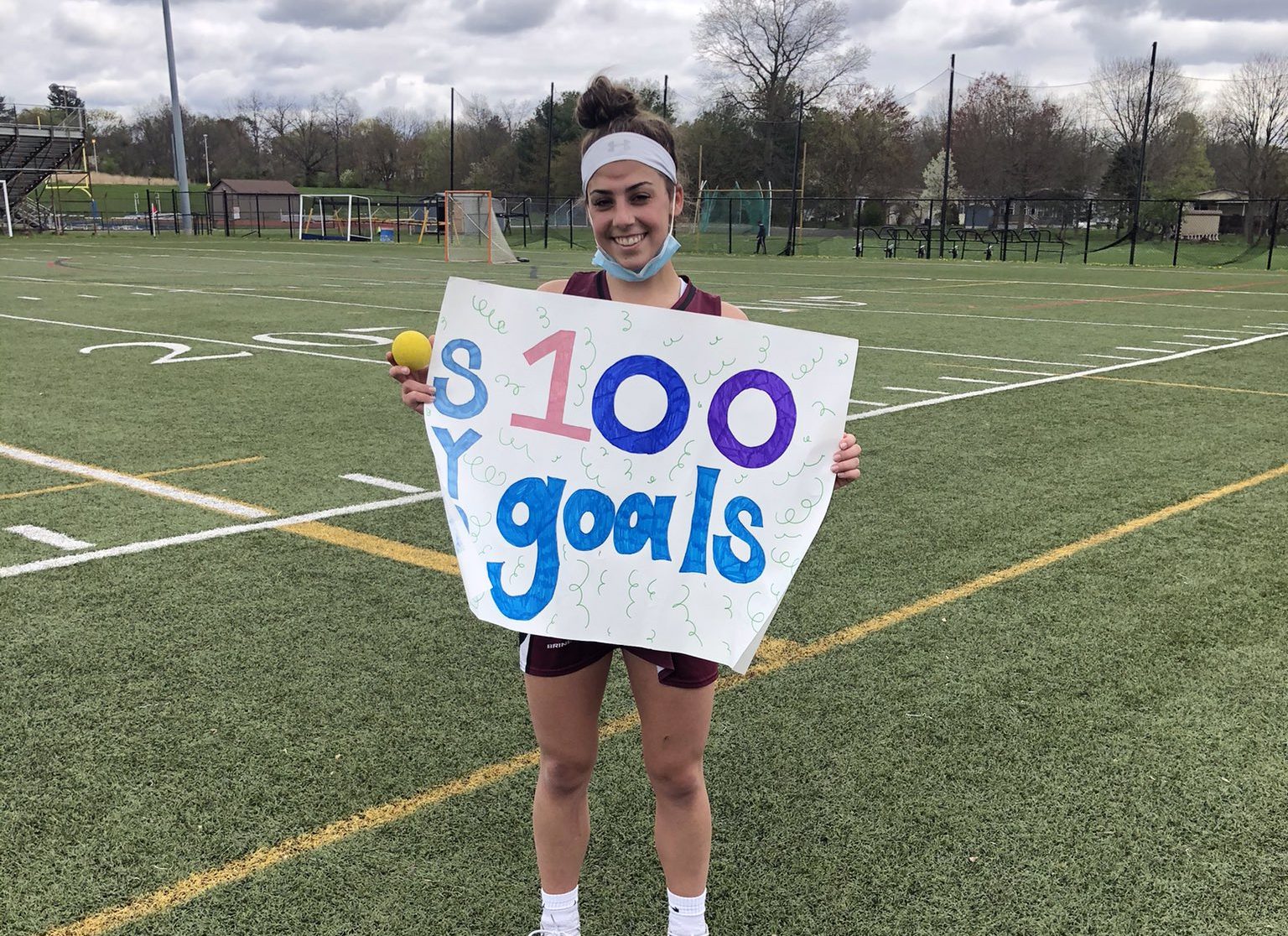 The effort did more than just leave her even with Upper Perkiomen’s Lindsay Bieler for game scoring honors … much, much more.

In addition to helping secure a 10-8 victory for Pottsgrove, the three-goal performance enabled the senior attack to reach the 100th goal of her scholastic career. She also assisted on another goal to help the Falcons keep the Indians at bay through a 6-5 first half.

Alaura O’Neill and Riley Simon (one assist) had two-goal games for the Falcons, Lily Guerrette had seven saves in goal.

Perkiomen Valley 15, Boyertown 6 >> Kaleigh Funk hit the nets for a game-high six goals Saturday, heading a potent offensive that put the Vikings past the Bears in their PAC Liberty Division game.

Upper Merion 12, Phoenixville 7 >> Cat Merritt scored six times to claim game honors, and the Vikings came on stronger in the second half Saturday to roll up a PAC Frontier Division win on the Phantoms.

Alyssa Mozi had a three-goal day for Spring-Ford.

Blakely Doyle (assist), Ava Clemson and Kallie Mullen (7 DCs, 3 GBs) each added a pair of goals in the OJR win. Maggie Kilgallon and Morgan Karas chipped in a goal apiece and both racked up three assists as well. Gracyn Smith and Lexi Muir added a goal and two assists each.

Perkiomen Valley 15, Upper Merion 2 >> After a slow start, the Vikings took control with a 6-0 second quarter to cruise to victory over their PAC hosts Saturday.

After getting nine shots on goal in the first quarter, PV got itself dialed the rest of the way. Jack Scaliti led the way with a two-goal, two-assist game while teammates Dane Hagen, Matt Farrington and Dillon Kane had other two-goal outings. Jacob Klosinski had two saves in goal.

Spring-Ford 17, Pope John Paul II 4 >> Nick Teets’ hat trick headed an offense that got scoring from 11 different players on the way to Saturday’s PAC romp over the Golden Panthers.

Justin Wixted (three assists), Christian Marchini, Aaron Judge and Will Bonowitz each kicked in with pairs of goals for Spring-Ford, Ambrose Colilouri scored twice for PJP, with Dan Maine (11) and Sean Fallon making a combined 12 stops in goal.

Daniel Boone 7, Conrad Weiser 3 >> The Blazers pulled out a back and forth affair with the Scouts Saturday by scoring five times in the fifth inning.

For the Blazers, Zach Scherzer was 2-for-2 with a triple, two runs scored, two RBI and a walk. Tyler McKinney also added two hits and two RBI.

Owen J. Roberts 10, Boyertown 5 >> The Wildcats did all their scoring in their first two at-bats, then held the Bears at bay down the stretch to win Saturday’s PAC Liberty Division tilt.

Jordan Sylvia had a two-RBI day for Roberts, which plated six of its runs in the second. Morgan Sauers had two hits — one a double — and Nicole Kratz also hit safely twice for Boyertown.

Hill School 7, Mercersburg Acad. 2 >> The Blues travelled to Mercersburg Academy to play an 18-hole match at Chambersburg Country Club on Saturday. In this annual event, nine players from each team compete in match play from the blue tees.

The Hill earned a decisive 7-2 victory, winning seven of the nine matches sparked by a total of 13 birdies. Billy Gussler and Lucas Steinmetz each closed out their opponents early on the back nine. Thomas Beaudoin and Marcus Smith also had comfortable wins. Andy Gan and Nick Rafetto both managed to win on the final holes of their matches.

The match is unusual both in format and in competition as the focus is on camaraderie and sportsmanship rather than on winning. All players paused at the turn to enjoy a snack (following all protocols) and the players really enjoyed the fellowship of the day.