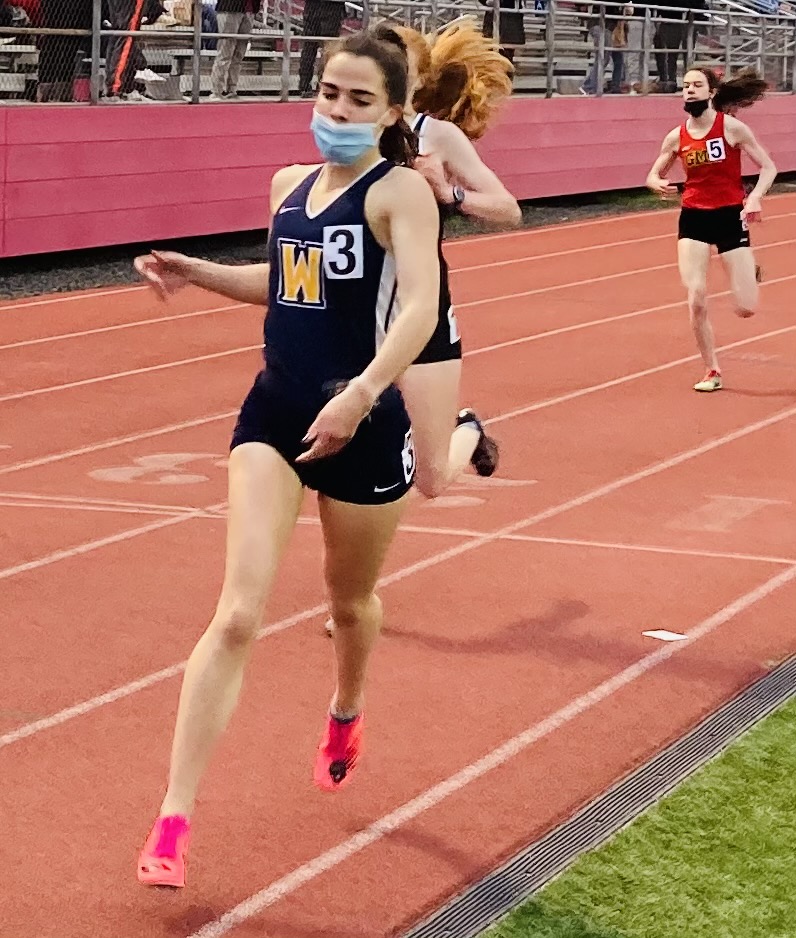 Wissahickon's Mila Jovanovic races to victory in the 800 at The Cardinal Invitational on Friday, April 16, 2021. (Kev Hunter/MediaNews Group)

“Two years ago, I hated this event,” Wissahickon’s Isaiah Marc said of the 400-meter dash. “I thought it was the worst event. And then this year, I proved that I can do a lot better. So I’m really enjoying it. I like it now.”

Marc bolted to a victory in the 400 Friday night as part of a nice showing by Wissahickon at the Cardinal Invitational at chilly Upper Dublin High School.

Marc’s time of 50.06 was not only the fastest of 29 runners in the event, but testament to Marc’s rapid development, and it notched him a spot in districts.

“My coach (Don Betterly) told me he saw a lot in me,” Marc said. “I was scared of this event. But then two meets ago, I ran a P.R. And that time was like 10th in the state.

“I felt really good about it. I realized I could have a future in this event in college.” Closing In >> Marc prevailed in a tough final heat.

He could feel Roman Catholic’s Tyler Boone (second, 50.47) closing in.

“At the end, I stayed strong and finished out strong. (Boone) was one seed above me. I proved I could beat him so that felt good,” Marc said. “I heard him down the back stretch. I got scared as heck. But I kept it strong and I finished strong. It felt good. It was a good race.”

“I love it. We’re all really close,” Marc said of this Wissahickon squad. “Bret and I have been best friends for about a year now, training together non-stop. It’s good to have healthy competition.” Breaking Through >> Wissahickon’s Mila Jovanovic was seeded third in the 800, but it was Jovanovic racing to the front and holding the lead down the stretch of a tightly-contested half mile.

“The Strath Haven girl (Maggie Forbes) really pushed me at the end,” Jovanovic said. “I actually didn’t think I would keep that pace.

“But I did. I guess the crowd made me faster. And then I just tried to give it my all at the end.”

Jovanovic crossed with a winning time of 2:21.67, punching her ticket to districts.

“I contained myself (before the race), tried to stay loose and everything,” she said. “Actually, (this gives me a lot of confidence). Because now I see what I can do and I can give out even more”

Souderton continued to stand out in the field, as Aonghas Evanick threw furthest in the discus with a 126-8 and also won the shot put with a throw of 44-7. Teammate Ayden Stankus took the pole vault, clearing 12 feet.

Big Red’s Katie Mellott won the discus with a 88-8 and teammate Hannah Alderfer won the long jump with a leap of 17-11.75

Upper Moreland’s Gabrielle Teel won the triple jump with a leap of 36-10.5.