PAC Liberty’s best battle it out at Boyertown Invitational 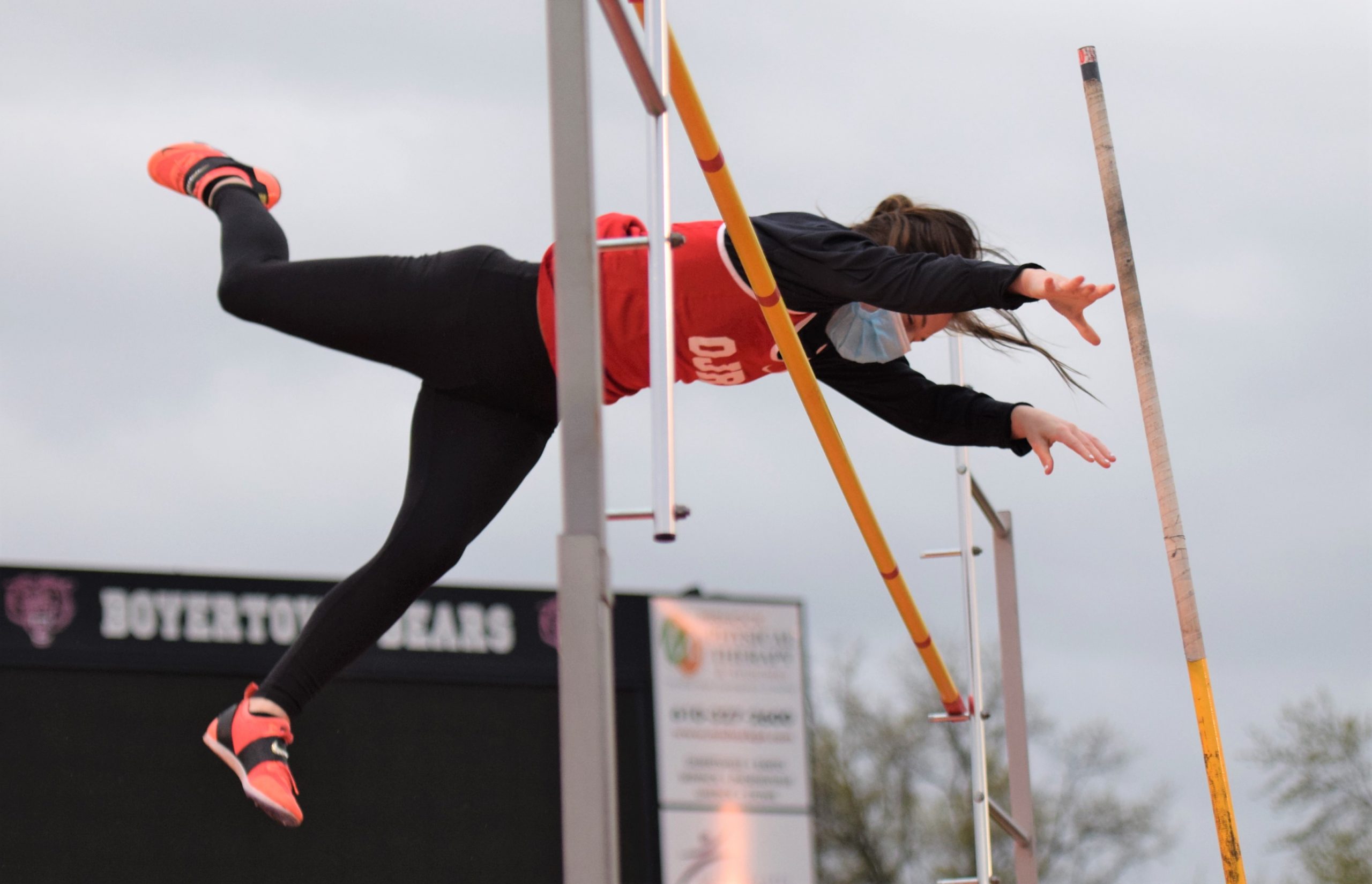 BOYERTOWN >> It’s not the magnitude of a Pioneer Athletic Conference championship meet.

But for league schools whose schedules have been impacted by the COVID-19 pandemic and its accompanying restrictions, Friday’s Boyertown Invitational fulfilled some very essential requirements.

The event brought together the PAC’s six Liberty Division big schools — Methacton, Norristown, Owen J. Roberts, Perkiomen Valley and Spring-Ford alongside the host Bears — for competition on Boyertown’s all-weather track. The meet, which finished under the lights at BASH Stadium, afforded those in attendance an opportunity to hit qualifying times, distances and heights in advance of District 1’s post-season meet the weekend of May 21 and 22. Spring-Ford’s Kyle Kennedy celebrates after a big throw in the discus at the Boyertown Invitational. (Austin Hertzog – MediaNews Group)

“We need to hit district qualifications in the field,” Spring-Ford head coach Danielle Stauffer added. “It’s more important to compete in the field.”

Even while competing in overcast, damp and chilly weather, a number of local athletes made the most of the opportunity to go up against a field of schools they would normally face in dual meets. Some did achieve district-qualifying standards; others showed their stuff against an expanded field of opponents.

Kyle Kennedy, for one, had a productive outing. The Spring-Ford senior was a two-event winner with district-qualifying throws in the discus (139-9) and shot put (56-2).
“I love being under the lights,” he said. “It makes the atmosphere what it is.”

Kennedy’s discus throw, coming on his second attempt, is a personal best. It came after what he termed a “good week of practice,” and against the less-than-ideal weather conditions.

“The temperature got to me,” he admitted. “You just have to overcome it, dress warm.”

Zach Taylor, a senior member of the OJR boys’ squad, had his own reason to enjoy the invitational. He won the long jump with a personal-best leap of 21-1 1/2, a measured improvement over the 20-foot standard he reached as a sophomore.

“I love the fact I’ve made districts, and can work to get a state marker,” he said. “I had injuries my sophomore year. The season off was tough, but I developed and worked out more.” On the Owen J. girls’ side, Brooke Corson had a district-qualifying effort in the pole vault. The Roberts junior cleared 10 feet — the district qualifier mark is 9-foot-6 — on her first try, employing a “short run” to the box.

“We were supposed to jump at four,” she recalled, “but it got pushed back. It was rainy and wet, so I didn’t go with a full approach.”

Circumstances being what they are, and could be, Corson was happy to qualify for districts at this early stage in the 2021 season.

“With COVID-19, you never know what’s going to happen with the season,” she said. “I wanted to get it out of the way.” Boyertown’s Cameron Kratz races down the home stretch to win the boys’ 1600 meters.

The girls’ 1,600 pitted two of the PAC’s top distance runners in Claire Zubey (OJR) and Sienna Miller (Perkiomen Valley), both of whom were Top-10 finishers in the District 1-AAA cross country meet last November. The rematch started out close, but Zubey opened up the interval between herself and Miller on the way to the first-place finish in 5:08.12, well ahead of Miller’s 5:17.77.

“It was good to have her to run against,” Zubey, already a district qualifier in the event, said. “It’s a good start, but I know I can do more.” Miller had a later moment of glory, winning the 800. Having already qualified for districts in the 3,200, she is currently three seconds shy of doing so in the 800, and a second or two off doing it in the 1,600.

“I like the competition,” Miller said of the invitational format. “The whole team is making progress. We’re training hard and working together as a team.”

“The last time I ran, my strategy was to lead,” Kratz, who finished second to Roberts’ Matthew Kwiatkowski in the 3,200, said. “That didn’t work, so I stuck behind the leaders and kicked at the end. The last lap, I sprinted out with everything I had.”

The Spring-Ford boys had winners in all but two of the seven field events. Other first-place finishers, in addition to Kennedy and Hellauer, were Alex Teufel in the pole vault (12-0) and Zach Zollers in the javelin (136-4).

NOTES >> Other Liberty Division invitationals will be held at Owen J. Roberts April 24 and Perkiomen Valley May 1, It was noted Methacton will stage a “Last Chance” meet as an additional opportunity for district qualification. Methacton’s Shannon O’Brien clears the final hurdle as she wins the 300 hurdles at the Boyertown Invitational. (Austin Hertzog – MediaNews Group)