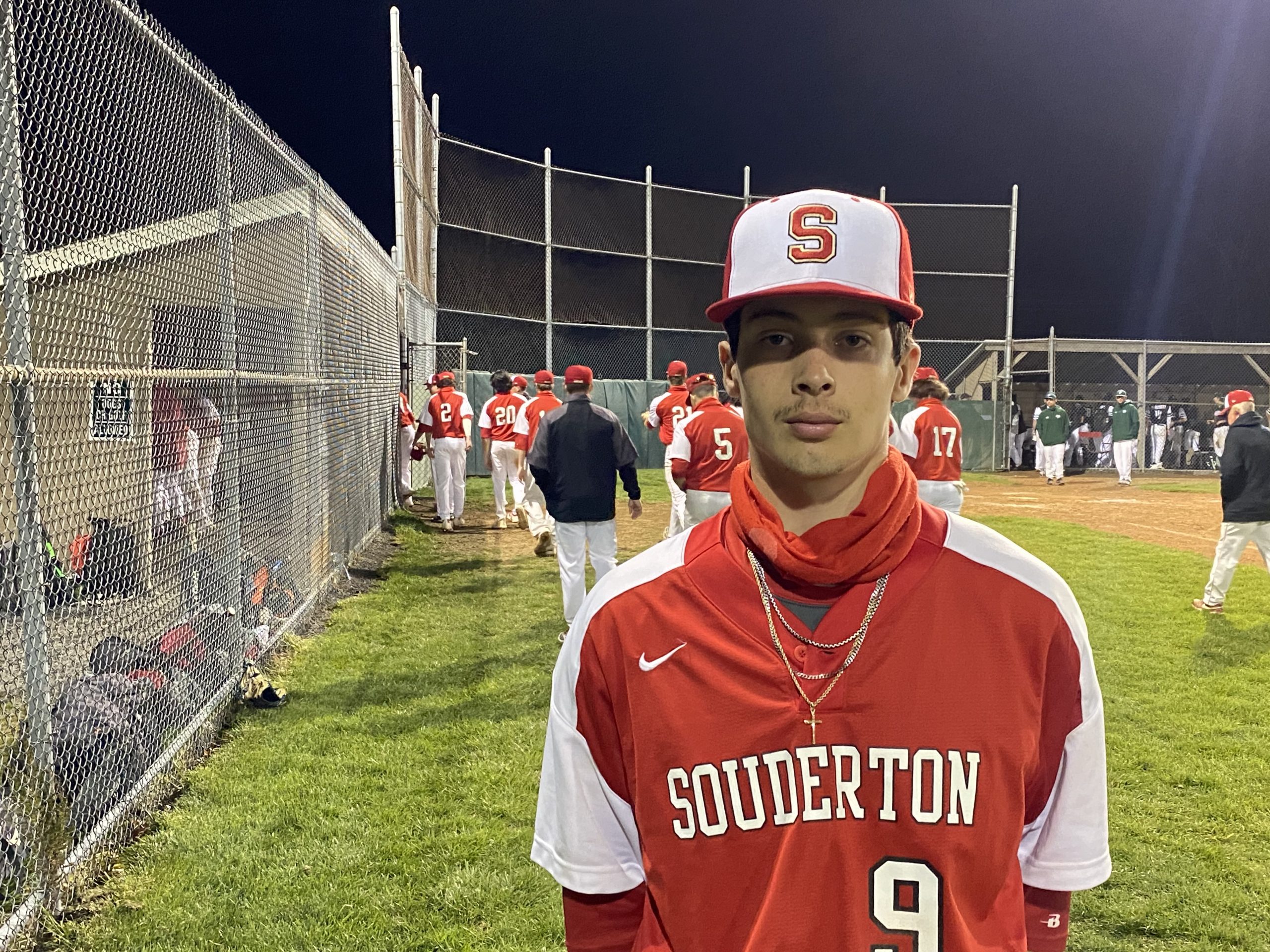 WEST ROCKHILL >> A grand slam by Pennridge’s Matt Atchley in the bottom of the second inning knocked the Souderton baseball down. Isaac Frye made sure it wasn’t out.

“I could tell everybody was down,” the Indians shortstop said. “We needed a leader that inning or the next inning, someone who was going to put the ball in play to score some runs.”

Frye did that on his next chance at the plate with a big hit of his own – a three-run home run in the top of the fourth to pull Souderton to within 4-3.

Three batters later, Alex Morales’ RBI single had Big Red even and in the fifth Frye put the visitors ahead for a good with a RBI sacrifice fly.

“I had a bad day yesterday, we all had a bad day, we didn’t play too good,” said Frye of a 7-5 loss to North Penn Tuesday. “I got all the mental blocks out and I was just on today. I felt like I could hit the ball today. I wasn’t just watching pitches, I was aggressive at the plate.”

Frye finished with four RBIs and two runs scored, Dante Bruno had a pair of runs scored and Justin Dicesare drove in two with a single in the seventh as the Indians’ offense picked up Crouthamel after the right-hander’s tough second inning.

“Honestly, I kind of just had to shake that one off a little bit just because I knew those kids could hit a little,” Crouthamel said. “But I knew our guys could just bounce back and once we got those runs I could just use that and bounce off of that.”

Other than the one frame, Crouthamel was dominant. He struck out 14 and allowed four hits – all in the second – walked three and hit one batter in his 6 1/3 innings on the mound , helping Souderton (3-2, 2-2 division) avoid a third straight loss.

“Honestly, the curveball was working most for me,” he said. “Once I got in front of them with two strikes, I was going with my curveball.”

After freshman Atchley’s grand slam, Bobby Croyle doubled on the next at-bat but was the Rams’ last hit of the night. Pennridge had four baserunners on in the final five innings on three walks and a hit batter.

The loss was the second straight for the Rams (2-3, 1-3), who fell 7-6 to Central Bucks West Tuesday despite leading 5-0 at the end after the second.

“We’re the kings of one big inning and that’s all we need but we tell them all the time, the approaches that we have to have, we have to score runs every inning,” Pennridge coach Craig Whitten said. “That’s just every team that we play is going to try to score every inning. We can’t be content with our first time through the lineup just getting the job done. “

“Well from what I’d heard, West is hot right now,” Frye said. “They’re hitting the ball so I feel like that we just need to stay on, we need to hit the strikes, don’t watch the curveball, just perform like we did tonight.”

“I thought DeHaven started well, he became predictable with his off-speed pitches, stuff that me and (assistant coach Tim) Taggart were talking to him about – mixing your looks up, mix your pitches up,” Whitten said. “Compared to last Wednesday against CB East, he had a hell of game compared to that cause at least he knew his adjustments.

Ashton McCloskey began the Rams’ half of the second by dropping a single into right field. Harry Haeflein hit a single to right while a Carson Wells walk loaded the bases with no outs.

Crouthamel struck out the next two batters but could not work out of the jam untouched – Atchley, the Rams’ No. 9, hitter, belting a shot over the right-field fence to clear the basepaths for a 4-0 Pennridge advantage.

“Freshman, we brought him up we weren’t quite sure, he played a little bit,” said Whitten of Atchley, who reached base on all three of his plate appearances “Got his first start against North Penn on Friday, he started yesterday against West and he started today. And he’s making stupid freshmen mistakes with his one error. But they made a mistake on him and he hit off the top of the (batting) cage.”

Souderton, however, pulled even with four in the fourth. Luke Pollock led off with singled up the middle then Jacob Horton walked to put two on for Frye, who connected on a three-run homer to left center to cut Big Red’s deficit to one.

Bruno reached due to an error on the next at-bat, stole second, went to third on a wild pitch then scored to make it 4-4 on Morales’ one-out RBI single to left.

Shanley Wall and Pollock started the top of the fifth with consecutive walks with both advancing on a wild pitch. With one out, Frye gave Souderton the lead for good with an RBI sac fly to center that brought home Wall.

“I feel like we were seeing the ball better,” Frye said. “We weren’t just watching strikes down the middle, we weren’t watching curveballs, we were swinging, attacking the ball.”

The Indians extended their lead to 6-4 in the sixth. With one out and the bases loaded, Wall dropped a RBI squeeze bunt single to score Dicesare.

Dicesare doubled Souderton’s lead in the top of the seventh, ripping a single to left to score both Frye and Bruno.

Pennridge drew consecutive one-out walks but Xander Giordani came in and struck out the next two batters to strand the runners at second and third, picking up the save to seal the Souderton victory.