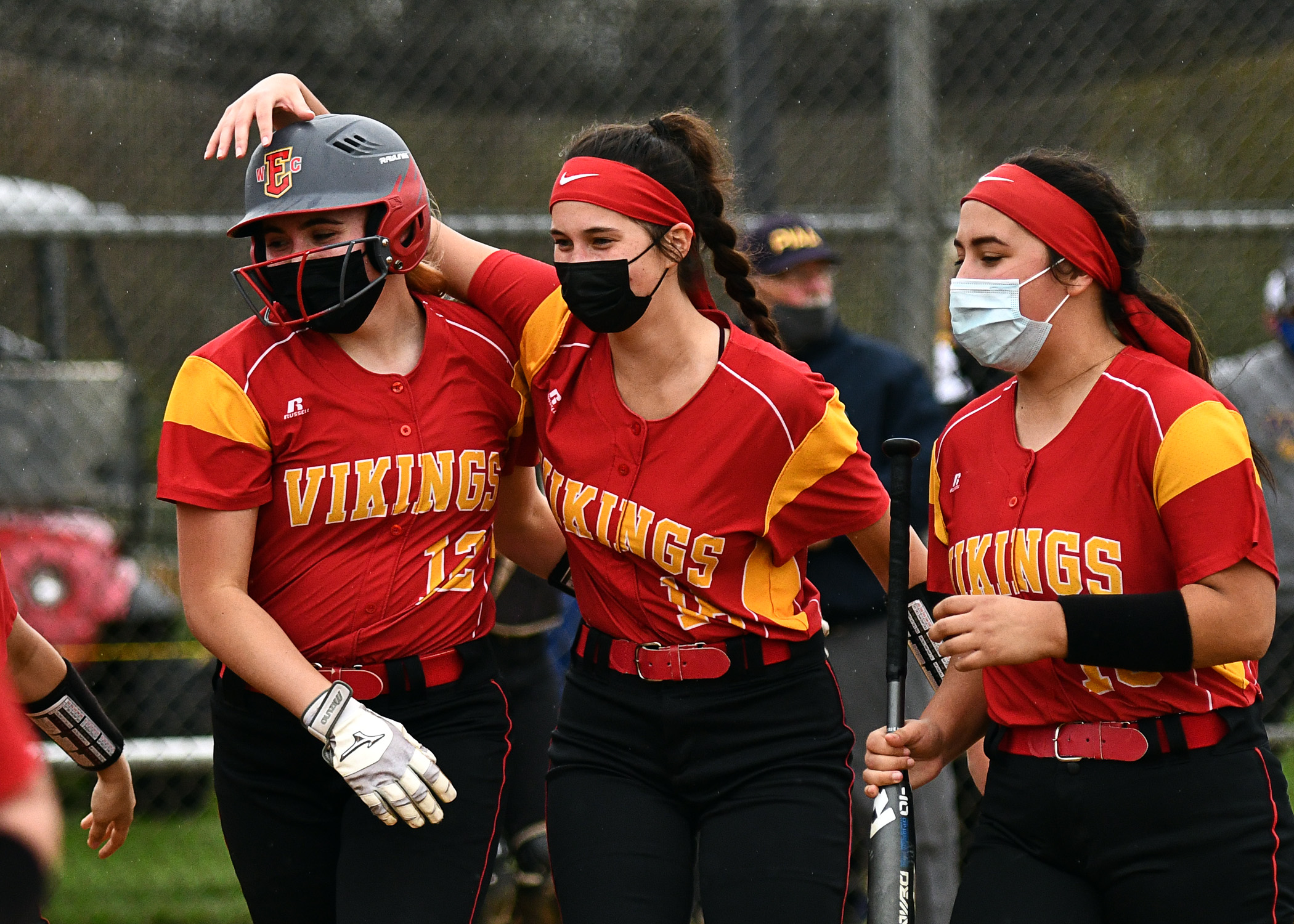 DOWNINGTOWN—For the past few seasons when softball has actually been played, Downingtown West and West Chester East have slugged it out for supremacy in the Ches-Mont National. This season looks to be no different. Wednesday afternoon, the two teams combined for 23 hits and battled each other run for run for six innings, entering the final stanza tied at seven apiece. But the Vikings (5-2, 3-1 National) pushed three runs across in their half of the seventh, and held on for the 10-7 win over the Whippets (4-1, 2-1 National).

“This was our seventh game of the year, and probably our seventh different batting order,” said Vikings coach Bobby Swier. “We’ve had different girls out all year, but today had just about everyone back and healthy. I think we’ve found a line-up that will get the job done.” The Vikings answered right back. Amanda Gomez got things going with a one out double, then moved up sixty feet on a single from Carey Werley. Mia Kulp brought them both home with a two-out double, then scored herself when Allison Hill singled up the middle.

Gomez had a pretty nice day of work, going 4 for 5 with two doubles and a couple RBI. She was kept busy in center field, too, credited with four putouts. Amanda Gomez Takes off for first. Gomez was 4 for 5 on the day (BILL RUDICK for MediaNews Group)

“That is exactly what you want out of your lead off,” said Swier. “But the girls got it done all up and down the order. Even the girls that came off the bench contributed. We’re very confident that we can count on anyone who takes the field.”

West tied it in the bottom of the inning with back-to-back doubles from Lizzie Kern and Anne Eliason, but once again, the Vikings had an answer.

With two outs and Rebecca Crump on first with a walk, Amanda Gomez singled down the right field line to knock her in. Up next strode Werley who picked up her second of three hits on the day. None was bigger than this one, though, a blast over the fence in deepest center for a two-run home-run and a 7-3 Viking lead. Carey Werley takes a cut and delivers a hit. Werley was 3 for 5 with a HR (BILL RUDICK for MediaNews Group)

“It was unbelievable,” said Werley. “I was just excited to be a part of that big rally we had and get the runs across. This was a really big win for us. Our energy was high from the start, and I am just happy to get the win over a team like West.”

The Whippets, all of a sudden, were down, but surely not out. All year so far, West has put up the runs. Down four, West put up a run in the fifth on singles from Lioumis and Kern, and then another three in the sixth, highlighted by a 2 RBI triple from Meghan Sinkus.

“We just didn’t seem focused on our game today—we had at least four errors,” said West coach Joey Germani. “But it’s a long season, and we’re still in good shape. It’s just one game, and we just have to put it behind us and focus on getting better every time out.” West Chester East put the game away in the top half of the seventh. Mia Kulp put the Vikings back on top, leading off the inning with a solo home run to right center. The Vikings added two more after Hill reached on an error, then singles from Alyssa Conlon and Abbey McCormick, and an RBI groundout from Crump.

“I try not to think too much when I go up to the plate, or I find myself getting in my own head too much and I won’t be able to hit,” said Kulp. “I was just looking to make contact and get on base, but I got the home run. There wasn’t much we could have done better today. We were all excited and high energy all day. This was huge to get this win over West. We finally played the way we all know we can play, and beat a very good team.”