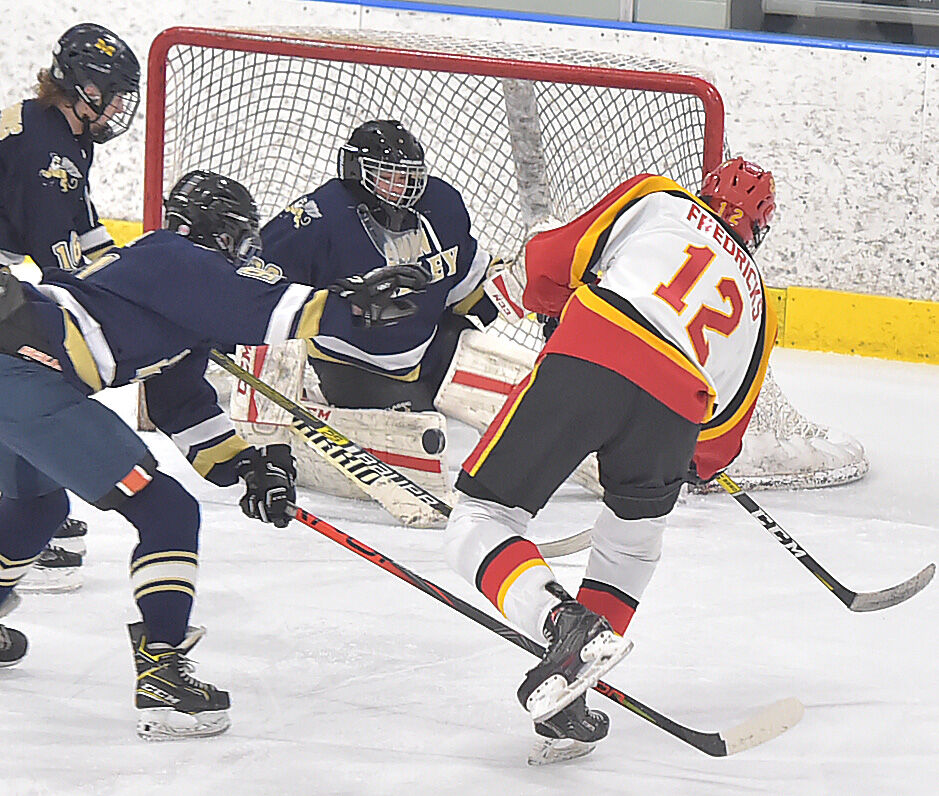 WEST GOSHEN — The last memory for Nate McGinnis as a high school hockey player won’t be of the scoreboard, or of stick taps, or the final horn.

Instead, the player who wears the C on his jersey for Sun Valley’s hockey team will have an indelible and literal image to remember: McGinnis and the Vanguards’ seven other seniors, arm and arm, for a final picture as high school teammates.

McGinnis’s finale, the No. 5 Vanguards mercy-ruled by top-seeded West Chester East, 11-1, in the Flyers Cup Class A semifinal, didn’t leave much to cherish. But the larger journey, of McGinnis and the Vanguards going from a JV team as a freshman to beating Springfield in overtime in the Flyers Cup quarters as seniors, that’s the takeaway. “It’s our first Flyers Cup win last round, before this,” McGinnis said. “It means more doing it with this group of guys. I basically treat them like brothers. I’ve been growing up with these kids since elementary school. My actual brother is on the team. It’s going to be sad not being on the ice with them ever again, but it was a good time while it lasted.”

When McGinnis says they have built the program from the ground up, they mean it. McGinnis and his classmates have done the recruiting, of new players and parents to coach, to make sure they could stick at varsity. For that to culminate in last week’s 4-3 victory against Springfield on Ian Finley’s OT goal is profound, regardless of what the semifinals brought.

The run ended against the unbeaten East powerhouse. The Vikings, who’ve outscored opponents by a 94-15 margin this season, poured it on late. They led 3-0 after one period, and while Sun Valley (10-4) cashed in its third power-play chance via Hayden McGinnis to briefly get within two, the Vikings pulled away from there.

That included four goals in 2:25 after the second-intermission to trigger the mercy rule and bring the game to a quick end.

“Obviously you want to come out strong,” East forward and offensive ringleader Greg Diamond said. “We came out strong, playing hard from the start, put a couple of goals on and get them scared.”

Diamond led the way with a hat trick and two helpers. He deked and deposited a backhander past Sun Valley goalie Will Newnom to make it 3-0, then skated through the entire team for most of the first 35 seconds of the third period to make it 8-1.

With Diamond shining on East’s top line and the second line with the brothers Cardarelli – two goals and an assist for Michael, a goal and two helpers for Joey – East was firing on many of its plentiful cylinders.

The game plan included East’s defensemen activating into the offensive zone at will. Henry Thornton had a goal and two assists, including the marker that ended the game. Gavin Kane scored on a seeing-eye shot through traffic, and Cam Greenawalt added two assists.

They needed that to get past Newnom, the freshman acquitting himself admirably in goal despite a 42-10 shot disadvantage. He produced a few stellar stops to keep his team in it briefly.

“It’s huge, especially him being a freshman and not having as much experience as other people,” Nate McGinnis said. “It’s amazing and I’m impressed by how good of a season he had.”

Newnom stoned Danny Tirendi point-blank on a rush in the first period. He went post-to-post to his right to kick out his pad for a sensational denial of a Thornton back-door play in the second, then trailed his glove hand to snare a Kane breakaway as the defenseman tried to toss a changeup his way.

The standout performance by the freshman, a goal from a sophomore in Hayden McGinnis (who pairs with another sophomore, Nate Benz, on the blueline) and other youthful contributions is why Nate McGinnis feels the future is so rosy.

“The future does look bright,” he said. “We’re losing a lot of seniors, but the sophomores are crazy. And my little brother, I don’t admit it much but I’m going to admit it now, he’s better than me. He’s amazing. He might look up to me, but I look up to him as much as he does to me.”

In the other Flyers Cup A semifinal:

W.C. Henderson 2, Strath Haven 1 >> There are games that a goalie can steal. Then there’s what Dylan Krick did for Henderson Tuesday.

Krick was outstanding, stopping the first 54 shots to come his way as No. 6 Henderson upset the second-seeded Panthers to set up an all-West Chester final.

If Krick got this with his stick, its one of the best saves I’ve ever seen pic.twitter.com/2x8klPHqja

Krick was spotless until 15 seconds remained in the game, when Walter Clauss beat him on a rush. But before that, he produced save after save, inundated at times with pressure in a game where his Warriors were outshot by a 55-19 margin. “I had a lot of shots but my defense did a great job keeping them limited and getting rebounds out,” Krick said. “And it was just amazing winning that game to go to the finals.”

That defense helped him kill six penalties. It led to more than a dozen blocked shots, the Warriors eating net-bound rubber. But Krick also supplied saves that were ordinary to extraordinary and every shade in between.

The best may have been in the second period, when Clauss snuck in on the back door for a rebound of a Nick Dignazio point drive. But Krick swung his stick to the left and got the knob in the way. He added a whopper of a denial on Josh Peabody, who scored all three of Haven’s goals in the quarter against Rustin for them to advance, in the third on a breakaway with 10 minutes to play.

“The one in the third period against Peabody on the breakaway, just because I know him as a friend, too,” Krick said. “It was a big save because then they would’ve been right in it.”

“We tried not to let us get to it,” Clauss said. “We know going in the goalie was phenomenal. Low shots on goal was our plan and get to the net hard. We stuck to our plan and when a goalie’s on like that, there’s not much you can do.”

Finally a breakthrough. Walter Clauss with shot no. 55.
14.4 left pic.twitter.com/TSTan1wbAO

Henderson got the first goal shorthanded, with Alex Holloway taking a Christopher Laurence stretch pass and tucking it away. Trey Jefferis got the second goal on a power-play breakaway, skating through the four Panthers on the ice and beating Kadin Matolek. Laurence again had the helper.

Matolek kept his team in it with 17 saves, including several show-stoppers. He stuffed Jefferis, then Tyler Krick with pad saves on a 2-on-1 break one after the other in the second period.

But it was the other Krick who had the final say.