Plymouth Whitemarsh shows mentality of opportunity in win over Abington 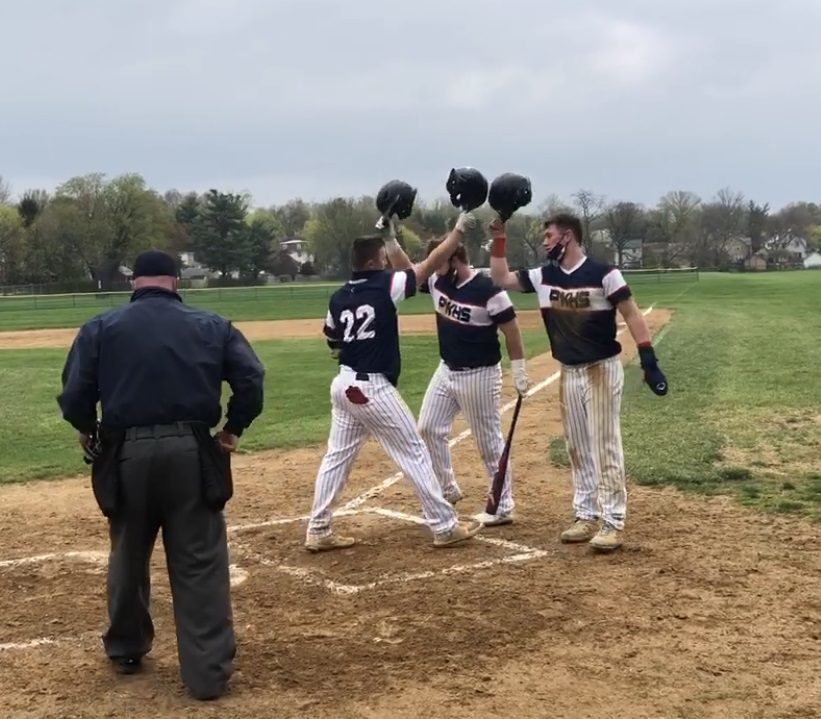 For many of the Colonials, this spring marks their one chance to be part of a varsity roster while for others; it’s a first opportunity to put themselves out there. Regardless of class standing, spot in the batting order or amount of experience, chances are at a premium and the PW players don’t want to waste them.

The Colonials certainly didn’t waste opportunity Wednesday, following a perfect outing from Tom Yanoshik and two home runs from Jesse Jaconski to a 10-0 win over Abington in five innings.

“You have to go out and think you’re going to be dominant,” Yanoshik said. “Be confident in the pitches you throw and what we work on in practice, it’s why we practice so you can go out and do the same thing.”

A senior who has been rock solid in the No. 2 starter role for PW (6-0, 4-0 SOL Liberty), Yanoshik is a prime example of the mentality coach Chris Manero has seen take root in his team. Yanoshik didn’t play for the Colonials as a sophomore, then had his junior year wiped away by the COVID-19 pandemic, so this season is all he gets for a high school career.

He’s far from the only one. With just three returning players owning any varsity experience, Manero said there was a wide berth of opportunity available and while some spots were cemented in quickly, there are still game-to-game variables for someone to seize. “There are a ton of places where not only are guys able to work in and out, but they can go in there to fill roles,” Manero said. “That’s one thing we’ve really seen, the ability to say ‘your job is to play small-ball today’ or ‘you’re in a spot to get a big hit when we need it,’ and they practice well together and really embrace those roles.”

Jaconski, the Colonials’ junior third baseman, was on the varsity roster as a freshman but has broken out in his first season as a full-time varsity starter. Hitting No. 2 in the PW lineup behind his older brother, senior shortstop and UNC recruit Joe, Jesse Jaconski has done plenty of damage for a Colonials offense finding its stride this week.

The younger Jaconski, who gave a verbal pledge to UNC back in December 2020, accounted for more than half his team’s offense on Wednesday. After striking out his first time up, Jesse adjusted to hit a single in the third inning and scored on Dom DiCiurcio’s two-run hit before showing off his power.

In the fourth inning, Jesse Jaconski belted a two-run home run to deep left-center that scored himself and his brother before one-upping his own output an inning later with a three-run shot to the same area that helped PW end the game early.

“Everyone has the mindset of a bulldog on our team and we want it to stay that way,” Jaconski said. “Everyone is hitting the ball, it starts with just putting the ball in play and we’re starting to find holes and put good swings on the ball to make things happen. It’s contagious right now.”

Abington (2-4, 2-2 SOL Liberty) couldn’t get anything going off the Colonials’ right-hander at the plate despite a couple hard-hit balls by Anthony Ehly and Henry Tyler to the outfield and a few balls in the dirt that the Jaconskis denied with good defensive plays.

Last Friday, the Colonials showed their resiliency in a nine-inning walk-off win over Hatboro-Horsham. While they didn’t need late inning heroics on the road Wednesday, they had a similar approach in maximizing their opportunities.

Manero several times called out to a player in the box to just extend their at-bat and PW battled at the plate to set up its big scoring plays. Luke Gartland wore a pitch with the bases loaded to get the first run in, Dom DiCiurcio put a ball in play that scored a pair of runs, Joe Jaconski slipped an RBI single just inside the first base line and Jesse Jaconski did his damage because the guys in front of him had gotten on base.

“With two outs, we can’t just give up on an inning,” Jesse Jaconski said. “You can still do a lot of damage with two outs, so you have to take advantage of every pitch you get. I feel like we’re doing a great job of that.”

Manero said Jesse Jaconski has the perfect temperament to hit behind his brother. Joe and Jesse are each other’s biggest supporters and if a team wants to pitch around Joe, the senior is going to try to steal a base and run hard to give his brother a chance to put runs on the board.

“I want to show what I can do, it just makes me want to hit the ball even more,” Jesse Jaconski said. “The first one, I just got it. I made an adjustment but knew I could do more and my next two at-bats really showed.”

PW hosts Wissahickon on Friday to wrap the first half of SOL Liberty play. The Colonials will play crossover games with the SOL Freedom then jump back to division play, putting them up against a packed schedule in a short amount of time.

With only so many games on the schedule and a roster of players all too well aware of how fast those can go from guaranteed to gone, the Colonials aren’t overlooking any opportunity. Yanoshik said they have to get better from every game

“We have to be grateful for what we have and mindful of what was taken away,” Yanoshik said. “We all love baseball, we come out here every day wanting to play the game we love and that got stripped from us last year. We’ve all said let’s make the most of the year that has been given to us.

“You only get four years in high school and having one taken away, it hurts, so it’s given us a lot more heart to play the game with.”