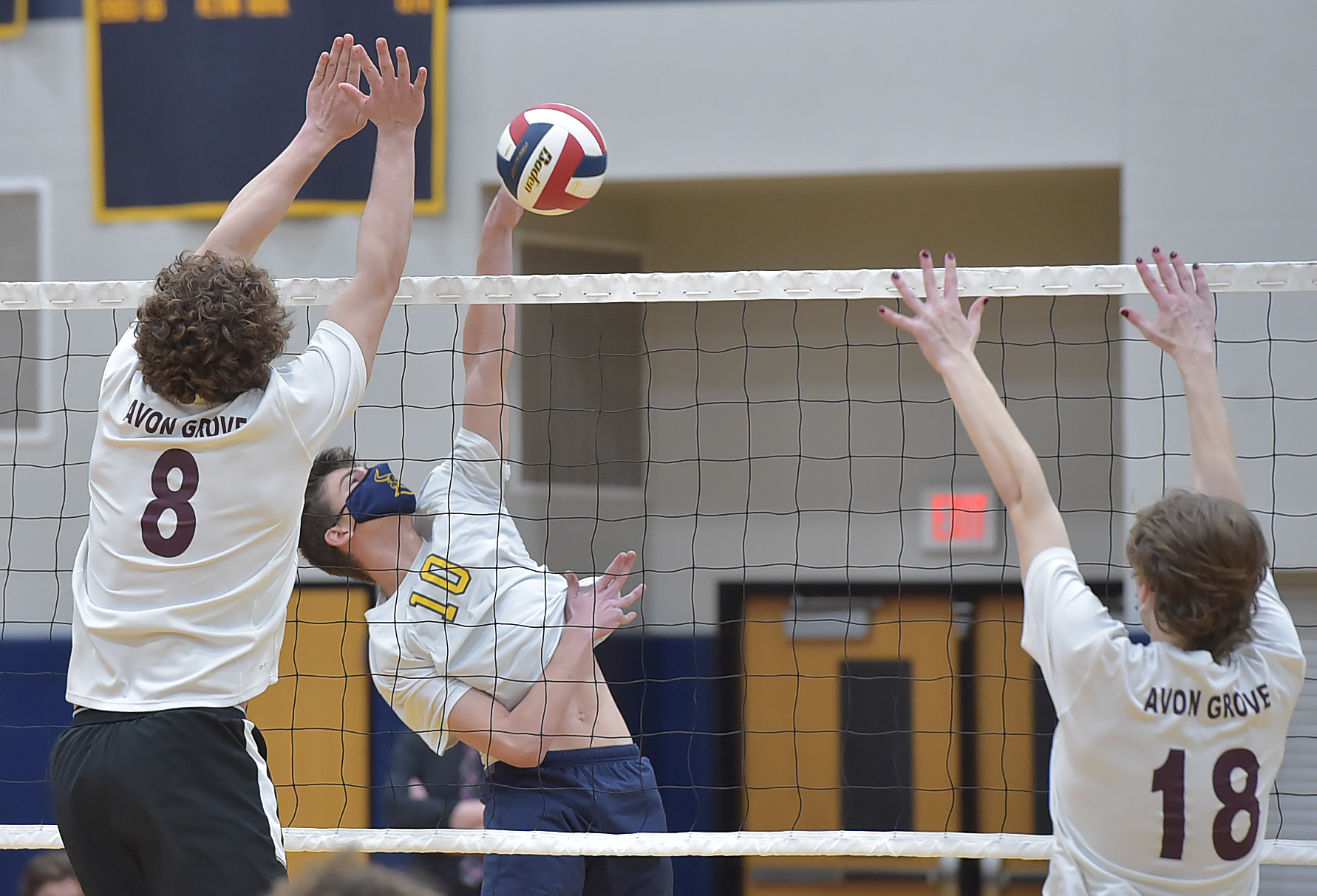 EAST MARLBOROUGH >> The only PIAA boys’ volleyball programs in Chester County staged one of three 2021 regular season contests on Wednesday. It almost never happens in high school athletics, but for Unionville and Avon Grove, it is out of necessity more than anything.

“We usually play twice a season, home and away, but this year with COVID, we are trying to keep our contacts limited so we are meeting three times,” explained Red Devils’ head coach Ashley Douglas.

A couple weeks after winning in three sets, the host Longhorns prevailed again, this time in more dominating fashion, 25-18, 25-17. The two will meet once more on April 26.

“We played Souderton on Monday, but I was more nervous for this one because (Avon Grove) is in our backyard,” acknowledged Unionville head coach Drew Moister. “It’s more challenging to play a team twice than the first time.” Unionville’s (12) William Carello and (13) Kessler Grabowsky are set to block a shot by Avon Grove’s Andrew Nutt in game two.

Right now the two play in the Independent League, and that probably won’t change unless more schools in the county start offering the sport.

“Wouldn’t that be nice? We do a lot of traveling because there are just two of us in the county,” Douglas said. “We would love for the sport to grow in this area. Kennett just started a club program, so we hope more schools will follow suit.”

It is the sixth season for the ’Horns as a PIAA program, and it has now been 10 years since Unionville started as a boys volleyball club.

“Every year we hear from West Chester that they may potentially have boys’ volleyball, and Garnet Valley has tried,” Moister said. “So I think it’s growing, but COVID didn’t help. We are slowly making progress, but I think in the next few years we’ll add a few more teams in this area so we won’t have all of these long bus rides.”

On Wednesday, the Longhorns used a similar recipe in each set to down Avon Grove. There were five ties early in both, but Unionville staged a mid-set rally to get a little separation, and then proceeded to close it out.

“It’s a local rivalry and it feels good to beat (Avon Grove) because they are the only other team on our home turf,” said senior hitter Kessler Grabowsky.

In the opener, the Devils took an early lead thanks to the serving of Alexis Cordova-Bernal and the net play of fellow senior Jake Culbertson. But the ’Horns got a kill and a service ace from Joey Canino which sparked a 10-3 run. Setter Kristian Tolbert then came up with three aces on his jump-serve to put Unionville in command 22-13. Grabowsky, Canino and Connor Crego then closed it out with three straight kills.

“I stress to the boys that it is a game of mistakes and we try to minimize those,” Moister said. “Once we got a little more comfortable and some momentum, we were able to string together some points.”

In the second, Canino had another ace and a kill to spur a 6-1 rally put the Longhorns in front for good. Down the stretch Chase Yeomans and Tolbert had key kills and Grabowsky ended it with a block.

“We were able to stay with (Unionville) until the midway point in each set and then we just fell behind,” Douglas said. “I think some of it is that we are getting fatigued because we have quite a few guys playing both JV and varsity due to some injuries and we had fewer players come out this year. So some of them did just play two sets right before playing two more.”

Canino and Grabowsky led the way with seven and five kills, respectively, and Tolbert paced the Longhorns with 23 assists.

“I think our team is getting better and starting to mesh,” Canino said.

“We had good energy and were able to persevere through and never get down on ourselves. We got the momentum in both sets and then rode the wave from there.”

Unionville also has a pair of student managers on the bench who know a thing or two about the game in Ashlyn Wiswall and Claire Nolan. They both played key roles for the Longhorns’ girls program, which won the Ches-Mont and District 1 titles and advanced all the way to the state title match in 2020.

“We have a great girls program,” Moister said. “And iron sharpens iron. With them coming in with their expertise, it definitely helps us.”