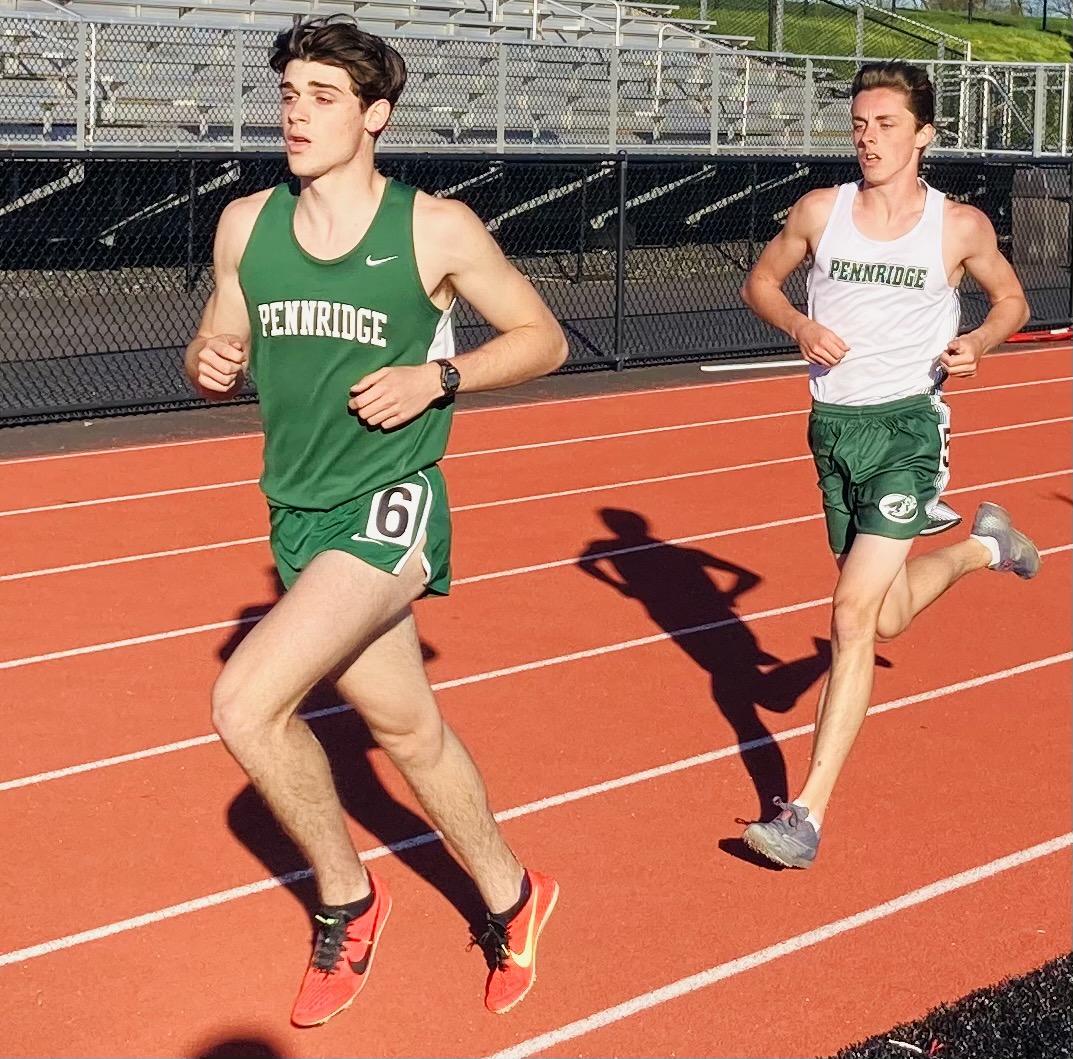 FRANCONIA >> Payton Mann’s goal for this season was to break 50 seconds in the 300-meter hurdles.

She accomplished that at the very first meet, in the pouring rain.

Things are quickly coming together for Mann, and the Pennridge girls as a whole. Evidence of that was provided on Tuesday afternoon, when the Rams combined forces to earn an impressive 104-46 dual-meet victory over rival Souderton.

“I’ve just been ready to do something with my life, not just sit inside,” Mann said of the return to the track this spring after the pandemic wiped out the 2020 spring season. “And I’m really enjoying it this year. I think we have a good team.”

The Pennridge boys also earned a 93-57 victory over rival Souderton, making it a sweep for the Rams on a sunny afternoon at Souderton Area High.

“It was a nice day weather-wise after (Monday) and everything perked up,” Rams coach Bob Hosier said. “We performed well. Everyone chips in and does their part.”

Said coach Bill Smith: “We got some pretty nice performances. We’re looking to improve. Our milers are all getting better. And they’re pushing each other. So I’m very happy with the progress right now.” Payton Mann won the 300 hurdles and led off the winning 4×400 relay for Pennridge in the win over Souderton on Tuesday, April 13, 2021. (Kev Hunter/MediaNews Group)

On Her Way >> Mann is finding her way.

“I actually felt good in the 300 hurles for once,” she said. “I had a new mindset this race and I think it worked out for me.”

Last year was Mann’s first time running the 300 hurdles. Headed to York College next year, she is seeing rapid improvement in the event.

“It just keeps going down, every time I run,” she said of her time. “I think last year, I spent so much time on the technicality of it, and this year, I think I’m just like, ‘run it.’

“Even if you stutter or your form is bad, just get over the hurdle. Even if you have to run into it. Just get to the finish line.”

No stranger to overcoming adversity, Mann suffered a broken arm competing in the 60-meter hurdles when she was in eighth grade.

“I think that was a nice character builder,” she said with a smile.

Mann raced in the 400 and 4×400 relay as a freshman at Pennridge but returned to the hurdles by her sophomore year.

She has her sights set on districts this spring.

“That was one of my pleasant surprises,” Smith said of Mann’s performance. “She’s working hard. And it’s nice to see a senior where it’s all starting to come together.”

Arianna Kouakou bolted to victories in the 100 and 200 dashes for the Rams and Ashley Gordon took care of both the 800 and 3,200. Sierra Kapusta threw furthest in both the shot put and discus for Pennridge.

Athena Peterson (long jump), Maddy McCarthy (triple jump) and Cecilia Ryan (javelin) were all winners out in the field for Big Red. Coming on Strong >> The Pennridge boys displayed plenty of balance.

“They get along real well and they help each other,” Hosier said.

Distance ace Diego Lera-Lozano helped lead the Rams in more ways than one, even pacing one of his friends, Tom McGann, in the 3,200 so he could hit a P.R.

Lera-Lozano raced to the victory.

“I just came off an injury so I’m starting to get everything back together,” he said. “I really wanna break 4:14 in the mile (and get the school record) – that’s my goal. We have a solid team, a very nice team.”

“We’re going to the CB West Relays. Last weekend, we were at the Coatesville Relays. That was an excellent meet, seeing people from District Three that we never usually see most of the year,” Hosier said. “So that was good. We look for good invitationals and just keep on plugging away.”

Big Numbers for Big Red >> The Souderton boys have about 70 kids this spring, welcoming some of the football players who are out for the team for the first time along with strong freshmen and sophomore classes to go along with all of the veterans.

“Pennridge is a really strong team and we knew that, but a lot of guys had pretty strong performances for us,” Big Red coach John Donahue said.

Locals are savoring the return to the track, especially on a sunny afternoon like Tuesday.

“Last year was kind of a lost year so it’s like having an entirely new team,” Donahue said. “It’s kind of fresh and exciting that way in that the coaches and the kids are happy to have a season. So that’s been a real positive.”

Souderton will be at the Upper Dublin Cardinal Invite Friday.