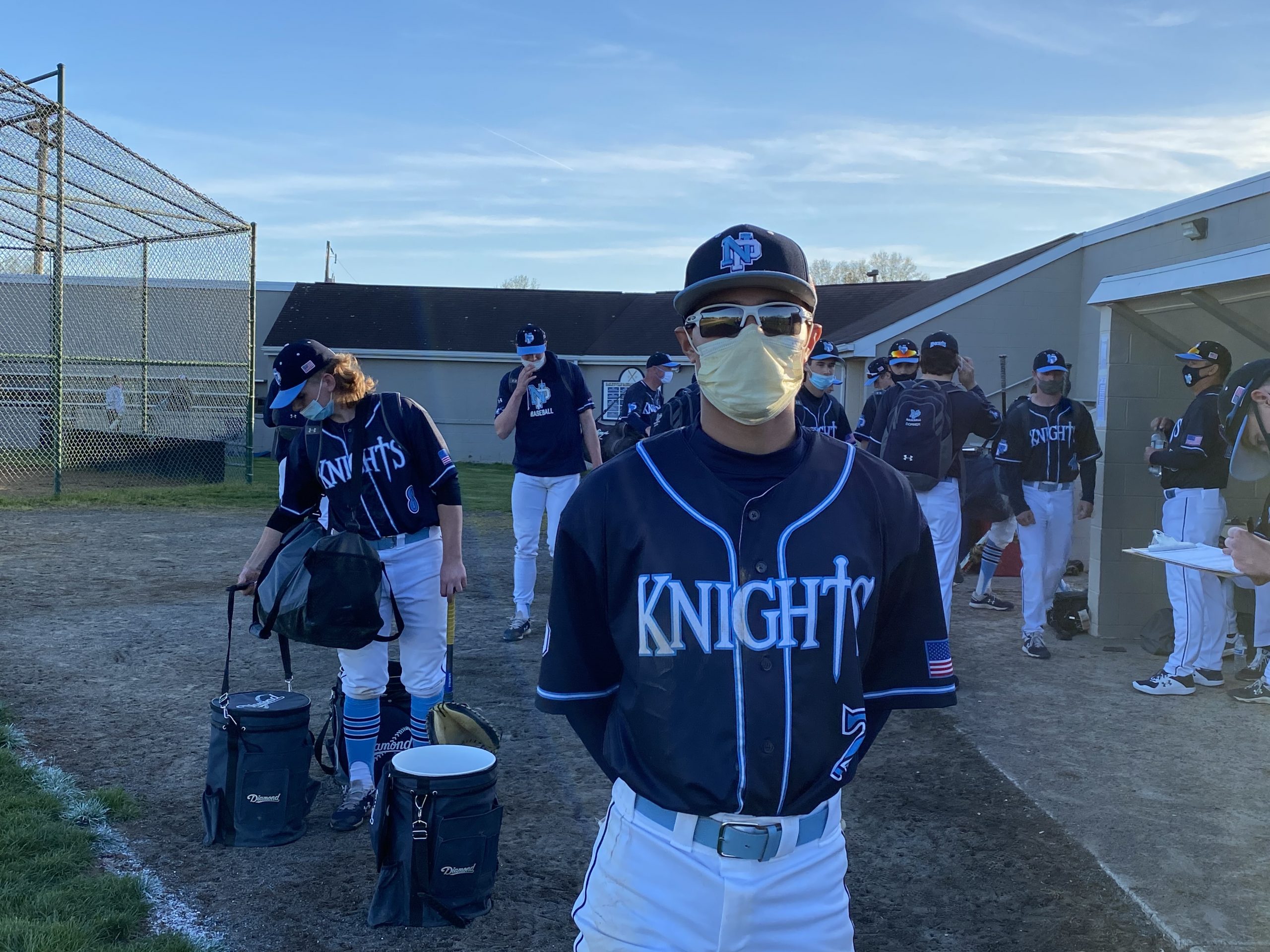 North Penn's Jeff Sabater reached on all four of his plate appearances and scored twice in the Knights' 7-5 win over Souderton on Tuesday, April 13, 2021. (Mike Cabrey/MediaNews Group)

LOWER SALFORD >>  It was not the typical offensive blueprint, but it more than worked for the North Penn baseball team in the top of the sixth inning Tuesday afternoon.

The Knights collected just one hit – a bunt single by Jeff Sabater – but took advantage of walks and hit batters to send 10 batters to the plate, scoring four runs in the process to break a 3-3 tie with host Souderton.

“Runs are runs,” North Penn right fielder Steve Corrado said. “And we just want to keep putting runners on base, battling at the plate. And even though it might be moving a little slow it’s always great, keep getting everyone up there.”

The four-spot in the frame was enough for the Knights to overcome some inconsistent play and hold off the Indians late to pick up a 7-5 SOL Colonial Division victory at Vic Alderfer Memorial Ball Park.

“We didn’t get a lot of hits but we had some really key execution in a couple of spots,” North Penn coach Kevin Manero said. “Put a couple really good bunts down and that just sort of changed the tide of an inning. That’s important for me to see us do that because there’s so many good pitchers in this conference that I know that there’s going to be a lot of games that we’re not going to have a lot of hits. So we have to be able to do the other things.”

The Knights (4-1, 2-1 division) had just one hit Tuesday that drove in a run – Corrado’s solo home run in the top of the first – left 12 runners on base and committed six errors. But North Penn also scored three runs on hit by pitches and added another two via walks as it erased an early 3-1 deficit to bounce back from its first loss.

“Proud of it,” Knights center fielder Jeff Sabater said. “If you ask Manero that’s the style of baseball we play – just executing and moving runners. And that’s what high school baseball is.”

Corrado was 2-for-4 with a home run, walk and three RBIs while Sabater, NP’s No. 9 hitter, reached bases on all four of plate appearances, going 1-for-1 with two walks, a hit by pitch, an RBI and two runs scored.

“Just any way to get on base,” Sabater said. “Like I said, I’m not going to hit the ball in the gap every time but singles and doubles and just small ball like that gets me on. And then just steal a base or two and that’s good.”

Souderton (2-2, 1-2) gave up a total of six walks, five hit batters and was also called twice for balks as it dropped its second straight.

“We’re beating ourselves right now,” Souderton coach Mike Childs said. “North Penn put guys on the field, they put guys in play and got guys on base. We didn’t capitalize with getting them out so we’ll see. We got some work to do.”

The Indians grabbed a 2-1 lead in the bottom of the first on back-to-back homers from Luke Pollock and Jacob Horton, plated another in the second but Big Red’s offense went quiet until getting a run in the bottom of the sixth to make it 7-4. A Horton two-out RBI single in the seventh got the Indians within two but a force out on a fielder’s choice the following at-bat sealed NP’s win.

“I said early in the game when it was 3-3, if we pull off this win it’s be a miracle just the way we’re playing,” Childs said. “We just did a lot of stupid mistakes and our pitching did not help us today, without a doubt. Even when we bring in a guy, our second pitcher, he comes in and walks two guys and scores two runs off of that.”

Jack Picozzi led off the top of the sixth with a walk. Quinn Marret reached after an error on his sacrifice bunt while Sabater’s bunt single loaded the bases with no outs. Evin Sullivan was hit by a pitch to put the Knights up 4-3 and ended the day for Souderton starting pitcher Horton. Corrado, however, was walked the next at-bat to give the visitors a two-run lead.

After a strikeout, RJ Agriss drew the Knights’ second bases-loaded walk to make it 6-3. The Indians got the second out on a strikeout but with the bases still packed Pat Breen was hit by a pitch for the Knights’ fourth run of the inning.

“Obviously there’s some teams out there that are playing real good ball right now, but I do think with lack of varsity experience and so much time away from Suburban One League baseball, you going to see some games early on where teams make more mistakes than maybe they normally would,” Manero said. “And the key is to find ways to win those games now and today we did.”

“Dylan, he had his best game of the year today and I think the most important thing was he got stronger as he went,” Manero said. “He started to get really good command of his secondary pitches and, yeah, we were down 3-1 but he kept it right there, he got us into the sixth inning which is real important, especially when you have three games in a week.”

Horton took the loss for the Indians. The righty, who also went 3-for-4 with a home run, two RBIs and a run scored at the plate, allowed seven runs –  three earned –  on four hits, struck out 10, walked and hit three batters.

“He’s a competitor, he stepped up, got the home run when we needed it but overall, pitching-wise, I think he’s not even at what he calls his top,” Childs said. “I’ve seen the kid throw and he’s tough when he’s on. We just need him to get on as we continue on.”

Both teams are on the road for SOL Colonial games Wednesday – North Penn is at Central Bucks South at 3:45 p.m. while Souderton takes on Pennridge 6:15 p.m. at James Memorial Park.

Corrado staked the Knights out to a quick 1-0 in the top of the first, connecting on a two-out solo homer to left center.

“That hit felt really good, but just won a battle out there,” Corrado said. “And get that fastball and drive it.”

Souderton answered with back-to-back longballs with two outs in its half of the first – Pollock first homering to left center to tie the game with Horton’s shot over the fence in left making it 2-1.

Hunter Weitzel and Dante Bruno started the bottom of the second with consecutive singles with an error on a Morales sac bunt allowing Weitzel to score for a 3-1 Big Red lead.

In the top of the third, Sabater led off with a walk, took second on a balk, went to third on a wild pitch and finally scored on Corrado’s RBI groundout.

North Penn loaded the bases with one out in the fourth on an Ethan Cohen single, Breen reach in on an error and an intentional walk to Picozzi. After a strikeout, Sabater was hit by a pitch to tie the game 3-3.

Down 7-3, Souderton scored a run in the bottom of the sixth as Isaac Frye came home after an error following a wild pitch. In the seventh, Pollock reached on a two-out error then scored on Horton’s RBI single.