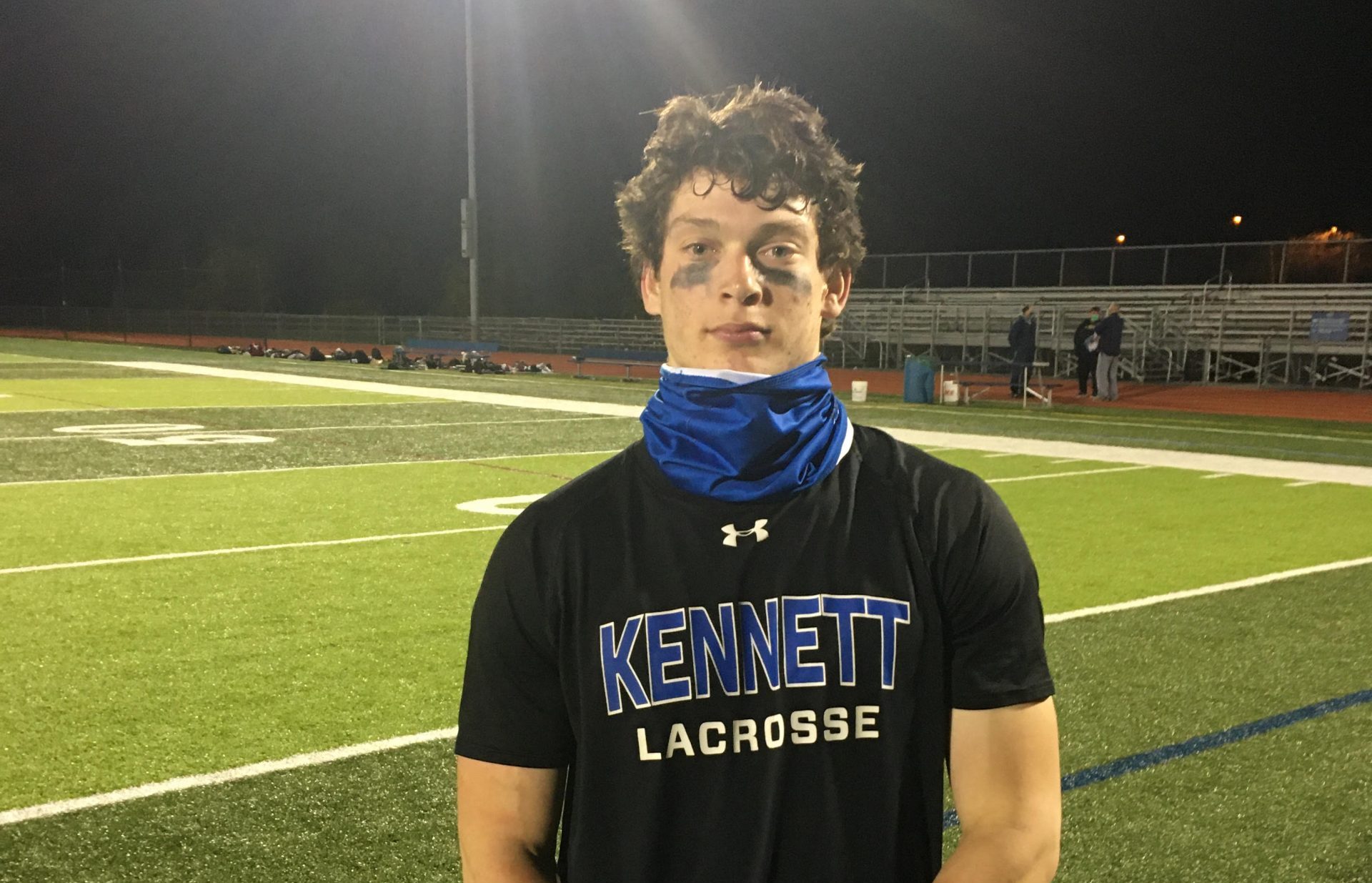 EAST MARLBOROUGH >> You could say it was a wake-up call. Or that it lit a fire under the Blue Demons.

Whatever you call it, it happened midway through the third period when the Kennett boys’ lacrosse squad found itself trailing, and proceeded to reel off 10 unanswered goals to close out a 12-3 road win over archrival Unionville in an early season battle between Ches-Mont unbeatens.

“It was a wake-up call,” acknowledged Demons’ senior Richie Hughson. “We knew we shouldn’t be down, and it kind of focused us up.”

For more than 36 minutes of action, the Longhorns and junior goaltender Nicholas Kotch kept the dangerous Kennett attack in check. And when Unionville scored the first two goals of the second half to go ahead 3-2, it looked like an upset in the making.

“This (rivalry) means more to our kids than just about anything else this season,” said Demons’ head coach Bob Alvord.

“It’s our cross-town rival and once we settled down, things started happening for us.”

Kennett improves to 2-0 in the league, and 3-0 overall. For shorthanded Unionville, the late collapse overshadowed an encouraging first half and drops the team’s mark to 1-1 (2-2 overall). Three starting offensive players missed the game for UHS due to COVID-19 protocols.

“It’s a game of momentum, and once (Kennett) made their run, we just didn’t have the gas left in the tank,” said Longhorns’ head coach Steve Holmes.

The comeback began with a great individual effort by senior Sam Forte that tied it at 3-all. And on the ensuing face off, Hughson won it, took it down the field and notched an unassisted tally that would wind up being the game-winner.

“This is a big rivalry game and, really, our first test this season, so it means everything,” said junior Jake Freeberry, who scored four goals and added two assists. “To come back like that and get on a big run is just a great feeling.”

The Blue Demons proceeded to scored three more goals by the end of the period – two by Freeberry and another by Forte – and all three were the result of crisp interior passing.

“We started doing what we’ve been preaching: sharing and moving the ball,” Alvord pointed out. “It’s real easy in a game like this – where the kids are over-hyped – to play selfishly. Once we started doing the right things, the ball started going in the net.”

Another key was in the faceoff circle, where Hughson won seven in a row, giving Kennett a big boost in possession time.

“Face offs were the difference,” Alvord said. “We started winning them in the second half and good things happen when you possess the ball.

“I remember saying as a staff that Richie (Hughson) was having an off-night and then he flipped the switch in the second half.”

Forte and teammate Zach Hulme each added two more goals each in the final period to conclude the 10-0 onslaught, turning a defensive battle into stress-free finish.

“Our offense can get clicking at times,” Freeberry said. “We have so many guys who can score on this team, and it’s really a luxury. Passes started getting though, we started finishing shots and really playing to our strengths.”

It was a completely different story in the first half. Kotch was very busy in the cage and kept the Longhorns in it. He faced a dozen shots on goal in the opening 30 minutes and stopped 10 of them. Only Freeberry’s unassisted goal in the first quarter, and a one-timer by Evan Hartmann late in the second period got past him.

“(Kotch) stood on his head, as he usually does,” Holmes said. “I think he is one of the best goalies in the area, not just in our league.

“We had a good defensive game plan and they played it well. But clearing is part of defense and that’s where we were more careless than we hoped to be in a big game like this.”

Unionville was outshot 27-10 for the game, but Haden Quillman and fellow senior Nicholas Farrell scored just 77 seconds apart early in the second half to make it 3-2. Farrell also scored in the first half and the Longhorns trailed 2-1 at the half.

“I thought we played into (Unionville’s) hands in the first half,” Alvord said.

“I would say the difference in the game was too many careless turnovers in our end. It just sort of added up,” Holmes added.

“When you have to play as much defense as we did and you turn it over, we just ran out of gas. We also didn’t produce offensively the way we are used to and the way we expected.”

Just like in every sport at every level, the Demons came away thrilled with a victory in the ‘Battle of Route 82.’

“In the past in just about all sports, Unionville’s kind of had our number. And now we are kind of coming back and have turned the tide a bit,” Hughson said.

“We’ve been playing sports with those (Unionville) guys since we were young,” Freeberry added. “We are just down the street from them, and so to be able to beat them is something that Kennett really takes pride in.”