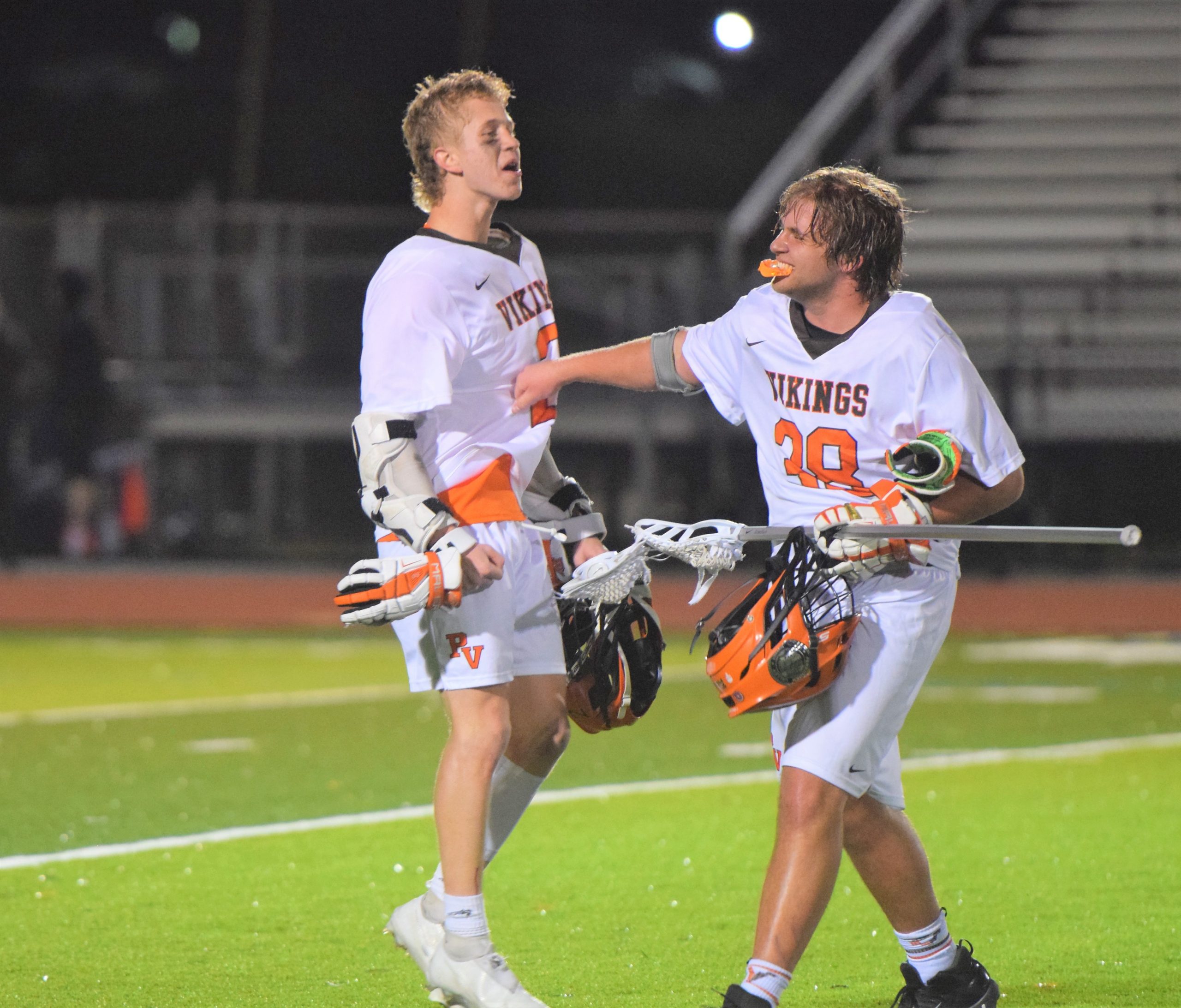 Friday night, the tears were different.

The emotion pouring from senior Jack Scaliti were tears of joy after Perkiomen Valley dramatically defeated Spring-Ford 8-7 thanks to junior Dane Hagen’s heroics on the game-winning goal with 38 seconds left that gave the Vikings their first win over their archrival since 2007.

Scaliti, who had a goal and an assist, carried a lot of weight, four years his own, 13 years for every past Viking.

“We work so hard for us. No one knows but us how hard we work for this,” said the tearful senior captain. “It feels so good.” Hagen, playing his first meaningful varsity minutes, had two goals and two assists. He broke the 7-7 deadlock on a quick restart, beating his man from the backside, faking a pass and ripping a sidearm shot while tracking away from goal for the deciding score.

“It was the end of the game, it was tied and I knew we needed a goal,” Hagen said. “It was a ‘send it’ mentality. I just thought, ‘Let’s go.’ I just had to prove myself right then and there.”

“We put in countless hours in the offseason, no coaches, when stuff was hard we were practicing, 13-degree weather, just the boys constantly. We’ve grinded. Everything we’ve done to lead up to this moment – we haven’t beaten them in 13 years – it’s an amazing feeling.”

It was Spring-Ford’s first Pioneer Athletic Conference loss since April 3, 2013. In the years since, the Rams have won nine straight PAC championships, including the past two in 2018 and 2019 with finals wins over Perk Valley. The pursuit of a 10th straight took a dent Friday in a pandemic-altered season where league regular-season record will determine the PAC title.

Other scoring for PV came from Matt Farrington (one goal, one assist), Harrison Schlachta (goal), Ryan Poston (goal) and Sam Nice (goal, assist, 5 groundballs) while sophomores Noah Delo and Colin Delo came up big on the faceoff, winning 11 of 16.

Spring-Ford got two goals apiece from Justin Wixted (one assist), Aaron Judge and Nick Teets, the Rams’ only returning contributor from the 2019 season. Christian Marchini also scored and Chris Quigley had an assist.

Perk Valley has the PAC’s most returning varsity experience after going really young in 2019 and losing last year to the cancelled season. That familiarity certainly didn’t hurt in 2021’s high-profile season opener.

“I’m not gonna lie, I was nervous before this game,” Scaliti said. “But it was a lot worse my sophomore year because I had never done it before.”

“As soon as the schedule came out and this was the first game on the schedule, we were like, ‘Let’s go.’” It was an unkind draw of a first game to whichever came out on the losing side.

The Rams’ emergence as the PAC’s gold standard has been built around upperclassmen foundations who were groomed in earlier years, a cycle that was broken by 2020’s shutdown.

“Everybody went through it,” said S-F coach Kevin Donnelly. “We really have a traditional and way of doing things and how the next guy is always up and have built that culture in everything we do and that was lost. That was big.

“We have the tools to take care of business, we just have to keep putting them in place.” PV head coach Bryan Churchey has been chasing Spring-Ford since his time as a Viking player. Churchey, who was a part of the previous PV win in 2007, had his high school career ended on Spring-Ford’s turf and has endured eight years of losses to the Rams as head coach.

“I have a ton of respect for Kevin,” Churchey said. “He has created a legacy and a gold standard here in the PAC. A lot of other leagues respect us just because of him and his program. We want to be at that same level.”

It looked like the same old story in the first half that saw Spring-Ford lead 5-3, the game settling after a poor first quarter filled with turnovers and penalties.

The game swung in PV’s direction in a 3-0 third quarter that was marked by faceoff dominance and poised possessions, as well as a few key saves by Jacob Klosinski (8 saves) that turned over the Rams’ lead quickly. After 13 years of built up losses to the Rams, it took Hagen to ensure things were different this time for PV.

“We talked this week about having an ‘alpha mentality’, being able to beat your 1-on-1, having the confidence, the aggression, the winning mentality every time you have the ball in your stick,” Churchey said. “I told them, if you see it and think you can do it, be an alpha. And Dane was alpha and that’s what we really like to see.”

Perk Valley celebrated like it won a championship Friday night, understandable considering the history, but it will be reminded quickly that one win isn’t the ultimate goal.

“This is an important win, a milestone win,” Churchey said, “but we’re focused on each round and treating each PAC opponent like a new playoff round. This was only round one.”