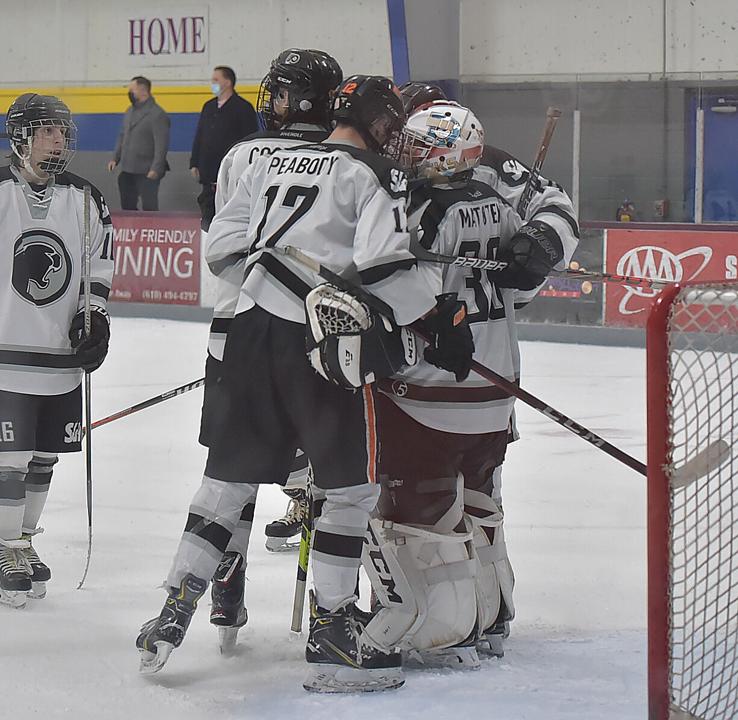 Strath Haven players including Josh Peabody (12) embrace goalie Kadin Matotek after they held on to defeat Rustin, 3-2, in the Flyers Cup Class A quarterfinals. Peabody had all three goals. (Pete Bannan/MediaNews Group)

Josh Peabody knew the surge from Rustin would come. So the earlier he and his Strath Haven teammates got to work offensively, the better. Peabody recorded a hat trick in the first two periods, then second-seeded Haven held on late in a 3-2 win over No. 10 seed Rustin in the quarterfinals of the Flyers Cup Class A.

“Rustin’s a pretty good team,” Peabody said. “I feel like they’re pretty solid all around so we needed to get the first one and probably the second one. It was very important to get that strong start.”

Peabody broke a scoreless deadlock early in the second period, firing a shot off the faceoff for a power-play goal. With time running out in the second, the Haven forward capitalized on a 2-on-1 breakaway and lit the lamp to make it 2-0, Christian Thack with the primary helper and Sean Spanier executing the expert stretch pass form the defensive zone.

Peabody wasn’t done. Early in the third period, he stuffed home a rebound in front of the net to give the Panthers a 3-0 lead.

Kadin Matotek made the goals stand up. He recorded 16 saves, including a pair in the final minute, to keep the lead.

Kevin Hudak opened the scoring with 8:30 to play, and Jason Rhein added a goal to make it interesting. But the Panthers held firm to advance to take on West Chester Henderson, the six seed a 5-1 winner over Wissahickon.

“I told everybody on the bench to stay composed and keep playing our game,” Peabody said. “We had a 16-minute period, we knew we were up 3-0, knew they were going to come at us. I felt like we handled it well, held them to two and got the W, and that’s all that matters.”

Also in Class A:

The Vanguards led 3-1 after two periods. Nate Benz started the scoring, and Mike Miles made it 2-1 after one. Nate McGinnis scored on the power pay in the final minute of the second period.

But Springfield rallied. Noah Huntley had scored from the point in the first period. He then set up Dominic Romolini’s tally with a rush from the blue line in the third. Zach Crain also scored.

But Finley had the final say, finishing off a rush in overtime and booking a date with No. 1 West Chester East, which downed No. 8 Penncrest, 5-0.

Haverford 7, Central Bucks South 2 >> Jacob Orazi tallied a second-period hat trick as the third-seeded Fords scored the first four goals in a comfortable win. Their reward is No. 10 seed Pennridge, which upended No. 2 Pennsbury, 9-6, in the semifinals.