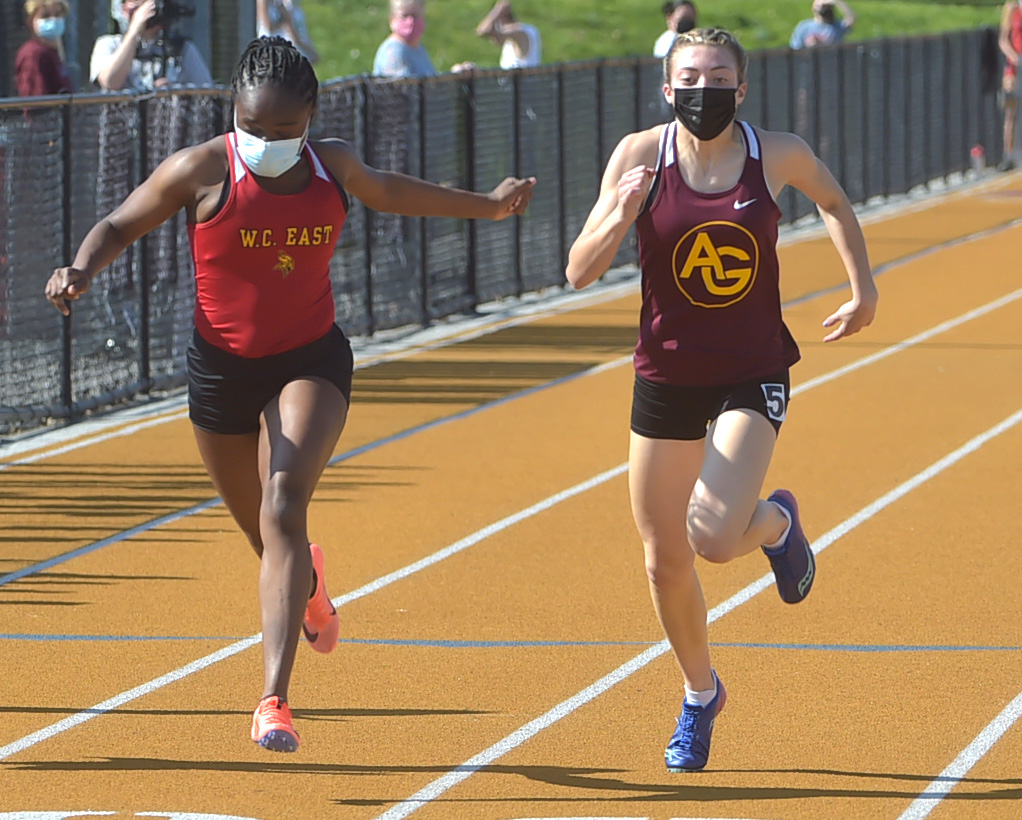 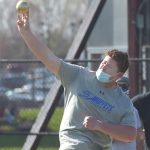 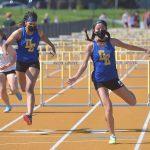 Downingtown West’s Rylee Ericson, Rylee, right edges teammate Gionvanna Jennings-Scott in a time of 17.03 to 17.46 in the 100 hurdles. 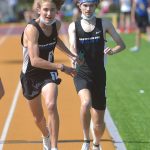 TheAiden Barnhill takes the baton from Holden Betz for the final handoff of the Downingtown West 4×800 as they won in a time of 7:58.94. THe other legs were run by Rymer and Conzelmann. (no first names in results) 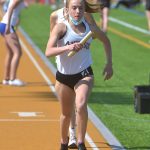 West Chester Henderson’s Liesl Schrerrer ran the anchor leg to victory in the 4×800 relay with a time of 2:27.oo and an overall time for the team of 9:54.33. Her teammates were unlisted in the results. 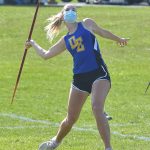 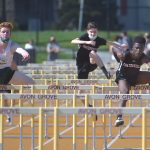 Bishop Shanahan’s Noel Doherty, left took first in the 11o hurdles in 15.73 while Coatesville’s Amiel Pouncy was second in 15.94. 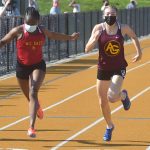 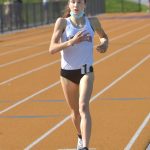 West Chester Henderson’s Jenna Mulhern was alone at the finish placing first in the 1600 meter in a time of 4:54.99 at the Ches-Mont Super meet Wednesday at Avon Grove High School.

WEST GROVE >> The Ches-Mont Super National Meet, held Wednesday afternoon at Avon Grove High School, featured a flock of track & field athletes who were happy to be competing again after the 2020 season was cancelled due to the COVID-19 pandemic.

West Chester Henderson’s Jenna Mulhern had reason to smile, earning a convincing win in the girls 1600 meter run. She clocked 4:54.99, well ahead of the second-place finisher (5:25.54).

“I’m pretty happy with my time, for [my] first track meet of the season,” said a smiling Mulhern, who was the Daily Local News’ Girls Cross Country Runner of the Year for each of the past three years. “I’m glad to be back, running track.”

Another grateful athlete was Bishop Shanahan senior Caleb Puz, who finished first in the boys pole vault (9’6”). During his junior year, Puz not only endured the COVID pandemic but suffered several ankle injuries as well.

“It’s great to be back,” noted Puz, whose older brother Andrew competes at pole vault for West Chester University.

Downingtown West also had reason to be happy, as the Whippets finished in first place in six of the 20 total events Wednesday (10 for boys, 10 for girls).

“It was just good to see all the kids compete again,” said Whippets girls track coach Tom DiSante. “They just continue to work hard and try to get better.”

What follows are highlights of each participating team Wednesday:

The Whippets finished first in the boys 4×800 relay (7:58.94), with a quartet of Aiden Barnhill, Holden Betz, Declan Rymer and JJ Conzelmann.

Al Saggese finished first in boys shot put with a heave of 41’11”.

The Whippets were first in the girls 4×100 relay (48.93) with a quartet of Lauren DiOttavio, Maya Tucker, Ryleigh Hearn (a last-minute replacement) and Jada Alston.

“We tried to stay positive and put it together,” said Alston, who anchored the girls 4×100. “We’ve been practicing individually but it was important that we put it together.”

“The girls 4×100 really rallied around Ryleigh, who was a last minute replacement,” said DiSante. “They worked on their handoffs on the fly and did well. It was a great team effort. Assistant coach Tracy Robinson was a big part of getting their handoffs precise today.”

DiSante said, “Coach Kline has been doing an incredible job with all the throwers and Maureen is off to a great start in all her throwing events.”

DiSante said, “Maya has been focusing on long jump in addition to her sprint events this year and has been seeing much improvement. Coach Ferron has been a huge factor with her steps and approach.”

Carolyn Tarpley finished second in the girls 1600 meter run with a clocking of 5:25.54.

“Carolyn is off to a great start this season and had a solid race today,” said DiSante. “Coach Burns’ reputation goes without saying and the boys and girls 4×800 relays and 1600m runners had strong performances today.”

The host Red Devils, whose seniors were introduced at the meet Wednesday, had a number of fine performances on their home field.

Avon Grove senior Kaylin Cousin finished first in the girls 400 meter run with a PR of 59.54.

Avinabo Poddar finished first in the boys long jump with a mark of 20’2”.

Red Devil senior Molly O’Connor, who will be continuing her track career next fall at College of the Holy Cross, finished second in the girls 100 meter run with a time of 12.40.

Two of the Red Devils’ 4 x 100 relays ran some of the fastest times in the state. The girls quartet of Payton Smith, Molly O’Connor, Kaylin Cousin and Eden Veenema placed second with a time of 49.65, and the boys foursome of Avi Poddar, Connor Ruark, Dan Kozel and Connor Carroll finished third with a clocking of 43.06.

Raider junior Lebron Bessick, competing in his first boys 100 meter run this spring for the Raiders, finished first with a PR of 10.92, while two Coatesville freshmen finished in the top 10 – Amir Haskett (11.44) and Donte London (11.51).

The Cougars captured the two top spots in the girls 100 hurdles, with Rylee Ericson (17.03) first and Gionvanna Jennings-Scott second (17.46).

Rachel Wertz finished first in the girls javelin with a throw of 98’1”.

Gionvanna Jennings-Scott was first in the girls high jump with a leap of 5’1”.

The Warriors finished first in the girls 4×800 relay (9:54.33) with a quartet of Gabby Caronia, Jenna Mulhern, Weronica Ziemniak and Liesl Scherrer.

Logan Krapf finished first in the boys javelin with a throw of 140’5”.

Alex Munro was second in boys pole vault with a mark of 9’0”.

Chinonye Moneme finished first in the girls 100 meter run, posting a time of 12.34.