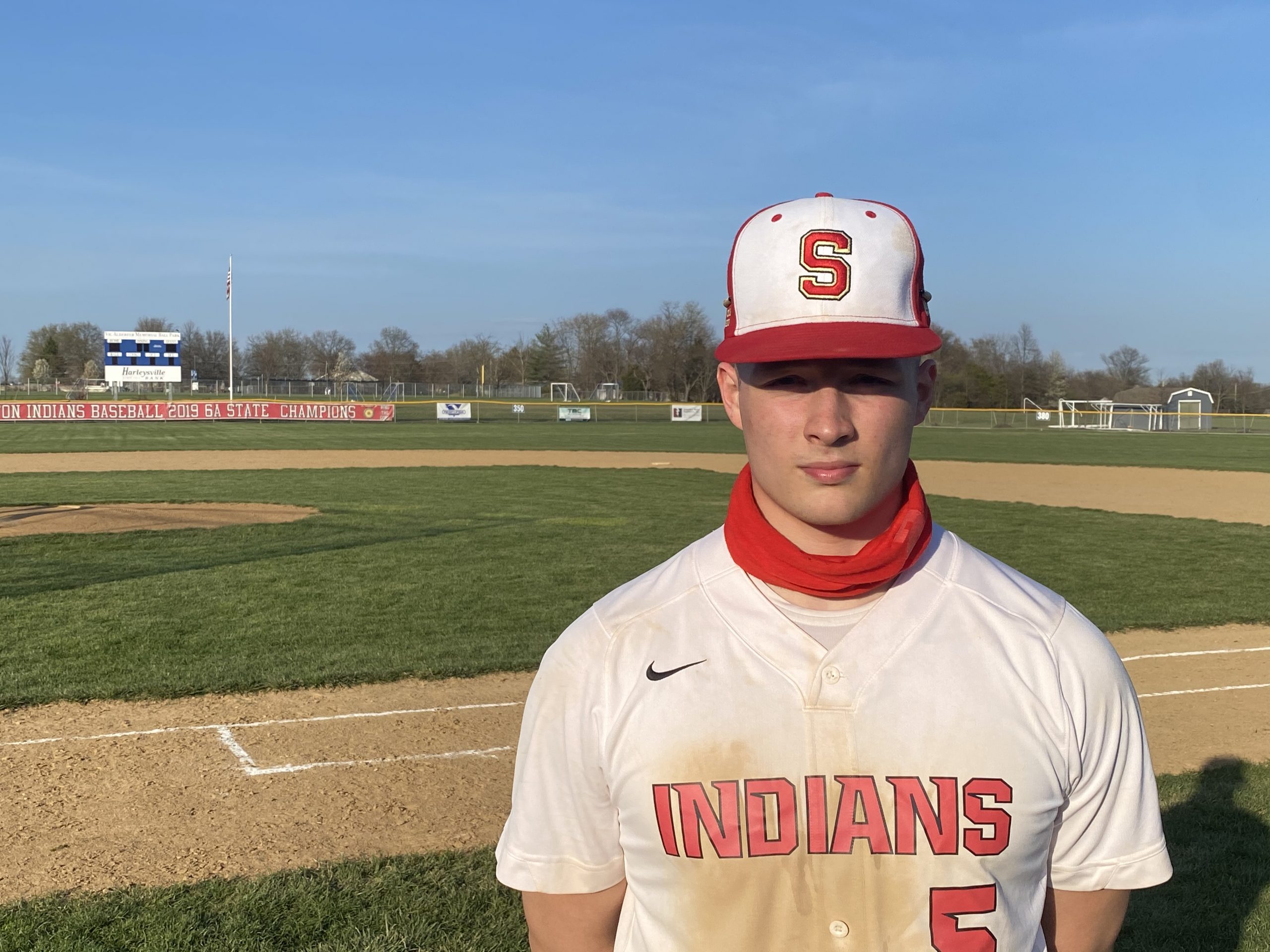 LOWER SALFORD >> Playing just its second game of the season Wednesday afternoon, the Souderton baseball team is still in the process of figuring things out on offense.

The Indians, however, showed they are capable of putting together a big inning.

Already leading Central Bucks South 4-0 in the SOL Colonial Division opener for both sides, Souderton blew open the contest by scoring seven runs as they batted around in the bottom of the fourth, pulling away to earn an 11-1 five-inning win over the visiting Titans at Vic Alderfer Memorial Ball Park.

“I wouldn’t say it was an outstanding hitting day but at lot better than honestly what we’ve been,” Indians coach Mike Childs said. “We had a couple early looks in practice and we made some adjustments in practice and today we felt more confident at the plate even though we saw little bit of signs of being early. But it’s early, so it’s nothing to stress about, nothing to fret about.”

Souderton (2-0, 1-0 division) finished with only four hits but drew eight walks and took advantage of a few South miscues – plating runs on two balks and a wild pitch to build its early lead. In the fourth, Big Red sent a total of 13 batters to the plate – the first 10 reaching base.

“We didn’t much have a preseason,” Souderton’s Jacob Horton said. “We always go to Aberdeen (Maryland) every year then we didn’t get to go to there so being able to only play like one or two games before actual season starts is really challenging and you never really know until the games start counting. So, I think we did really good today and I’m very proud of my team, what we did.”

Horton scored a pair of runs and also pitched all five innings to earn the win, the right-hander allowing an earned run on two hits, walked four and struck out eight.

“It was a little frustrating, I didn’t get my form all the way where I needed to be today,” he said. “I think that I can be a lot better and more efficient and the curveball needs to come.”

After Souderton took a 11-0 lead, CB South (1-1, 0-1) scored its lone run in the top of the fifth when Carter Hallgren drew a one-out walk with the bases loaded. But Horton prevented the Titans from extending the contest by striking out the next two batters.

“He got out of jams,” said Childs of Horton. “He’s up a little bit in the zone and he’s working on bringing it back down again. But the mentality going from a No. 2 pitcher to a No. 1 pitcher is a different mentality. Now you’re the best and you got to work. And he knows it.

“He’s one of the most competitive kids on this team and he knows what he got to do and he’s the leader on the team, he’s one of our captains and he knows he’s got to step up and play big in big situations.”

The Indians opened the bottom of the fourth with consecutive walks by Dante Bruno and Will McCausland with Matt Benner getting hit by a pitch to load the bases with no outs. Shanley Wall followed by collecting’s Souderton second hit – connecting on a single to left center field to bring home both Bruno and McCausland for a 6-0 lead.

“My at-bat I saw two fastballs that were kind of questionable so I had to try to stay back, put a barrel on it and just try to do my job in the situation,” Wall said.

After Horton walked to load the bases again, Luke Pollock was hit by a pitch to make it 7-0. The next at-bat, Wall scored due to an error after an Isaac Frye fielder’s choice down the third base line.

Hunter Weitzel’s big-hop single up the middle plated both Horton and Pollock for a double-digit lead. An Alex Morales RBI single through the right side of the infield put the Indians up 11.

Bruno added a third single in a row for 10 straight Souderton batters to reach base before the next three were retired to end the inning.

“We definitely had some timely hitting on top of the mistakes that they gave us. It worked out in our favor today,” Childs said. “And we talk about at the end here don’t ever be satisfied, don’t sit there because we picked up where we left off in 2019 or whatever it was, we still got to be ready to play every game.”

Souderton, still the defending PIAA Class 6A champ with the 2020 season not held due to the COVID-19 pandemic, stays in SOL Colonial play Friday when it visits Central Bucks East at 3:45 p.m. CB South hosts a division matchup with Central Bucks West 6 p.m. Friday.

Titans starting pitcher Robby Porco took the loss, the righty giving up four runs – all earned – on one hit, walked five and struck out eight.

Benner led off the bottom of the first with a walk, stole second with an error on the play allowing him to go to third. Benner then came home on a two-out balk. Pollock kept the inning going with a walk then scored from first when Frye hit a ball over the right fielder for an RBI double.

In the top of the second, South had two on with one out after a Jimmy Yang single and Dakota Beck’s walk. An error on a pickoff attempt advanced the runners to second and third but Horton worked out of the jam with consecutive strikeouts.

Souderton doubled its advantage in the third. Wall and Horton began the bottom of the inning with back-to-back walks. Both advanced on a wild pitch while a balk allowed Wall to score from third.

“If they give it to us, we’re just going to keep taking it,” Wall said.

A wild pitch allowed Horton to score, pushing the home side lead to 4-0.