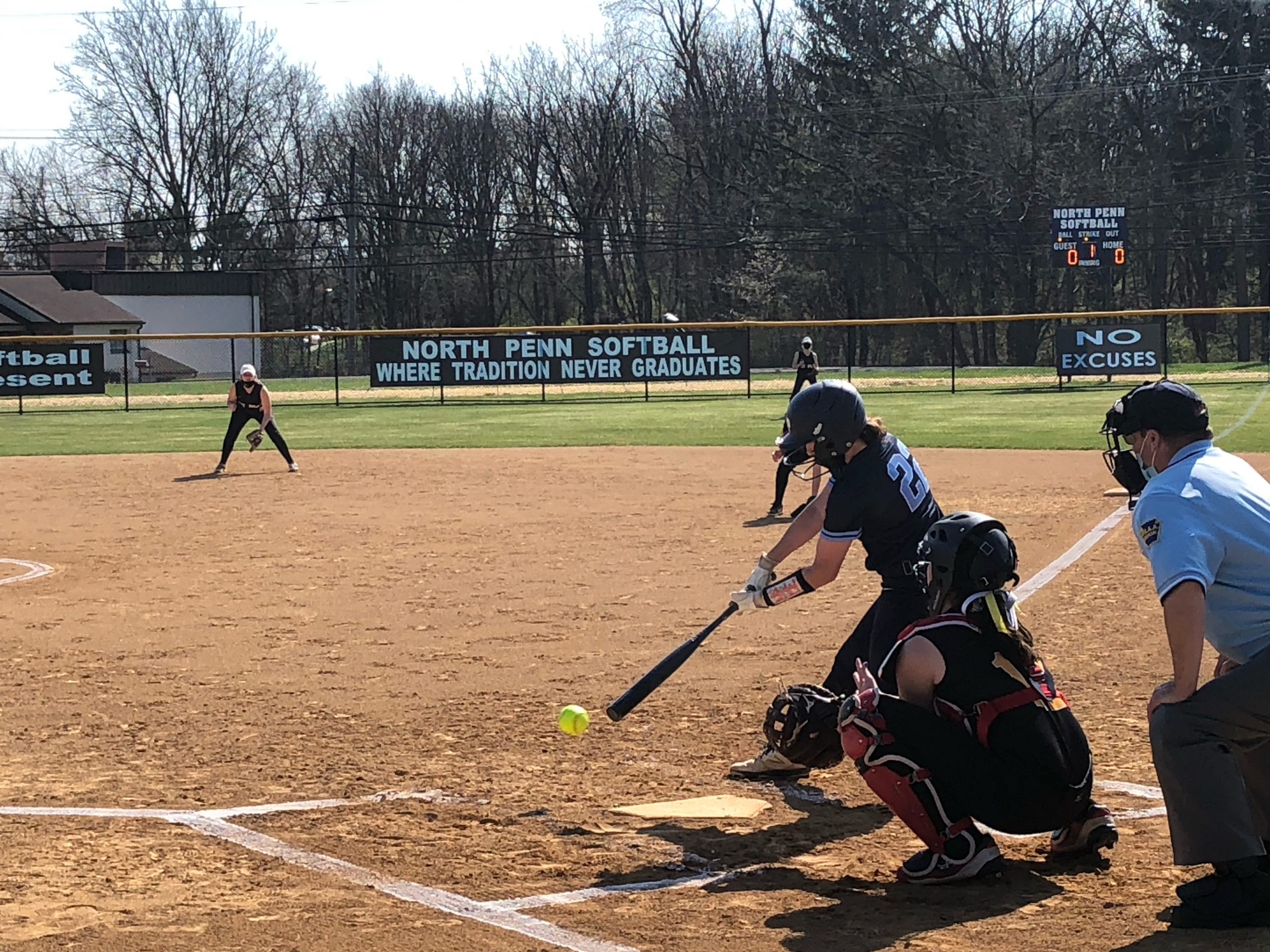 TOWAMENCIN >> There aren’t many sports relationships more important than the one between pitcher and catcher.

North Penn’s Mady Volpe had one of the best catchers around in Amanda Greaney her first three years with the Knights but with Greaney graduated at playing at Lehigh, the senior pitcher was going to be throwing to someone new this spring. Fortunately for her and North Penn, Sarah Sabocsik has proven to be a quick study.

The sophomore backstop has quickly asserted herself behind the plate and in the batting order for the Knights.

“I was very excited to catch Mady,” Sabocsik said after Wednesday’s 11-0 win over Central Bucks West. “She’s an amazing pitcher and it’s a great opportunity to be able to catch her.”

Where Greaney was a bit more of a power hitter, Sabocsik is smaller than the current Lehigh freshman but one of the quickest players on the Knights’ roster. Wednesday, the sophomore batted second and drove in the game’s first run on an RBI single in the bottom of the first.

Volpe, a Coastal Carolina recruit as the program’s record-holder for strikeouts, throws with a high velocity but that wasn’t anything new for Sabocsik. She and classmate Julia Shearer play for the same Newtown Rock Gold travel team and Sabocsik has caught for Shearer the past few summers.

At North Penn, Greaney wore No. 22 as her jersey number. Sabocsik has worn that same number for most of the time she’s been playing softball and wanted to take 22 as her own when she made the varsity roster this year.

“Sarah is unbelievable, she catches Julia in the summers but she’s also come right in and worked really well with Mady,” Knights coach Rick Torresani said. “She’s quick behind the plate, has a great arm and behind Julia, is probably the fastest player on the team.

“To lose Amanda Greaney, an all-state player, Sarah took her number and wants to be better.”

Sabocsik said she really took note of the way Greaney led and communicated with her teammates in their limited time together last year and the sophomore hopes to have that same kind of impact by the time she is a senior.

The catcher only had one hit Wednesday, but she hit the ball hard all three times she batted and her second at-bat resulted in a two-run error that helped extend the Knights’ seven-run second inning. She grounded out in the third, but helped move a runner who would score later in the frame.

Torresani said Sabocsik does have some power but he mainly likes her aggressive approach at the plate.

They are a battery team in the summer but for North Penn, Shearer and Sabocsik are partners at the top of the order. Shearer, who plays center field for the Knights on top of pitching, bats leadoff and her triple led to Sabocsik’s RBI single in the first.

“I’m just trying to find my pitch, not swing at anything bad and just hitting it hard,” Sabocsik said. “It’s easy hitting behind Julia too, because I know what she’s going to do if she’s on base.”

Even without a spring season in 2020, Sabocsik was still in the program last year and got to spend the fall and winter seasons working with Volpe. Sabocsik said Volpe was helpful in helping her set up behind the plate and the two used their offseason practice time well.

It’s only been two games, but Volpe feels like she’s on her way to building the same kind of partnership she had with Greaney.

“She’s been awesome behind the plate,” Volpe said. “She’s small, but she gets behind every ball and frames every pitch really well, plus she has a strong arm. I’m really impressed with her, she’s stepped up for us this year and I’m excited to go far with her.”

The Knights couldn’t have asked for much more in their SOL Colonial opener.

Volpe threw a gem, allowing just one hit and striking out 14 Bucks batters in her five inning complete game. The offense fired off too, with every spot in the lineup contributing either a hit, run or RBI.

North Penn led 2-0 after the first, then blew the game open with a seven-spot in the second inning where 12 hitters came to the plate.

“I focused on hitting my spots and hitting the black of the plate,” Volpe said. “I didn’t want to give them anything down the middle of the plate, I worked to hit my spots and Sarah did an excellent job catching.”

Bri Wilmont was the standout of the second inning. The Knights first baseman led off with a solo home run to center, her first official varsity longball, then laced an RBI single in her second at-bat of the inning to account for two of North Penn’s seven in the fame.

Shearer led off with a triple, walked and scored in the second and hit a double in the third inning. Annabella Smink and Rachel Lowry, the No. 9 batter, each had an RBI double while Volpe and Gianna Cimino each had a sac fly. Cimino also had an RBI single in the second.

The youthful Bucks couldn’t get much off Volpe, but shortstop Chloe Dryden did get a good piece of hitting when she belted a 1-1 pitch to right for a double in the top of the fourth inning.