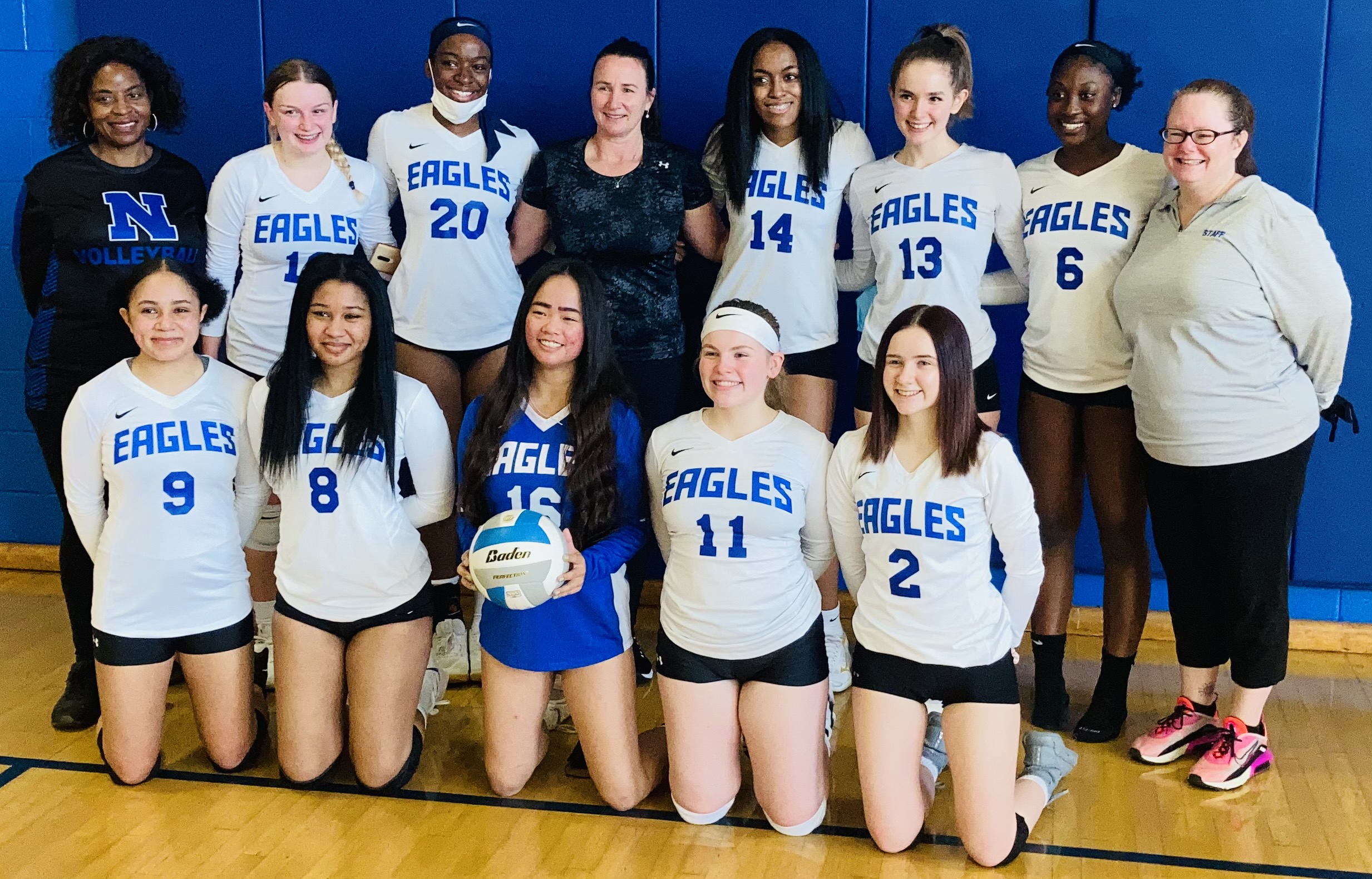 Queens of the court this spring, the Eagles went a perfect 10-0 without dropping a single set. They had just earned a 3-0 victory over Chichester early Wednesday evening at Eisenhower Middle School, and prepared for one final ride.

The Norristown Police and Fire Companies awaited, ready to escort the team back to Norristown High. It was an honor worthy of a team that persevered through unprecedented adversity to capture the first championship for Norristown since 2015, when the wrestling team won the Suburban One League American Conference.

“It means a lot,” said senior Julie McNamee. “We’ve been together since freshman year and this is the first thing that we won all together.” Norristown huddles during its match with Chichester on Wednesday, .April 7, 2021. (Kev Hunter/MediaNews Group)

Norristown won Game One 25-13, with contributions from many.

“We had a lot of good girls,” said McNamee. “They all came out strong. They played hard and they gave it everything they got.”

Norristown was even better in Game Two, winning 25-8.

Said McNamee of what made this group special: “The bond that we had with each other. We were all so close. We get along with everyone.”

Chichester battled in Game Three, playing the Eagles even until midway through, but then Norristown made its move.

The champs closed out convincingly, winning 25-13 to lock things up.

SAVING THE SEASON >> Norristown did not play in the fall due to the pandemic, but athletic director Anthony Palladino was able to put together a season in the spring, and the Eagles showed what they can do.

“Because of (the pandemic), we thought we were done,” said another senior standout, Erin Morse. “But then we found out we’re having a season. We knew we had to come in strong and prove that (the pandemic) can’t stop us from playing.” Norristown coach Connie Randolph talks to her team during its mach with Chichester on Wednesday, April 7, 2021. (Kev Hunter/MediaNews Group).

GOING OUT ON TOP >> It was quite a finale for coach Connie Randolph, whose guidance lifted the squad to a championship level. She is headed back home to Maryland, Wednesday serving as her final match with the team.

“Coach Connie taught me so much,” Morse said. “She’s an amazing coach.”

“She’s the reason I became a setter,” McNamee said, glancing over at Randolph with a smile. “Wanna be just like her.”

“It’s tough because this is my last year,” Randolph said. “It’s sad to leave these girls. I would do it forever if I could.” Seniors Julie McNamee and Erin Morse were instrumental for Norristown in its win over Chichester on Wednesday, April 7, 2021. (Kev Hunter/MediaNews Group)

“These girls have been with me since they were 13 or 14 years old,” Randolph said. “We worked out. They lifted weights. They did crossfit. They did summer with me and I had them in the gym, non-stop for four years.

“What better way to go out than on top.”