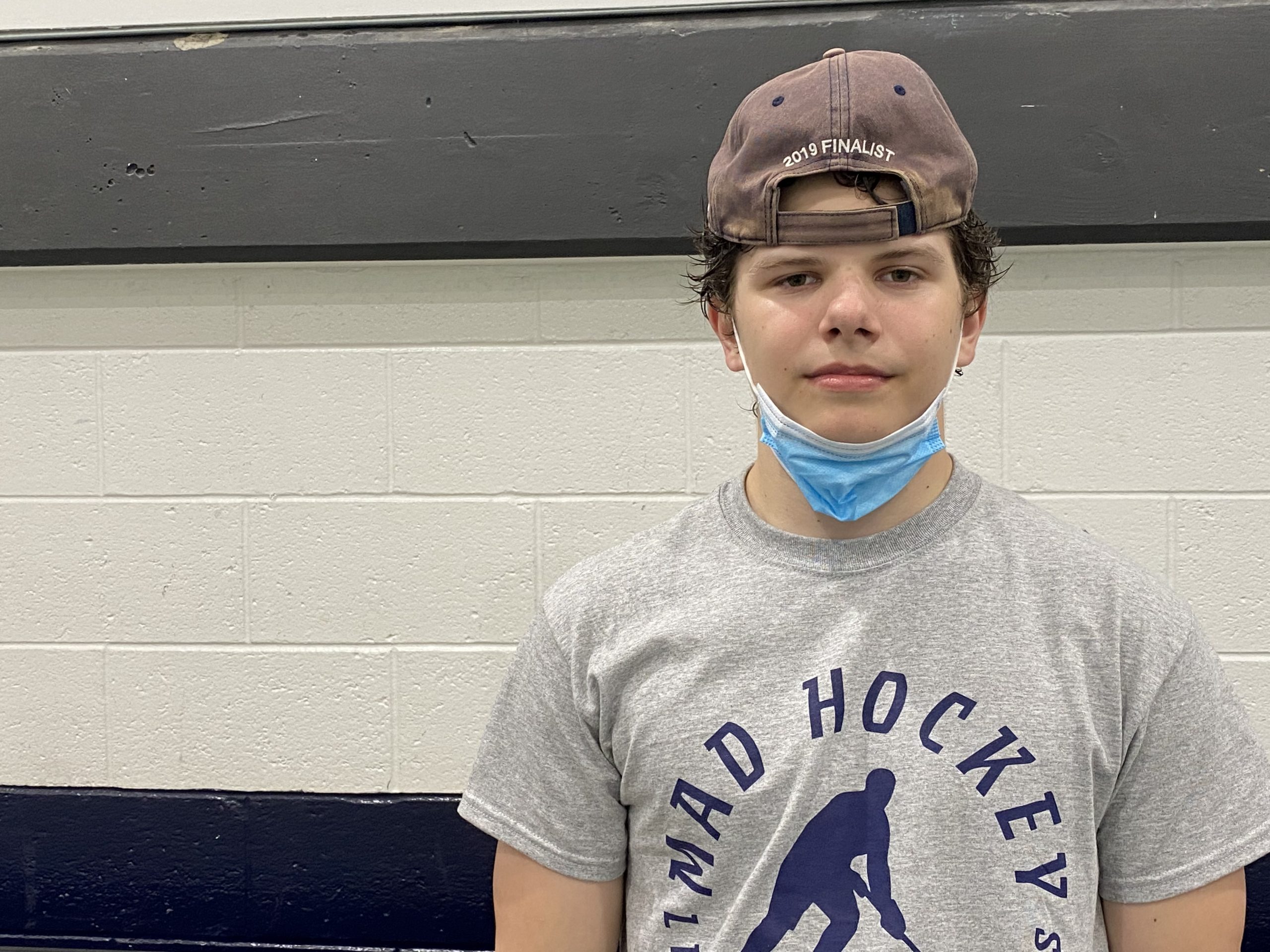 Pennridge's Aidan Boyle scored one of the Rams' three first-period goals in the their 4-2 win over Central Bucks East in the Flyers Cup AA first round on Tuesday, April 6, 2021. (Mike Cabrey/MediaNews Group)

HATFIELD TWP. >> When Central Bucks East scored early in the third period to pull within 3-2 Tuesday night, it wasn’t hard for the Pennridge ice hockey team to feel a bit of déjà vu.

Last Wednesday in the SHSHL AA semifinals, the Rams took a two-goal lead into the third period before Pennsbury rallied to hand them an overtime defeat.

“We were in the same position last week in the playoffs and we just kept panicking and making mistakes that we shouldn’t of,” Pennridge’s Blake Stewart said. “So remain calm – learn from last week.”

Stewart providing a steadying hand for the Rams in the Flyers Cup AA first-round contest, answering No. 7 CB East’s tally with a goal of his own just 71 seconds later.  The strike put the 10th seed back up two and the margin stayed that way as Pennridge advanced with a 4-2 victory at Hatfield Ice.

“You got a two-goal lead going into third again tonight, they get one really early again and again it’s like you really got to bear down there,” Rams coach Jeff Montagna said. “And when your senior captain, again a minute later, steps up and buries that, I think that took a lot out of CB East from that point moving forward, I really do.”

Pennridge built a 3-0 third with a strong first period, Aidan Boyle collecting a goal and an assist as the Rams found success with a simple formula of getting pucks and players to the front of the net.

“We knew we aren’t going to beat them with a bunch of pretty goals,” Boyle said. “We just had to get to work, work harder than them and that’s what we did.”

The Patriots struck for the second period’s lone goal then cut the Rams’ advantage to one at 12:41 in the third. But it didn’t take the Rams long to answer – Aeryk Lehrhaupt sending the puck from the boards toward the net, Cooper White getting a slight touch on it to direct it through a pair of defenders to Stewart alone in front. The senior, as he was losing his footing, slid a shot around the East goalkeeper Matt Mangiacapre and in with 11:30 remaining.

“To be honest, I didn’t even know the puck was at my feet,” Stewart said. “I knew it was it behind the net and I wanted to get in front, see if I can get a rebound and I see the shot, I look at the net and then it’s in my feet and I just put in.

“It kind of was an accident on my part but if it wasn’t for the other kids on my line to feed me or be in the right spots that wouldn’t of happened.”

The Rams, who reached the Flyers Cup AA semifinals in 2019, move on for another chance at Pennsbury in the quarterfinals 6:30 p.m. Thursday at Hatfield Ice. The No. 2 Falcons – who came back to beat Pennridge 6-5 in OT last Wednesday before claiming the SHSHL AA title a day later – edged No. 15 Conestoga 2-1 in the first round.

“At some point we have to prove that we’re not a 10 seed, right, and that’s really what we stressed,” Montagna said. “It’s something that for the last 10 days we’ve just pounding that home over and over and over and over, that’s what they think of us. We’re a way better hockey team than that.”

Mangiacapre made 36 saves on 40 shots for the Patriots while Pennridge goalkeeper Ryan Pico stopped 24 of 26 shots.

Boyle set up Tuesday’s opening goal, as the junior defenseman could not get an opportunity to unleash a shot but kept the puck and proceeded to find Richie Shanks in front at 9:21.

“I was looking to cut to the slot then shoot it but the other defenseman was there so I just took it wide,” Boyle said. “And then I saw him in front and gave him a little pass. I guess he went five hole.”

The Rams doubled their advantage at 5:52 – Stewart was denied by Mangiacapre but the rebound popped out near the left post and an incoming Lehrhaupt depositing the puck into the net.

“We’re not going to get a lot of highlight-reel goals,” Montagna said. “We don’t score a lot of them like that. But they finished and we sometimes struggle with that – finishing some of these chances and luckily they didn’t tonight.”

Boyle made it 3-0 Rams by redirecting a precise pass from Colin Dachowski for a goal near the right post with 3:06 left in the opening period.

“It was a beautiful pass, he just put it right on my stick, I didn’t even have to shoot it or anything,” Boyle said. “I didn’t think I was going to put that in, (the defenseman) had me tied up pretty good.”

CB East broke through at 9:12 in the second period as Connor Keiser’s shot front up top found the back of the net. The Patriots cut their deficit to 3-2 with 12:41 left in regulation on Adam Bostock’s goal from in front.