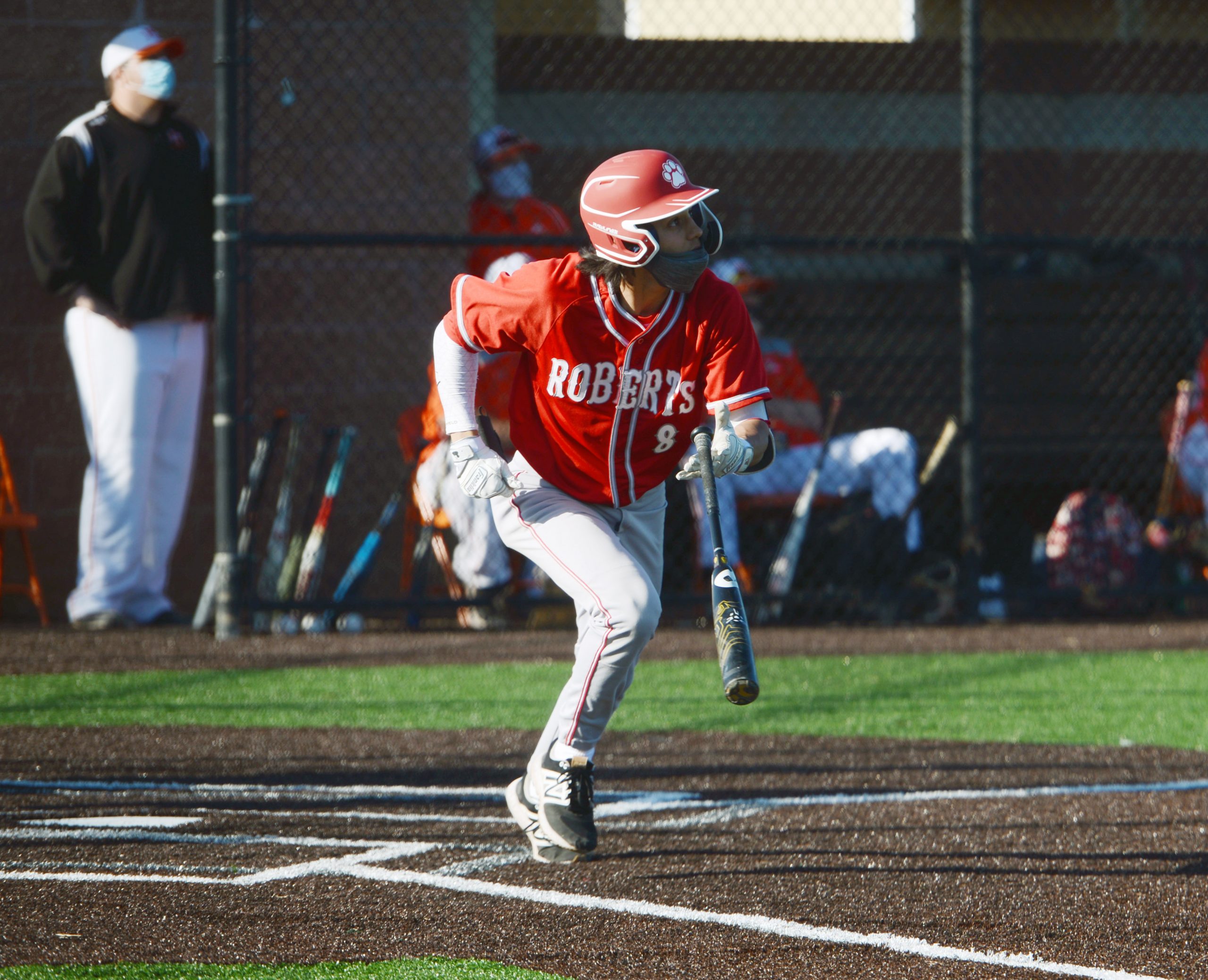 GRATERFORD >> When the Pioneer Athletic Conference champion is decided and District 1 playoff teams are selected at the end of the 2021 baseball season, Tuesday’s non-league contest between Perkiomen Valley and Owen J. Roberts won’t have any impact.

The two teams will have to wait until Friday to start piling up wins that contribute to their postseason fates, but Tuesday’s game had value in other ways.

After a season away from the field, the significance of logging the first official contest in a year and 10 months — a 9-5 OJR win — wasn’t lost upon those participating in Tuesday’s game, which also marked the first time the Vikings faced an opponent on their new turf field.

“Oh my god, it was awesome,” OJR senior Sam Morris said. “It’s been what, a year and a half now? We’re all extremely excited to be out on the field, especially this new field’s pretty cool. We’re really happy and the team’s looking pretty good. I think we’re coming together.” The names in both lineups and half-covered faces on the field (masks are still be worn for athletic competitions this spring) for both teams differed significantly from the PV and OJR squads that last took the field in 2019.

This 2021 group of seniors were sophomores two years ago and only a handful across the league broke into the varsity lineup back then.

For the majority of Tuesday’s participants it was their first time playing in a varsity baseball game.

“Today’s a good day to find out our identity as a team,” PV coach Ryan Hinkle said. “Some of these guys don’t really have a lot of varsity experience. Coming out and getting a game like this before Spring-Ford was really important to us. And guys just shaking the rust off and getting to know what our program’s all about.” PV took advantage of three walks and a hit by pitch in the first inning by OJR starter Jarred Berish to jump out to a 2-0 lead, but the Wildcats combined for eight runs (five unearned) in the fifth and sixth innings to take control and walk away with the victory.

Wildcats junior Shay Geib agave his team two perfect innings of relief in the third and fourth innings to settle OJR after an up-and-down start and was credited for the win.

OJR junior Dean Mihos tallied three hits and struck out the final three batters in the bottom of the seventh to finish off the win, while classmate Sam Cerimele drove in two runs. Juniors Blaine Waltimyer and Zach Santise also had a pair of knocks

“During summer ball it’s a lot of the same speed kind of stuff, going down to some bigger events, so I feel like I’m used to the pace of the game, but it’s good to be here,” said Mihos, who said he suited up for varsity games in 2019 but mostly sat on the bench as a freshman. “I feel like school ball is a different feel than summer ball. I think there’s more on the line for me. It makes me compete more.”

Vikings senior starter Tyler Lapetina, already a star on the basketball court, flashed his stuff on the mound with one hit allowed in an efficient three shutout innings before OJR got the PV bullpen in the later innings. Owen J. Roberts third baseman Blaine Woltimyer bobbles the before before getting the out at first base Tuesday against Perkiomen Valley. (Owen McCue – MediaNews Group)

Perkiomen Valley senior Zach Alderfer tallied two hits, including a double. Senior Ethan Ferraro added an RBI double in the bottom of the fifth that pulled PV with one, 6-5, before three OJR insurance runs in the top of the sixth.

“It’s great,” he added. “It was a nice day today, sunny, and we were all really excited to get out there.” Morris, who tallied a hit and two walks Tuesday, is one of the exceptions in the league as he was an important piece both on the mound and in the lineup for the Wildcats back in 2019 when he was a first team All-Area player.

The senior Millersville commit is one of five All-PAC players returning to the league this season and the lone Wildcat with starting experience.

With the cancelled 2020 season, he’s suddenly gone from a young gun to veteran for OJR.

“It’s a big transition,” Morris said. “I miss all those guys from 2019. It’s a huge transition to go from the young guy to the senior leader. I gotta step up, make a big step up and I think I can do that.”

The games will ramp up in importance at the end of this week when the PAC season officially gets going. And experience will mean little once players get their opening nerves out of the system.

But more obviously important than in seasons past, baseball will be played this spring and the excitement level is understandably high. New Turf >> Having already debuted its football team on the new turf field a little down the road, Perkiomen Valley’s baseball got the chance to try out its new turf diamond against OJR on Tuesday.

“It plays beautifully,” Hinkle said. “We’re never going to have a rain out again. I think our guys have been appreciative as far of what our school board has been able to do to dedicate towards improving the performances and experiences of our athletes here, which is just amazing. It turned out exactly as they wanted to.”

“We’ve been practicing on it,” Alderfer said. “We’ve got a good feel for it. We all love the turf, get some good bounces get some good rolls.”