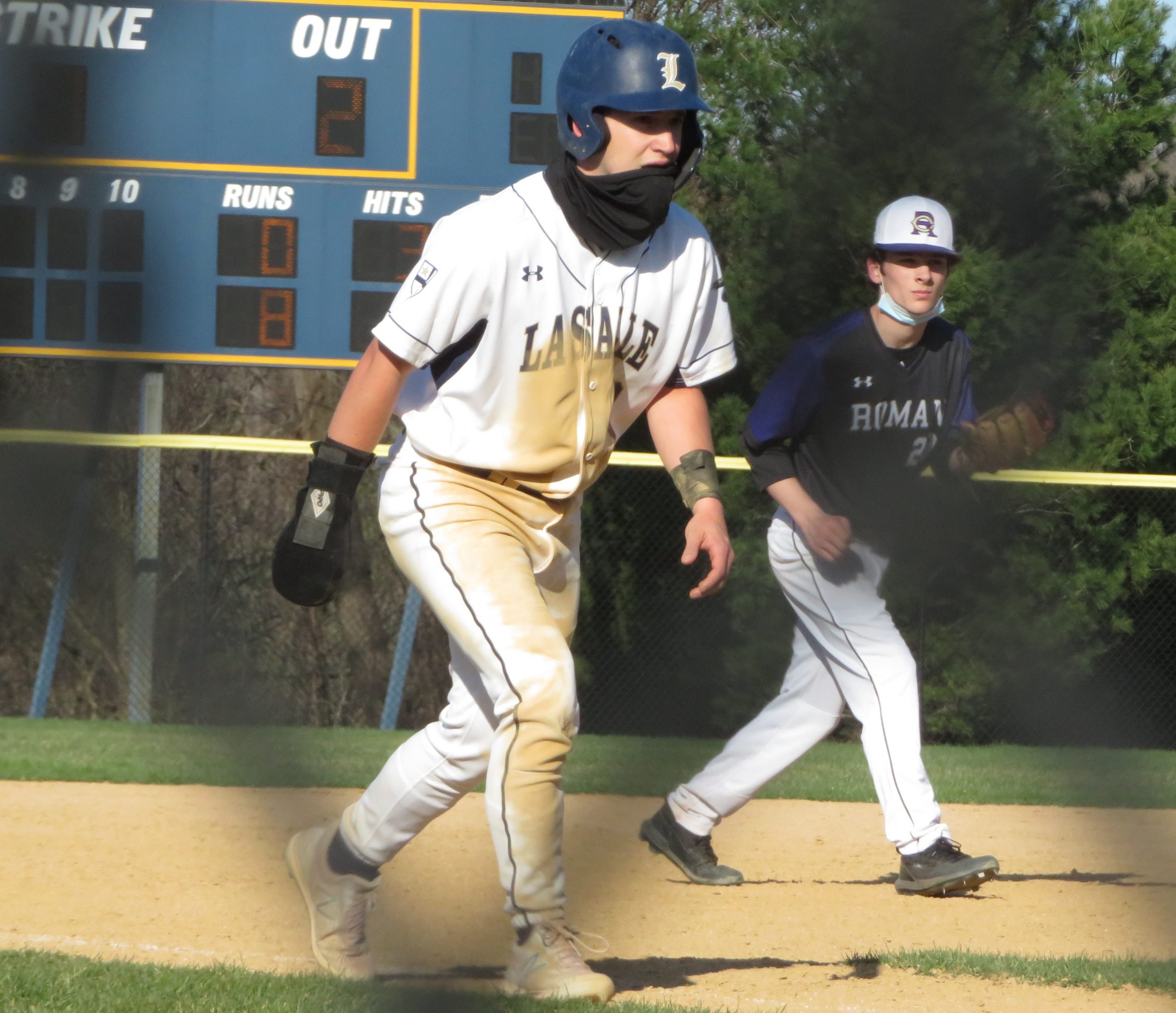 SPRINGFIELD>> La Salle was on the cusp of a comfortable win in their Philadelphia Catholic League opener against Roman Catholic Tuesday afternoon.

The Explorers led by nine runs in the bottom of the fifth inning with a runner on second and one out – a single away from a victory courtesy of the 10-run mercy rule. A pop out to second base and a strike out looking ended the inning and the Cahillites took advantage of their second chance, scoring seven runs in the top of the sixth to get within striking distance.

That’s as close as La Salle would let it get. The Explorers starters returned to the lineup in the bottom of the sixth and scored six runs before closing out the win, 15-7, at Ward Field on the campus of La Salle College High School.

“Give Roman a ton of credit for grinding and competing,” La Salle coach Kyle Werman said. “That’s what we’re in for in this league and our guys will learn that lesson quick and hard. I love how we responded in the bottom of that inning. Our guys came in and put together some good at-bats and then you feel like you’re leaving on a positive note again.”

Eric Shandler led off the bottom of the sixth after La Salle’s 9-0 lead was trimmed to 9-7. He reached on an error and advanced to third on a Joe Cattie double. Jephson Hadson-Taylor singled home Shandler and Danny Wagner doubled in Cattie and Hadson-Taylor. Wagner stole third and scored on a wild pitch to extend the Explorers lead to 13-7.

“I think resiliency is huge,” Wagner said. “Especially games down the road that come down to the wire, you have to be resilient – short-term memory and be able to bounce back no matter what.”

After two outs, Nick Astolfi tripled before Mason Sermarini hit a two-run home run to right-center field to make it 15-7.

Sermarini’s homer was the Explorers 12th hit of the game. Nine of their hits went for extra bases.

“One through nine we all have power,” Wagner said. “Like you saw, Mason (Sermarini) was hitting in the nine hole today and he went big blast out to right field. That just shows our depth, being able to hit to all fields and power all around.”

“We have guys with the ability to shoot the gap and do those things,” Werman said. “We’ve had a pretty tough stretch of arms we’ve run into early in the year – a lot of really powerful arms. Today I think their guys were competitive, but they weren’t the overmatching arms we’ve seen. I think our guys found a little more comfort and rhythm.”

The Explorers (2-2, 1-0 PCL) built their lead over the first three innings.

The advantage doubled to 8-0 in the third inning. Tim Barrett walked to lead off the frame and Hadson-Taylor entered as a pinch runner. He advanced to second on an error and scored on another error. Sermarini had an RBI single and Whitlinger plated two with a triple.

Aiden Bretschneider doubled and scored on an error to make it 9-0 in the bottom of the fifth inning.

While La Salle’s offense was putting up runs, starting pitcher Kevin Kell was putting zeroes on the board. The right-hander struck out nine batters over four scoreless innings while allowing three hits and walking three batters.

“He’s got really good stuff,” Werman said. “For him, he missed a start last Wednesday because of rain so he hasn’t been on the mound in 10 days. It’s almost like starting a new season. I think you saw a little bit of rust, some nervous energy, some overthrowing at times maybe when executing location is going to give you more success. What you saw from him – when you get into competitive situations with runners in scoring position, he does rise to that occasion. You saw a lot of those strikeouts with runners at third. That excites me because I know when it really matters you’re going to get his best version.”

Roman (0-1, 0-1 PCL) did all of its scoring in the sixth inning. Five of the Cahillites eight hits came in the sixth while Colin Myers plated two runs and Jon Carlo Coia, Gabe Rosley, Tom Rippert and Angelo Rosley each knocked in one. Another run scored on an error.

“(Roman’s) tough,” Werman said. “They always are. Those kids compete. They’re going to grind out at-bats. Nothing is easy … The Catholic League is really tough. You can’t take any lead for granted. As a coach, it’s a gamble up 8-0 to wholesale switch, but I trust my guys to do that and I think we’re fully capabale, it’s just disappointing when you don’t get enough strikes to stay in it.”

La Salle is back in action Thursday when it travels to Archbishop Carroll for a PCL game at 4 p.m.