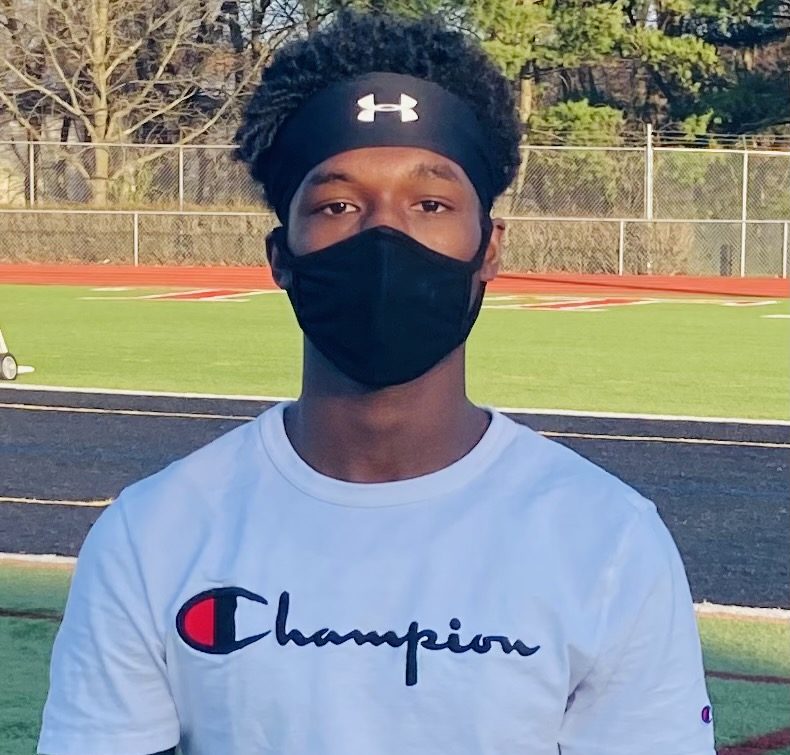 Kasey Savage swept the jumps for Hatboro-Horsham in its win over Wissahickon on Tuesday April 6, 2021. (Kev Hunter/MediaNews Group)

HORSHAM >> When looking for an early-season test, Wissahickon and Hatboro-Horsham have each other.

“It’s a really big win. Wissahickon’s usually our biggest competitor, one of the strongest teams in the (Suburban One League Liberty Divison),” the Hatters’ Kasey Savage said. “So we really made a statement going into our other meets.”

Many supplied the penmanship for the Hatters on Tuesday, as a balanced Hatboro-Horsham boys squad emerged with an 83-67 victory over the rival Trojans.

Meanwhile, the Wissahickon girls were sprinting and jumping to an 82-67 victory over the Hatters.

“The weather was beautiful and we always have a wonderful meet with Hatboro. They run a great meet, they’re friendly competition, and we match up really well with them,” said Trojans coach Heidi Butt. “So that’s a really positive experience for our girls, and they respond to that.” Mila Jovanovic won the 400 for Wissahickon in its win over Hatboro-Horsham on Tuesday, April 6, 2021. (Kev Hunter/MediaNews Group).

Personal bests decorated the results sheet for both schools.

“There was a lot of good competition so a lot of people could run fast times,” said Wiss’ Mila Jovanovic, who won the 400-meter dash and placed second in the 200.

Due to the pandemic wiping out the 2020 season, sophomores are experiencing their first spring of high school track.

And Jovanovic is excelling.

“I’m still experiencing everything for the first time, but it’s really cool though,” she said. “Whenever I come to practice, it’s so much more fun than running by yourself. I always wanna run with them.” Kasi Brown swept the jumps for Wissahickon in its win over Hatboro-Horsham on Tuesday, April 6, 2021. Kev Hunter/MediaNews Group)

Wiss also displayed its strength in the jumps, where, Kasi Brown was outleaping everybody.

“I was close to an 18-foot jump, which is really what I’m hoping for this season,” the senior said.

With those marks, she has already qualified for districts in high jump and long jump.

Both squads have seen their numbers dip this spring due to the pandemic, but the bond is tight.

Said Butt: “The kids who show up every day work hard for us. If I showed up and said, ‘we’re running to Delaware.’ They would say, ‘okay.'”

Hatboro-Horsham’s 4×8 and 4×1 relays both came out with victories.

“It’s been a very interesting start but we’re having fun. Our team is small but they are feisty,” Hatters coach Anna Snow said. “It was a great day overall. We had lots of PR’s.”

The Hatter boys were looking solid, with Devon Comber winning the mile and two mile and helping the 4×8 to victory.

Savage took care of all the jumps.

“I was very pleased with the team,” Hatboro coach Mike Harmon said. “We’re strong in distance and we have some people in the sprints and hurdles. The jumps were strong as well.

“We got a couple surprises, a couple seconds and thirds that were really nice for us. And that ultimately helped us pull out the battle between us and Wissahickon.” Said Comber: “It’s always a blessing to win. We definitely wanna repeat as champions of the league.”