Chapman does it all in Ridley’s win over Haverford 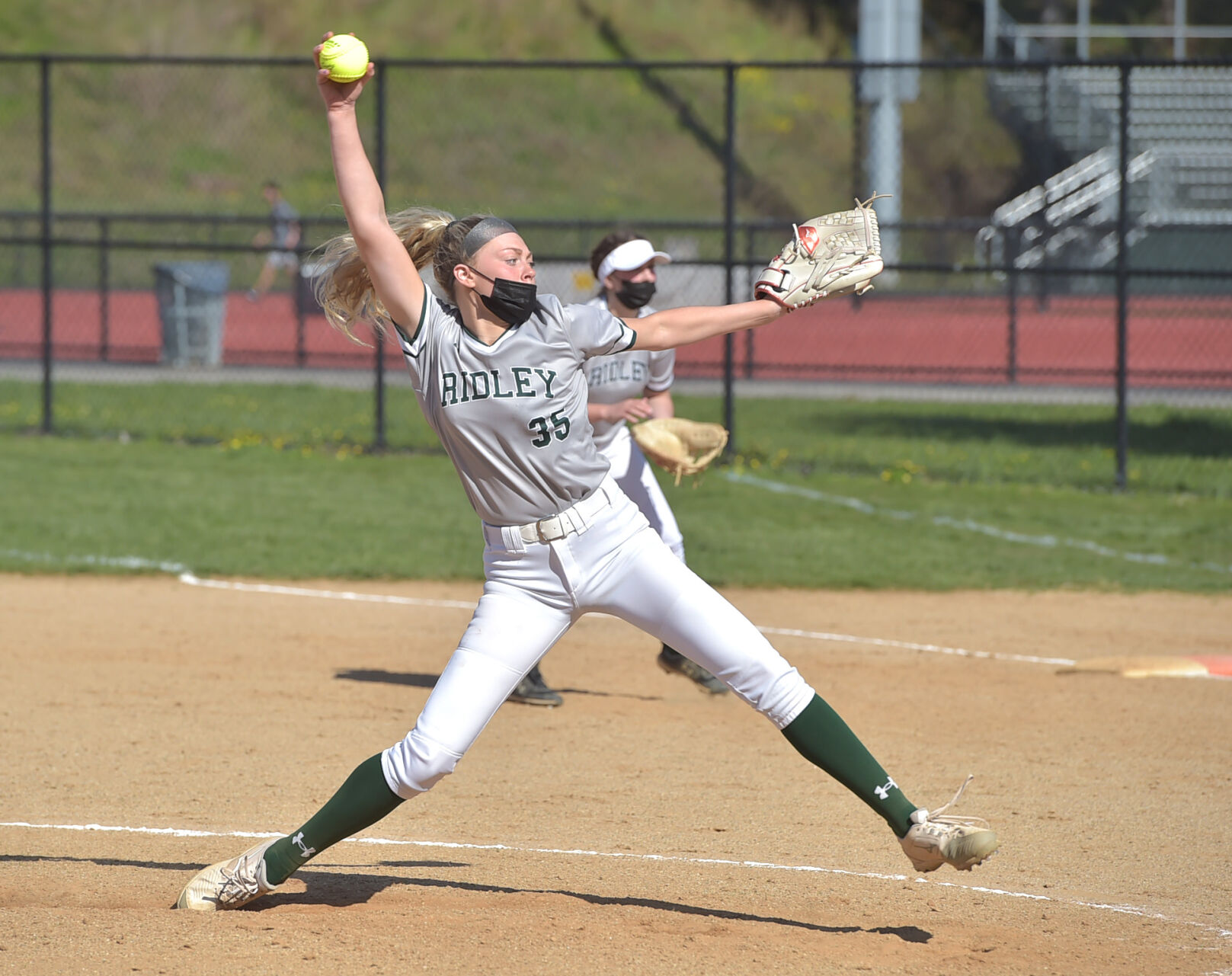 Ridley's Madison Chapman was the difference on the mound and at the plate as Ridley defeated Haverford 2-1 on her pitching and RBI double. (PETE BANNAN/MEDIANEWS GROUP)

RIDLEY TWP. — Of the many memories Madison Chapman missed out on last year, sharing one final softball season at Ridley with her older sister topped the list.

Morgan Chapman was one of six seniors on what was expected to be an extremely talented Green Raiders team that didn’t play in 2020. The coronavirus pandemic shut down high school sports everywhere, and robbed the Chapman siblings of an opportunity to win a Central League championship together.

The good news is Madison and Morgan can reunite on the softball field in due time. The younger Chapman will join her sis at East Stroudsburg University in the fall.

In the present, Madison Chapman is focusing on her senior season with the Green Raiders and she is off to a great start.

Chapman pitched a gem Tuesday, striking out seven Haverford High batters in a 2-1 Ridley win. She is grateful to be playing high school ball again after a lost season. Ridley and Haverford are considered to be the top teams in the Central League. Chapman outdueled Haverford ace Emma Taylor, who was equally as effective from the circle.

But it was Chapman who got the the best of the Fords. She allowed four hits and struck out seven in a complete game performance. Chapman’s only blemish was a seventh-inning home run ball off the bat of cleanup hitter Kerri McCallum, who blasted one over the center-field fence for Haverford’s lone run.

“I didn’t let that bother me, knowing that they’re a good team,” Chapman said. “I just do my best and know I have a good defense behind me. I just did my thing.” Chapman did just about everything well Tuesday. She knocked in Ridley’s first run with an opposite field, ground-rule double in the fourth inning. Shortstop Haley McMenamin followed with a seeing-eye single, driving in Chapman to give Ridley a 2-0 advantage.

Chapman started a 1-3 double play in the sixth inning, snagging a line drive and turning to first to throw out Brooke McKeown, who had reached base with a single.

“That was pure instinct right there,” Ridley coach Brooke Berger said. “I don’t think she had time to do anything other than just reacting and making the play.”

Ridley catcher Paige McLaughlin added two hits and scored a run. The Green Raiders are off to a 2-0 start.

“We had two good Central League teams that we faced starting off, Garnet Valley and Haverford,” Berger said. “In the past, we’ve had some easier games in the beginning, but this year we knew that we have to battle from the very beginning. We really practiced hard this offseason to make sure we were ready, because we knew we had to start strong. … This was a good win and Madison pitched great.”

Taylor was a tough-luck losing pitcher. The junior scattered four hits and struck out nine. McCallum and Rachel Yocum each doubled for the Fords. “We didn’t lose any seniors last year, so essentially we have the same team that we started with practicing last year,” said Haverford assistant coach Jill Marshall, who is the team’s former head coach. Marshall spoke on behalf of current head coach and team bus driver Bob Newman, who was a one-time assistant of Marshall’s.

“We’re happy the girls are back together and we feel we have a good team. … We had our chances today and had runners in scoring position multiple times, but we just needed someone to come up with a big hit.”

Amanda Smith had a solid day at the dish with three hits. Brianna Kelly added an RBI for the Tigers.

MN received a strong outing from Kelsey Racine, who pitched a complete game with eight punchouts.

Audrey Kochanowicz was a pest at the top of the lineup for the Panthers, going 3-for-4 with a run scored. Gen Kozub, who suffered the loss (three earned runs, three Ks), contributed a hit and a walk.

Garnet Valley 16, Lower Merion 0 >> Morgan Mesaros homered and drove in three runs for the Jaguars, who made easy work of the Aces. Anna Sidlowski (three strikeouts) and Kelly Cornog (seven) combined to pitch a two-hit shutout.

Annie Bechtold chipped in a single and three RBIs. Maura Coleman went 2-for-3 with a pair of RBIs and Dana Schmoyer added a single and an RBI.

Springfield 11, Harriton 1 >> Springfield pitcher Sam Ciasullo struck out 10 and allowed no walks in a dominant performance. Ciasullo helped her cause with a home run.

Anna Reisner was 2-for-2 for the Rams.

Archbishop Carroll 13, Hallahan 2 >> The Patriots scored nine runs in the third innings and never looked back. Lauren Martin led the offense with two hits and three RBIs. Maya Preston also supplied a pair of base knocks.