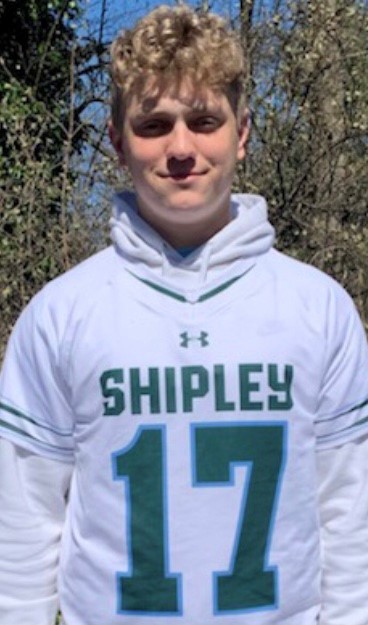 The senior co-captain scored 16 goals and 11 assists for the Shipley boys lacrosse team (3-0 as of April 3) after a 2019 season in which he tallied 29 goals and 25 assists for a Gators squad that was 12-5 and finished second in the Friends’ Schools League. Shipley head coach Joe Donnelly said, “What I’m most pleased with Josh is that, along with our other two senior captains TJ McCabe and Ben Gillen, he has embraced his role as a leader of a very young squad. Five of our starters are freshmen, one is a sophomore, which means six of our starters have never played high school lacrosse before.  Josh, as well as TJ and Ben, has been the foundation in a very productive teaching preseason, providing the necessary example at practice for the young guys and as a unit we are improving every day.” Next fall, Gallia will attend University of Tampa, where he will play lacrosse.

Q: What did you work on most during the past off-season? What were your pre-season goals for the 2021 Shipley lacrosse season?

A: During the off season my biggest focus has been working out and gaining weight to get ready for college, which has been paying off in my Shipley season. Over the long off season I have been working a lot on my right hand as well as shooting and new dodges. My pre-season goals were to come out and have a great senior season with what we have as we have very limited numbers. We have been off to a great start, and cannot wait for the rest of the season.

Q: Tell us a little about your lacrosse training during this past COVID pandemic year, the biggest challenges you faced as a lacrosse player due to the COVID pandemic, and how you dealt with those challenges.

A: The biggest challenge I have faced was losing my junior year season for lacrosse. It would have been our strongest year, as we graduated four college lacrosse-bound seniors. Lots of work was put in for that season, which sadly we didn’t get to have. As a result of the pandemic, though, my training has been great. During quarantine I would go to Radnor memorial field and play for hours every day to get through it. I had good summer, fall, and winter seasons with club/box teams which was fun and kept me in good shape.

Q: How do you see your role as a senior captain, on and off the field?

A: My role, as well as my co-captains, as a senior is very important this year. We have a small, closely-knit team that just keeps getting closer and building chemistry. Our role on the field is very important in games as well as practices as we try to hold everyone to a positive/high standard. Off the field we have held a couple team dinners which have been great and we have been doing everything we can to put our team in the best position for success.

Q: What position(s) will you play at the University of Tampa? What do you think is the best part of your game, and what are you working on most at the current time?

A: At Tampa, I will be playing attack probably, along with some offensive middy, which I am looking forward to. I would say the best part of my game is my vision and being able to find the open pass. Something I am working on is getting my right hand equally as strong as my left hand, which is getting there.

Q: What has been your favorite experience with the Shipley boys’ lacrosse team (to date)?

A: My favorite experience with Shipley lacrosse was two years ago during my sophomore season when we beat a Florida team called Riverview in our spring break rivalry game. We lost to them for years previously but that year we came out strong and beat them, which was awesome to be a part of.

A: My start in lacrosse was later than most others – I picked up a stick for the first time in fifth grade and started really playing in sixth grade. When I started, I accidently went to a Radnor lacrosse tryout that I thought was only a clinic. I ended up making the A team, and ever since then have fallen in love with the game. Mark Duncan was the first one to put a lacrosse stick in my hand and introduce me to the game. He was a great mentor and really brought me up in the lacrosse world. He introduced me to Kevin Crowley, who also coached me but was another big mentor to me as well. He taught me lots of great skills and helped me take my game to the next level.

Q: You wear uniform jersey No. 17 for Shipley lacrosse – is there a reason you picked that number?

A: My lucky number has always been 17, as my birthday is Jan. 17 and my mom’s is Feb 17. Wayne Simmonds was also my favorite Flyers player who wore No. 17. Henry Reed, my ex-teammate wore No. 17 during my 9th,10th, and 11th grade seasons, so I previously wore No. 7. This year I finally got my lucky number.

Q: What do you think you might want to major in at the University of Tampa?

A: I am planning to major in business and entrepreneurship at The University of Tampa as well as minor in marine biology with their great marine centers down there.

Favorite book: The Young Man and the Sea.

Favorite pre-game pump-up song: No I in Team by Arizona Zervas.

Person I most admire, and why: “Mark Duncan, for teaching me how to do a shot called the worm burner.”