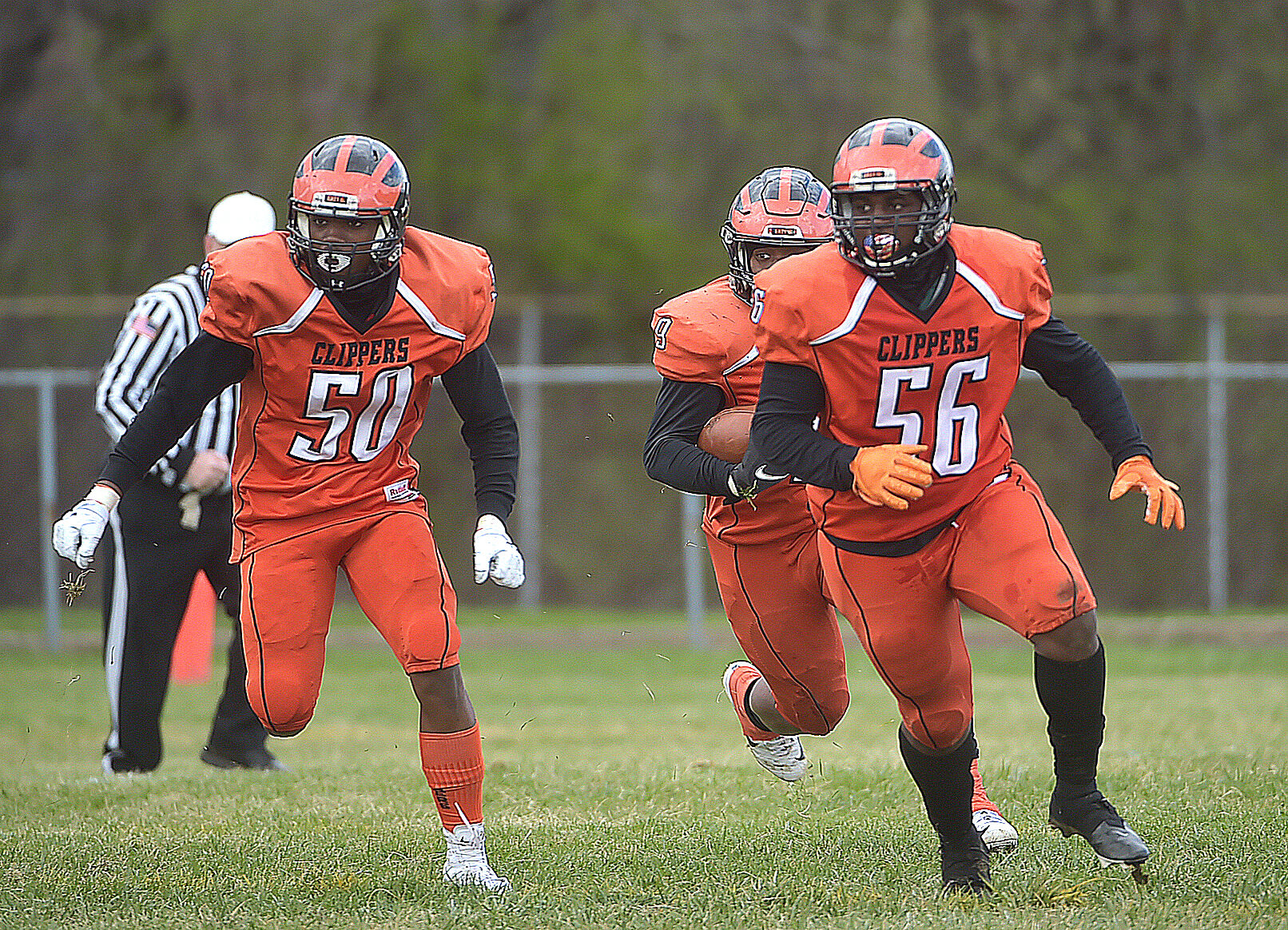 Chester's Anton Sterling, center, is safely tucked behind linemen Jahsyed Cruz, left, and Jahiem Golden in the first half Thursday. Sterling ran for a touchdown and 100 yards in a 30-0 win over Penn Wood. (Pete Bannan/MediaNews Group)

YEADON — Defense means a lot of things around the Chester football program.

In the spring of 2021, it means doughnuts – as in a run to Dunkin’ made by the coaches for the defensive unit to start Monday practice on a celebratory note after each shutout.

“We get doughnuts every Monday every time we skunk somebody,” linebacker Jakai Boegertey said Friday. “We love doughnuts.”

For the fourth time this season, the coaches will be ordering up four dozen to feed a hungry defense on Monday.

Chester made it four games without allowing a point this season, holding Penn Wood to 83 yards of total offense in a 30-0 win at Kerr Field Thursday afternoon in a battle of United X League unbeatens.

Baked goodies aside, Chester isn’t a stranger to shutout streaks. It started the 2019 season way back when with three straight shutouts before Bartram scored on them, a harbinger of the three-game losing streak to come. Last on that run was a 15-6 loss at Penn Wood.

Thursday, the defense made sure that history came nowhere near repeating. The Clippers have outscored opponents 109-0 this season, to the detriment of the coaches’ doughnut budget.

The Patriots (3-1) moved the ball well on their first two drives, penetrating deep into Clippers territory. But Darron Miller stopped the first drive with a tackle for loss on a pass to Malik Brooks in the flat on fourth-and-4 at the 26, then Jerimiah Gates tossed quarterback Jason Kempf for a loss on fourth-and-4 at the 7.

Penn Wood only got that close one more time over the remaining two and a half quarters, and that fourth-quarter attempt ended when Colin Ferrell picked off Kempf on fourth down.

“We came out strong,” Penn Wood running back Jordin Jones said. “We wanted to come out the way we did, come out strong and get big plays. It just fell off. Everything stopped working and they just wanted it more.”

The young Patriots struggled after those first two drives. Jones ran for 40 yards on 19 carries; he had 43 yards on his first 11 totes. Brooks touched the ball just three times, rarely getting space outside the tackles. Mike Price ran off a 22-yard jet sweep and returned a kickoff 54 yards to set up the series ending in Ferrell’s interception, but he got just three offensive touches. Kempf struggled, going 7-for-11 for 25 yards.

Much of the problem is that when the Clippers tackle you, you stay tackled. The tone is set by the ball-hawking linebacking corps of Boegertey, Miller and Noble Thompson, a precocious group of which only Boegertey is a senior.

Anton Sterling a 19-yard TD but a little love for the pulling guard Jahsyed Cruz. Follow the big man to paydirt
8-0 Chester pic.twitter.com/UNczcdfl6Z

From there, Chester’s running game took over. The Clippers carried 41 times for 208 yards, the average was even higher before the reserves entered. Anton Sterling, who opened the scoring with a 19-yard dash at 3:08 of the first quarter, carried 13 times for 100 yards. He’s the workhorse that was needed for only two totes in the second half.

Quarterback Isaiah Freeman carried seven times for 25 yards, including scores of 14 and two yards. He tossed a 40-yard bomb to Jason Stone on a modified Philly special in the fourth quarter.

With Boegertey (six for 37) and Zahki Jimerson (five for 38) also productive on the ground, the focus shifts to an offensive line that dominated the trenches. Sterling’s touchdown was instructive: A sweep around left end, he broke the line with guard Jahsyed Cruz pulling in front of him, the two trucking into the end zone in convoy.

“We know the linemen, they’re going to block regardless,” said Sterling, who scored five times in last week’s rout of Reading. “They block every down. And they continue to block every game. They get us yards. … It’s amazing to know that they can move like that and I’m right behind them, knowing they can fill the blocks for me and I fly right past them.”

After all the waiting, Chester is making the most of its chance to get on the field. It informs the mentality of no let-ups, even when games get out of hand, as three of their outings have been.

Isaiah Freeman with one hell of a run option for an 18 yard TD in the final minute of thr first half. Two pointer good. Chester up 16-0 pic.twitter.com/iKp94KV5pN

“It feels good, knowing what we went through, knowing corona shut us down, we couldn’t do the things we wanted to do,” Sterling said. “And we’re out here winning every game like we’re supposed to. We worked hard for it. Every single day we trained in the offseason, even though we couldn’t be here, we trained and then we just come out and get the W.”

And, you know, if there’s a little extra glazed motivation in that mix, so be it.