Haverford’s depth too much for Conestoga in Central League semis 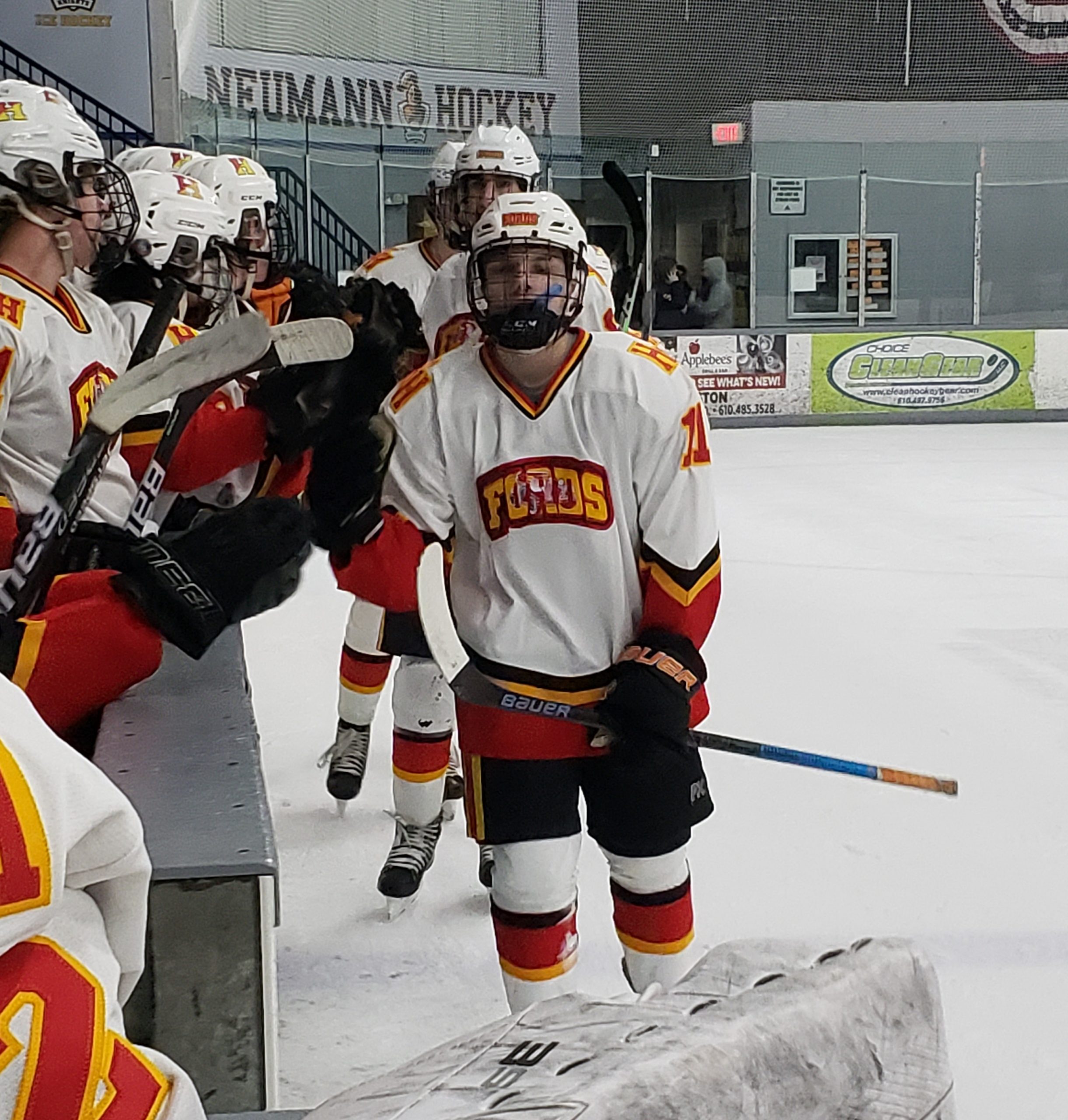 ASTON — With the way the 2020 season ended, no team has a monopoly on the “unfinished business” storyline. For Haverford hockey, the mantra is a little different.

The Fords’ business had been completed when the COVID-19 cancellations descended last March, thanks to a loss to Springfield in overtime of the Central League final and a setback to Perkiomen Valley in the Flyers Cup, both with the Fords as the nominal favorite.

Playing as the top-seeded favorite again this year, Haverford is showing lessons have been learned.

The Fords jumped all over No. 5 seed Conestoga Tuesday night in the Central League semifinals, ending the game in two periods with a 10-0 victory.

It moves Haverford into Wednesday night’s final against the winner of the late game, No. 3 Springfield and No. 7 Ridley.

“It’s a little unfinished business for us,” forward Jagur McClelland said. “I think we’re going to use it as motivation. We kind of have the whole season. The loss in the Central League championships, that was our main goal, and we want to get a state championship, but we also lost that. I think we’re just using it as motivation to keep moving forward, keep winning games.”

Mike McGeoch the net-front presence to tip it home. Nate Radabam the point drive. 2-0 Haverford on the PP pic.twitter.com/FdtxuYTq1F

Haverford left no doubt, outshooting Conestoga 23-3 in the first period and 42-5 for the game. It took a while to knock down the wall put up by Conestoga goalie Luc Beauparlant, who made 32 saves and was outstanding early. But when the floodgates opened, there was no closing them.

The Fords led, 3-0, after a period. Then Jacob Orazi converted a feed from McClelland 13 seconds into the second period, and Dan Quartapella cleaned up a rebound of an Aidenn Johnson shot exactly a minute later to make it 5-0.

The key was throwing pucks on net and making sure Beauparlant had precious little time to think. He was solid early, particularly with traffic in front of the net, able to stop 14 of the Fords’ first 15 offerings. But three power-play goals and a constant strafing of rubber wore him down.

“I think getting pucks on net was the most important part,” Fords defenseman Nate Rabadam said. “We struggled with that last year and we really worked hard on that this year.”

Paul Perricone to Gus Scuderi (what a hockey name) on the PP. Rout is on. 8-0 Fords pic.twitter.com/5Wp0PH8jmd

Conestoga didn’t help its cause. Dressing just 11 skaters, the Pioneers went to the box six times plus a pair of misconducts. That included a penalty right after Quartapella’s goal to compound the 5-0 deficit, though they killed it off. The tired legs, however, they couldn’t escape.

McClelland punished them in the first period. He came around the net and ripped one under the bar to open the scoring 1:16 in, then picked up a loose puck just inside the blueline, exited the zone, gained a head of steam in the neutral zone and zipped in to rocket a shot past a marooned Beauparlant at 10:50 to make it 3-0.

McClelland added two assists. Linemates Mike McGeoch (two goals, two assists) and Orazi (goal, two assists) were the beneficiaries. McGeoch redirected home a goal in the first and poached another off some crisp puck movement between the forwards.

By late in the second, the Fords were able to roll lines and rest for Wednesday. Freshman Gus Scuderi scored twice, including on a slap pass from the point from Paul Perricone, and Jackson McCormick added the goal to trigger the mercy rule.

“I think that’s our depth,” McClelland said. “One of our biggest things that our team has is depth. To have our third- and fourth-line guys, contribute, it’s great. We’re going to put hard teams away.”

Jai Jani stopped all five shots to come his way in the Haverford cage, including a breakaway denial of Conor Rolston shorthanded in the second period.

By then, any mystery about the result had long since vanished, as was the Fords’ objective.

“Our game plan with a game like this is bury them early, not give them life, not let them in the game early to give them confidence because it’s going to make it harder for us,” McClelland said. “I think we were the favorite, we executed early and we got it done.”