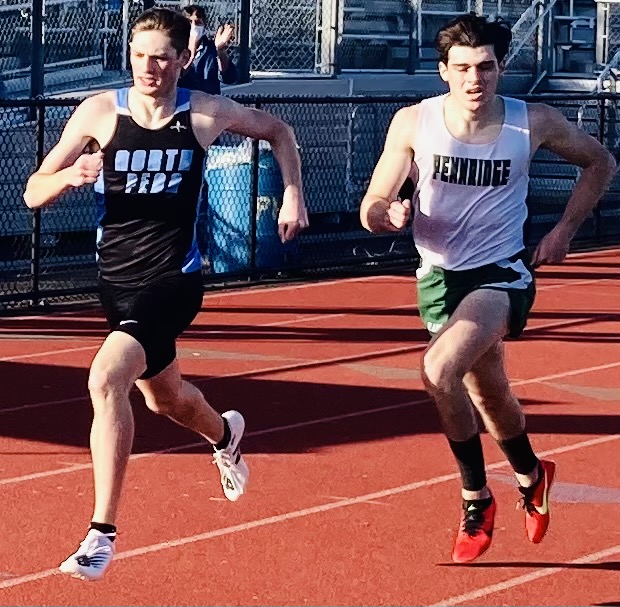 EAST ROCKHILL >> The North Penn track and field team has been a traveling road show this spring, running on a middle school’s old cinder track, in a bus circle, and also throwing indoors.
“We’re literally in a different place every day,” said Knights girls coach Brandon Turner, as the new stadium and track is being finished at NP. “And the kids have done a great job.”
North Penn’s first stop of the regular season was at Helman Field to take on rival Pennridge, and the Knights’ perseverance and desire came through in the final event of the day.
“We got out here onto an actual track and I think it really paid off, the work that we’ve been putting in,” said senior Megan Gambogi, a very busy senior on Tuesday.
With the meet on the line, Gambogi was a late addition to the Knights’ 4×400-meter relay, and she came through with a fast leg that helped power NP to a 73-68 win over the Rams. North Penn’s Megan Gambogi won the 800 and was on the winning 4×8 and 4×4 relays for the Knights in the victory over Pennridge on Tuesday, March 30, 2021. Kev Hunter, MediaNews.

“It was so nice to win, coming out here. It’s been almost two years since we had a dual meet (as 2020 was canceled due to the pandemic), so it’s very rewarding to win,” said Gambogi. “I wanted to do whatever I had to do to get my team the win.”
“They really came through at the end,” Turner said of the 4×4, which also included Sierra Heisey, Isabella Dahms and Megan Chester. “Gambogi wasn’t supposed to run and she found out that the meet was on the line and she’s a senior, and she just popped in – after two 800’s – and ran well. That was huge.”
Said Gambogi, who also won the 800 and helped the 4×8 to victory: “It was just a very successful day.”
The NP boys came through as well in the Suburban One League Colonial Division double dual meet, earning an 86-64 win over the Rams, who captured the conference crown five straight years from 2015-2019.
“We have a really good group,” said the Knights’ Gavin Zanck, winner of the 800. “I think we have a solid chance at winning the Colonial.”
Both NP squads left Helman hoping it was a promising sign of things to come: the NP girls won the SOL Continental from 2015-2019.
“It was a very good meet. Pennridge has a very good team,” Turner said. “And for it to be the first meet in two years, I think we’re all trying to figure kids out and what they’re good at, and to have it come down to the last event, it’s great.
“It’s great and it sets us up for the rest of the season.” North Penn’s Gavin Zanck won the 800 for North Penn and was on the first-place 4×8 in its victory over Pennridge on Tuesday, March 30, 2021. Kev Hunter, MediaNews.

Zanck knew he would have company in the final stretch of the 800, holding off Pennridge’s Diego Lera-Lozano, who ran to first in both the 16 and 32.
“I knew we needed those points,” said Zanck, also a key contributor on the first-place 4×8. “Diego’s insane (really good). I stayed on his shoulder, held my form the last 100. I got him and it worked.”
Meanwhile, Ashley Gordon took both the 16 and 32 for the Rams. North Penn’s Gavin Zanck won the 800 for North Penn and was on the first-place 4×8 in its victory over Pennridge on Tuesday, March 30, 2021. Kev Hunter, MediaNews.

“I’m new at the two-mile so we’re testing it out,” said the cross country and distance ace, headed to Notre Dame next year. “It’s a good mental workout, helps me in the mile.”
Said Gordon of the two-year wait to get back on the track: “It’s weird. It’s been so long. It was like being a freshman all over again.”
Gordon will be a state title contender in the mile for the Rams.
“We won on the track but North Penn is a balanced team,” Rams coach Bill Smith said. “It’s good to finally be out here, having competition and seeing the kids compete. We’re gonna learn from this and I think we can be better.”