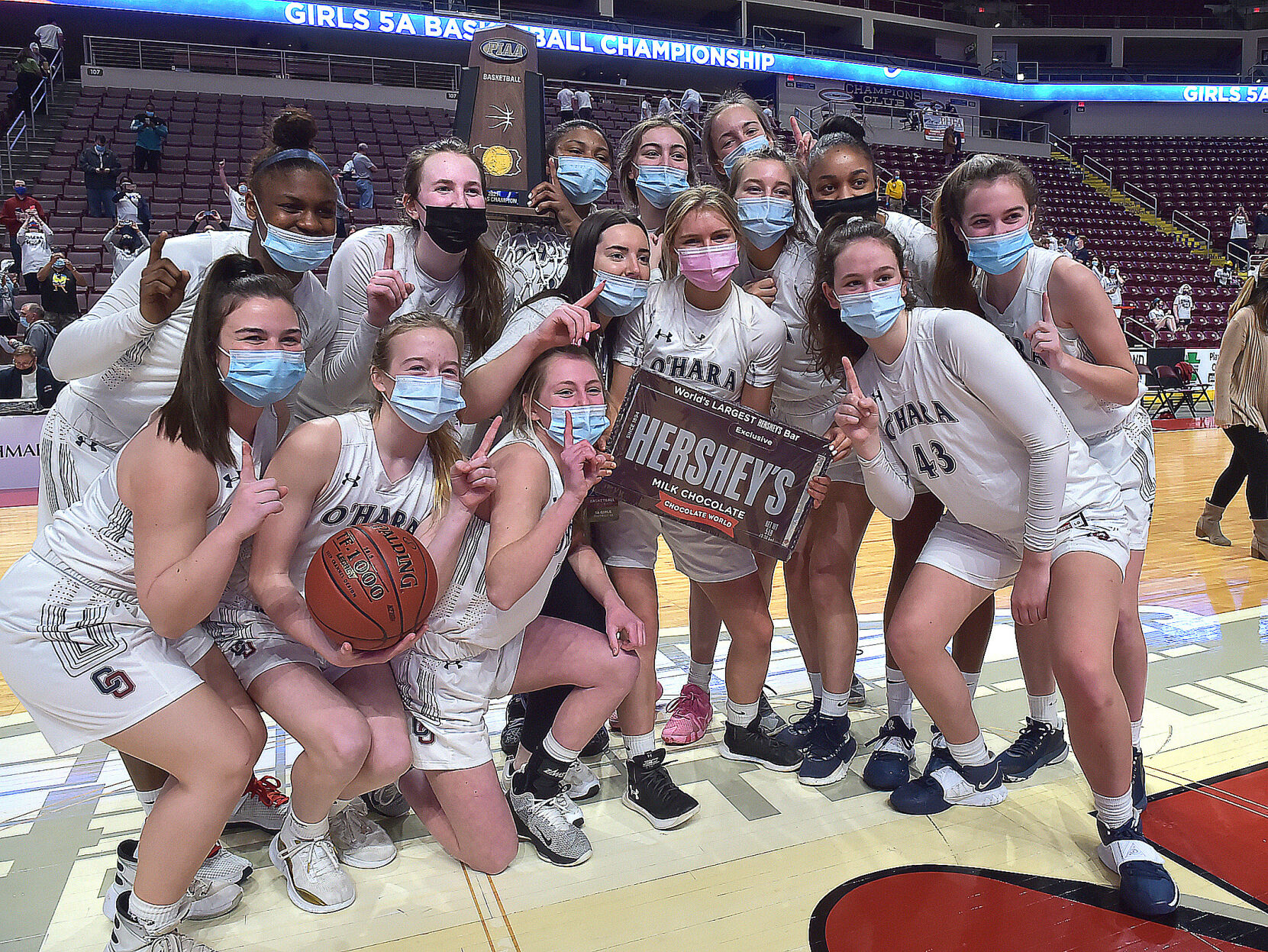 HERSHEY — The early returns to Cardinal O’Hara’s 2021 season were cause for concern.

The Lions started the year losing three of six in the Catholic League. At the time, third-year Lions coach Chrissie Doogan challenged her players to be better and learn to finish games. She wanted her juniors and seniors to play like veterans and lead by example.

“We lost at West Catholic, the third loss of the season, and that was kind of our turning point,” said junior forward Maggie Doogan, the coach’s daughter. “It was, like, do we really want this? How badly do we want this? We had to show that we wanted it.”

Ultimately, the Lions answered their coach’s call and became a great team, one for the local history books.

After that look-in-the-mirror moment earlier in the season, the Lions rattled off nine consecutive victories and advanced to the Philadelphia Catholic League final before embarking on a three-game journey in states. It was one that culminated Saturday in a 51-27 rout of Chartiers Valley at the Giant Center in Hershey, O’Hara celebrating the school’s first PIAA basketball championship.

The outcome was never in doubt.

O’Hara (15-4) won 12 of its final 13 games in a pandemic-shortened season to become the first Delco girls basketball team since Archbishop Carroll in 2012 to capture a PIAA title. The Lions made two prior appearances in PIAA finals (2009, 2016), losing both times.

“It’s amazing,” said senior Siobhan Boylan, who scored 10 points. “It’s the best feeling ever, and I’m so happy that this got to be my last game at O’Hara and we get to be the first team to bring home a state championship.”

The Lions played loose and worry-free. They started the night hitting six of their first nine attempts from the floor. Junior guard Sydni Scott swished a pair of 3-pointers in the first period as O’Hara scored the game’s first 10 points. Chartiers Valley, the last team to win a Class 5A title in 2019, never had an answer.

O’Hara came out sizzling and never stopped coming after the Colts, who were held to single digits in every quarter.

“It was on both ends of the court,” Chrissie Doogan said. “When Syd hit her first 3 and her first couple of shots, it really gets her going and it gets the confidence going for the whole team. Maggie’s blocking shots on the defensive end and that helped a lot. My biggest fear coming into the game was, are they (the officials) going to let Maggie play or is she going to get called for early fouls and stuff like that.”

Maggie Doogan was excellent. She drilled two long balls in the second quarter to give the Lions a 23-7 lead. With four minutes left before halftime, O’Hara had hit cruise control.

“Everyone wanted to play their best game tonight,” she said.

Chartiers Valley’s two junior Division I recruits, Aislin Malcolm (Pitt) and Perri Page (Colombia), were held to a combined 5-for-23 shooting and 17 points.

“We played really well as a team together, sharing the ball and talking a lot,” Boylan said. “We switched everything around with our screens, which isn’t something we ever do. We knew that their big No. 11 (Page) would try to get lobs inside the lane and we wanted to stop that from happening.”

Chartiers Valley shot 19 percent from the field (8-for-42) and committed 11 turnovers.

The Lions modified their defensive coverages in order to contain Page, and O’Hara seemed to contest every shot the Colts attempted.

“Maggie was able to play good defense on Page, who is a tremendous athlete. We went with a switching defense. Siobhan had to guard Page down on the block. We just switched everything,” Chrissie Doogan said. “Credit my assistant coaches because they sold the idea and our kids had two great days of practice and the energy level was there. … It was a little new for us, but we’re athletic enough across the board.

“We just told the girls, go out and play your basketball. It’s hard treating a state championship like any other game, but it is. I said to them, ‘Guys, the sun’s going to come up tomorrow. We have to just go our and play.’ They’ve played so much basketball together and they went out and played great tonight.”

Before the Lions headed to Hershey, they were given a pep talk by former program greats including two-time Daily Times Player of the Year Hannah Nihill and All-Delco Kenzie Gardler. Both were part of the last Lions team that made it to the state final in 2016.

“We knew we felt really good about today. We were talking about this (Friday) night, that we have such great chemistry and we were all very uplifting and believing in one another,” said senior guard Amaris Baker, who added six points, two assists and two steals. “We were, like, ‘Hey guys, let’s do this. We’ve got this.'”

“We’ve worked so hard for this and we had so much confidence today,” Baker said. “We knew that all the confidence and all the energy we ever had, we’ll use it. We had great energy.”