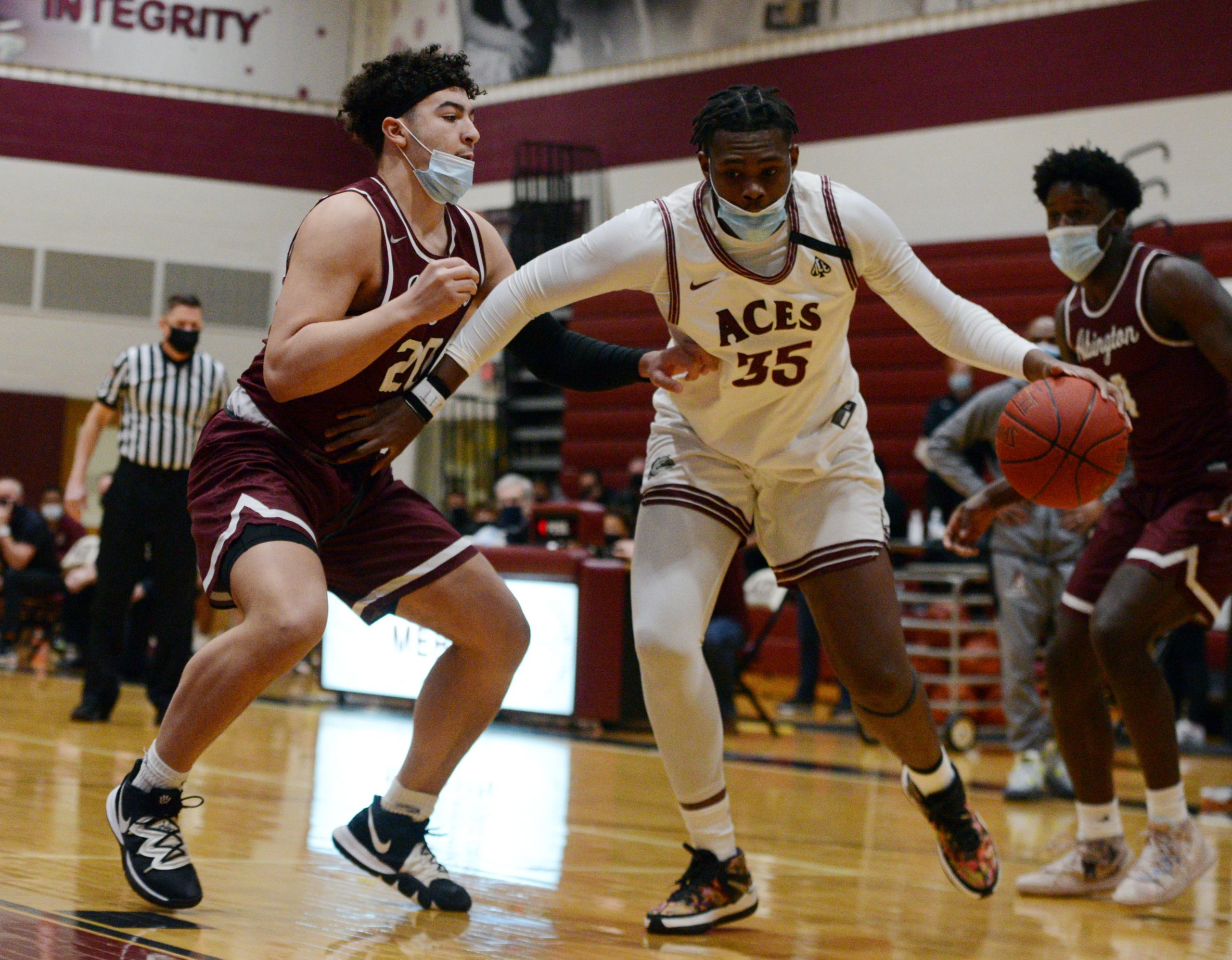 Opening its 2021 boys’ basketball season in an atmosphere of uncertainty due to the COVID pandemic, Lower Merion rose to the challenge and put together quite a memorable campaign.

The Aces (13-5) captured their first PIAA District 1 title since the days of Kobe Bryant and came within an eyelash of defeating Archbishop Wood, the ninth-ranked boys’ basketball team in the United States, in the PIAA 6A state semifinals.

It was the first time the Aces won three straight road games in the District 1 playoffs, and Lower Merion maintained its hold on Pennsylvania’s longest current consecutive state playoff streak (11 years), dating back to 2011.

“This was a really fun group to coach,” said Lower Merion head coach Gregg Downer. “They played with a lot of grit and determination. I think these players really believed in themselves.”

The biggest Ace was 6-foot-9 junior center Demetrius Lilley, who scored 20.6 points per game and pulled down 12.2 rebounds per contest. He is the first Lower Merion since Kobe Bryant in 1996 to average better than 20 points and 10 rebounds per game.

One of the trademarks of this team was its never-say-die attitude, and two of their starters were players who came back from physical setbacks suffered in their junior year – senior point guard Sam Davison (knee injury) and senior forward Zack Wong (hip surgery).

Davison, called “the engine of our team” by Downer, was a solid starter (12.0 ppg, 3.9 apg and 3.2 rpg) and made SportCenter’s Top Ten with his 70-foot- buzzer-beating shot against Harriton.

Wong, referred to by Downer as “our Swiss Army knife,” because of his variety of skills, averaged 3.5 rpg, 2.2 apg and 6.0 ppg, and converted more than 60 percent of his three-point attempt during the Aces’ torrid post-season run.

Junior guard Jaylen Shippen (6.8 ppg, 3.0 apg) also was a key contributor, coming up big in Lower Merion’s 59-50 district playoff win against top seed Cheltenham, scoring seven straight points in the first half when the Aces trailed by 12 and finishing with a season-high 18 points.

Davison, Shippen, and Brown become first trio of Aces guards to each average better than 2:1 assist/turnover ratio in the Downer era.

This spring, the Aces will be losing five seniors to graduation – Davison, Wong, and guards Jayden Morene, Phil Cook Jr. and Connor McCabe.

“Any time you lose a senior it’s painful, but these five guys are good guys and they’re going to be successful,” said Downer.

In the PIAA 6A state semifinal March 23 at the Kobe Bryant Gymnasium, the Aces gave undefeated Archbishop Wood a down-to-the-wire battle, jumping out to an early 15-4 lead, and leading for most of the first three quarters, before losing, 72-68.

Downer said, “We try to say we don’t play for close losses, but I think it was a heck of a high school game, the [Pennsylvania] Eastern final that was really a two-point game, lots of back-and-forth. We played with a lot of grit and a lot of determination. I’m not into close losses but I’m very proud of these kids. There was a lot of emotion in the air.”

“We [coaches] told the players that we were very proud of them; we didn’t think we would get much of a season in the pandemic, but we played 18 games and won the school’s first district title in 25 years,” said Downer. “We were a couple of minutes away from going to Hershey.”

In the first five minutes against Wood, Lower Merion built a 15-4 lead as Wong hit a trio of treys. By the end of the first quarter, the Aces had five treys and a 21-12 lead.

Davison said, “We came out with confidence, we had a no-fear mentality. We pushed the pace, we got to our spots, we hit our 3’s.”

In the next four minutes, the Aces went on an 8-0 run of their own, highlighted by a trey by Shippen, a drive by Davison, a field goal underneath by Lilley, and a bundle of Wood missed shots. With 2:01 to go in the third quarter, the Aces led the ninth-ranked team in the nation 51-43.

The Vikings brought the ball inbounds by arching a long pass almost the entire length of the court. Randolph grabbed the ball and scored just before the buzzer.