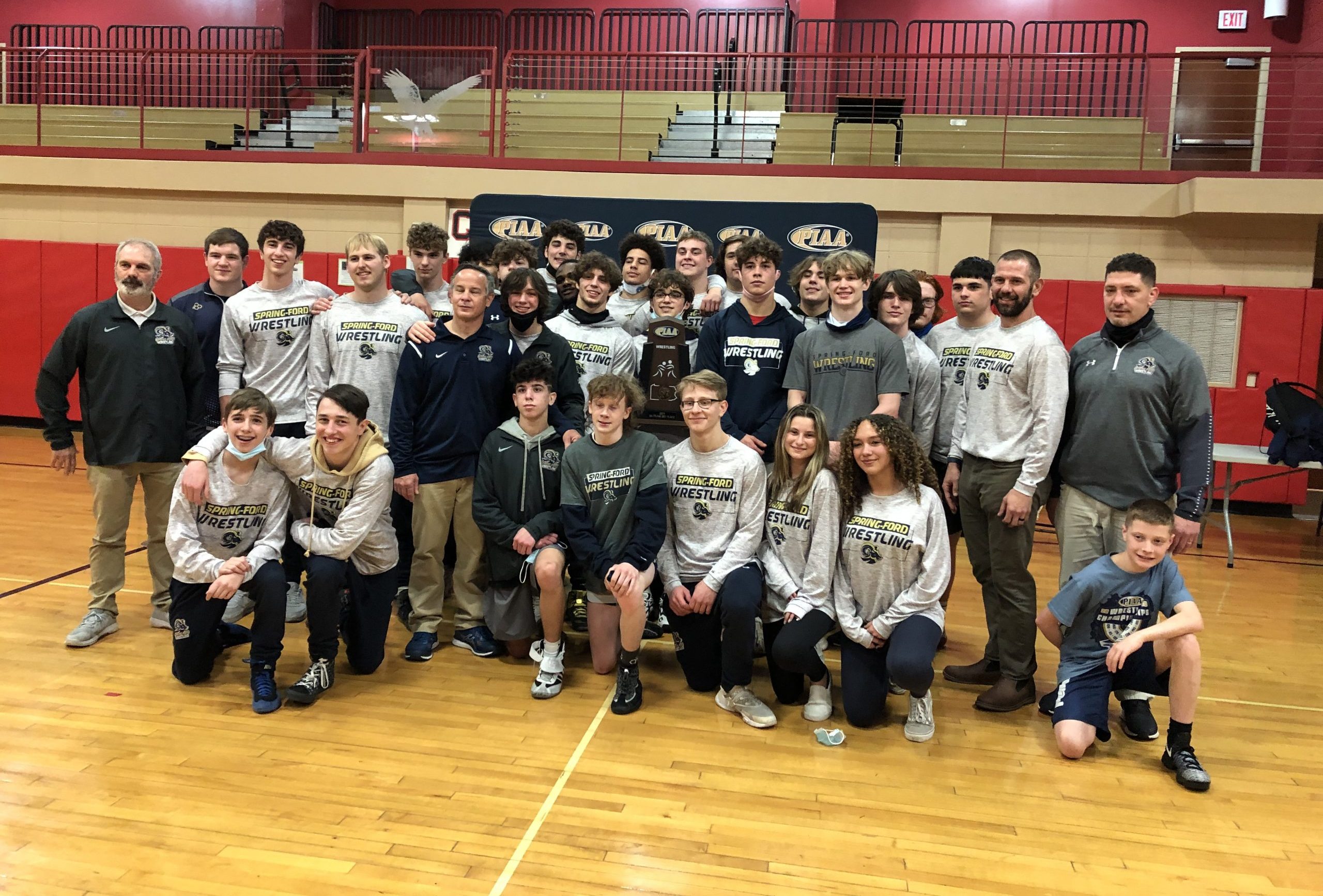 The Spring-Ford wrestling team poses together after a third place finish Saturday at the PIAA championships. (Jeff Stover - MediaNews Group)

MECHANICSBURG >> The 2021 season was undoubtably the best in Spring-Ford program history.

And the team’s senior class, arguably the best in program history, set a strong leadership example in the accomplishment of its many achievements.

The Rams closed out the campaign on a winning note Saturday, with a high finish in the PIAA Class AAA Team Duals. A 36-32 victory over Williamsport, its response to a season-first 32-28 semifinal-round loss to Central Dauphin, got Spring-Ford the third-place trophy and medals in its highest finish in the state duals. Their team achievements were owed in large part to the individual performances of members of the 12-man Class of 2021, who stayed strong through the pandemic-impacted winter season reached heights no other Spring-Ford team could claim.

“This is a special group of kids,” head coach Tim Seislove said about his seniors. “We got a lot out of the class and the kids. They were disappointed about the loss to Central Dauphin, but they came back to get the third-place medal.”

The efforts of super-seniors Joey Milano and Jack McGill, well-documented during the season, were prominent at Cumberland Valley High School. McGill, a silver medalist in the state’s individual tournament, scored two pins on the day; his 21-second drop of Williamsport’s Santine White boosted the Rams’ lead to 25-14 with five weights left to contest.

“Last year was probably our second-best,” McGill said as teammates and their parents were celebrating the state-duals finish. “We came into the season thinking ‘How can we improve?’”

McGill’s credits his senior season included a 25-2 season record and championships in the District 1-AAA North and South East AAA Regional tournaments. His 148 career wins puts McGill 19th among wrestlers from The Mercury coverage area and second in the Spring-Ford annals, headed only by 2018 graduate Brandon Meredith’s 150.

“This means a lot,” he said of the Rams’ big finish. “The other guys on the team watched us wrestle, and saw we didn’t give up bonus points.”

Milano, Pennsylvania’s 189-pound Class AAA champion working at 215, wrestled only against the Millionaires after being awarded a forfeit in the Central Dauphin match. But his supersonic technical fall of Charlie Lundy — he rolled up a 16-1 score in a mere 1:44 seconds — gave his team a match-clinching 36-20 lead.

“We have no regrets,” he said. “We left it all out there today.

“It’s been even longer,” Milano said of the ties between the seniors, in some instances dating back to the youth levels. “The relationship we’ve built has been even better.”

Milano (23-0) closes out his scholastic career with three District 1 section and two South East AAA Regional championships and a total three state medals. His 134 career victories ranks 35th in The Mercury coverage area and third in the school.

“It was pretty cool to be part of this … team and individual,” he said.

Another senior, Zach Needles, put a satisfactory cap on his high-school career. His gritty 4-2 decision of Williamsport’s Roman Morrone — he scored three points in the second period, then held Morrone off in the third — gave Spring-Ford some breathing room in the form of a 19-14 lead.

Needles (18-6) earned a second silver medal at districts and qualified for states with a fourth in the South East AAA Regional tourney. Making a run at the 100-win mark, he ended up short at 97.

“It was neat to see the kids go out like they did,” Seislove said. “Zach, Jack and Joey symbolized the team. They were our three leaders.”

Other notable Ram seniors were Xavier Cushman, Aaron Judge and Gus Carfagno. Judge (4-2) added to the lead against Williamsport with a 2;34 pin of Ryan Dunlap at 189, and Cushman (13-5) had an 11-1 major decision of Central Dauphin 172-pounder Ethan Pae to his credit on the day.

Carfagno, for his part, was key to Spring-Ford qualifying for the state’s Final Four. The middleweight (9-6) posted a key 6-5 decision in Wednesday’s quarterfinal with Delaware Valley, part of a three-bout run that brought the Rams from a 15-9 deficit to a 21-15 lead on the way to their 37-17 win.

From the underclass ranks, the locals got 2-0 days from Vinny and Dominic Ortlip and Quinn Smith. Dominic (19-5) had a 2:41 pin of Devin Harris in the Williamsport match’s 120-pound weight class, Vinny scored a 12-2 major decision on Luke Seagraves to start the third-place contest on an up note and Quinn (15-3) had a 9-5 decision at 132 against Central Dauphin.

Waynesburg went 16-0 in dual matches in and around team-championship finishes in the South West AAA Regional and PIAA Class AAA Tournament. It had six medalists in the individual competition, led by state championships by Mac Church (120), Wyatt Henson (145) and Luca Augustine (172).

The District 10 titlist posted a 31-22 victory over Southern Columbia (Dist. 4) to cap an 18-1 dual-match season. Ironically, SC advanced to the gold-medal match with a similar score in its semifinal against Boiling Springs (3-1).