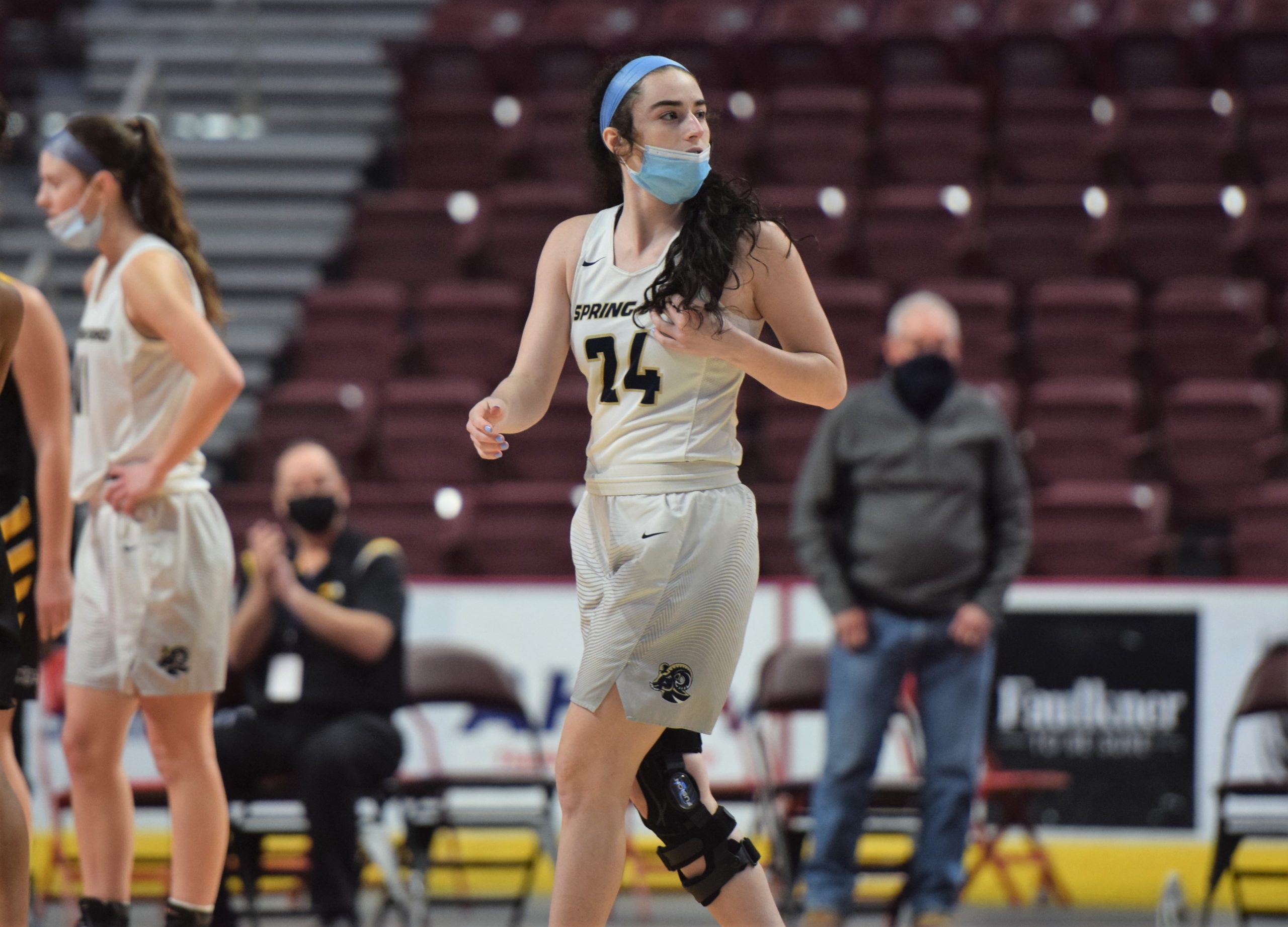 It’s impossible to miss the impact of the Class of 2021 players on the Spring-Ford girls basketball team.

That includes a senior that made her influence felt off the floor.

While starting seniors Abbey Boyer, Hailey Hudak, Lucy Olsen and Emily Tiffan have lifted the Rams to rarely reached heights this winter, another senior, Mac Maloney, had to make her mark from the sidelines.

Maloney was a part of the Rams’ rotation and known as a defensive stopper as a junior when Spring-Ford went 24-6 and reached the District 1 semifinals and PIAA second round. She played in all 30 games, averaging 3.2 points per game.

The day after the Rams exited the PIAA tournament against Cardinal O’Hara, Maloney shifted her focus to her primary sport, lacrosse.

A day before everyone’s lives changed radically due to the coronavirus shutdown, Maloney’s already had.

“I had an ACL and meniscus tear actually the day before quarantine last year,” Maloney said of the non-contact injury she suffered on March 11, 2020. “It was really, really frustrating. It’s definitely hard but I’m battling through it.”

She was working back for a January recovery timeline but reaggravated the injury that has kept her out essentially the entire season.

Maloney managed to play limited minutes in a Feb. 8 rout of Pottstown and on Feb. 12 had a brief stint during the PAC championship-clinching 65-27 win over Perkomen Valley.

“It felt so good to be back out there,” Maloney said. “But then I started having more problems at practice, it just kept popping out.”

Impact isn’t only measured in minutes though.

“Even though she’s been injured and only seen time in a game twice this year, she has had a major impact on this program throughout her career,” said head coach Mickey McDaniel. “She’s a great young lady, her teammates love her, and she’s a great stand-up comedian which really helps keep us loose. Her delivery is phenomenal.”

Despite her injury, Maloney’s commitment to the team was on display all season.

“She’s someone we love, someone we’ve missed on the floor all year, and someone who has been committed to being here every day,” McDaniel said. “Sometimes it’s easy for an injured player to not even bother coming out. Not her. We couldn’t ask for a better teammate for her attitude.”

Maloney loved the Rams’ run to the state championship.

“It’s super exciting,” she said. “I mean, it’s definitely hard sometimes not being out on the floor with them as much as I want to but I love watching them, cheering them on.”

Her teammates were happy to have her there.

“I think she definitely helps the bench get hype. She’s so into it, even though she can’t play,” said Lucy Olsen. “And she has a great personality. I think she brings the team together too.”

Maloney checked in for the final seconds of the Rams’ loss to North Allegheny Friday, getting the chance to finish her basketball career on the floor with her classmates.

She is holding out hope to compete during the lacrosse season ahead of moving on to East Stroudsburg in the fall where she’ll continue her lacrosse career.

McDaniel preached about attitude this season. Having a player promote that positive attitude when they had as much reason as anyone to go the other way was a tone-setter.

“I firmly say this, we would not be where we are without her being there because of who she is and what she brings to the table,” McDaniel said. There is no replicating the quality of the outgoing Spring-Ford seniors.

While a return to Hershey next year seems very improbable, the Rams are primed for long-term success.

They get the seal of approval from S-F all-time leading scorer Lucy Olsen.

“I’m really impressed. They say they’re nervous, but they don’t show that they’re nervous at all,” Olsen said after the semifinal win. “They just play so hard and are so skilled. It’s so fun to play with them.

“Just to play with them though, they’re even better playing with them than watching them.”

The sizable junior class that has waited in the wings will get its chance to shine in a new year. The junior class features Kylie Lee, De’ja Engle, Juliana Scogna, Morgan Pizzi and Kam Pufko, who saw action in the final and impressed in limited minutes in the state semifinal win over Nazareth.

It’s been a remarkable year across all sports at Spring-Ford.

The girls tennis team, which featured Olsen and Tiffan at No. 1 doubles, claimed their first PIAA Class 3A championship in the fall.

Also this weekend, the Spring-Ford wrestling team is competing in the PIAA Class 3A Duals tournament final four at Cumberland Valley. The back-to-back District 1 champions had newfound success on the individual stage two weeks ago: senior Joey Milano captured state gold at 189 pounds and fellow senior Jack McGill was a finalist at 160 pounds.

On the Pioneer Athletic Conference stage, the Rams’ football, boys’ cross country, girls soccer and girls’ tennis teams were league champions in the fall. The school added two more in the winter with girls’ basketball and wrestling.

That equals 6 of 14 contested league championships for Spring-Ford.