Unsung heroes propel Spring-Ford into semifinals of PIAA 3A Duals 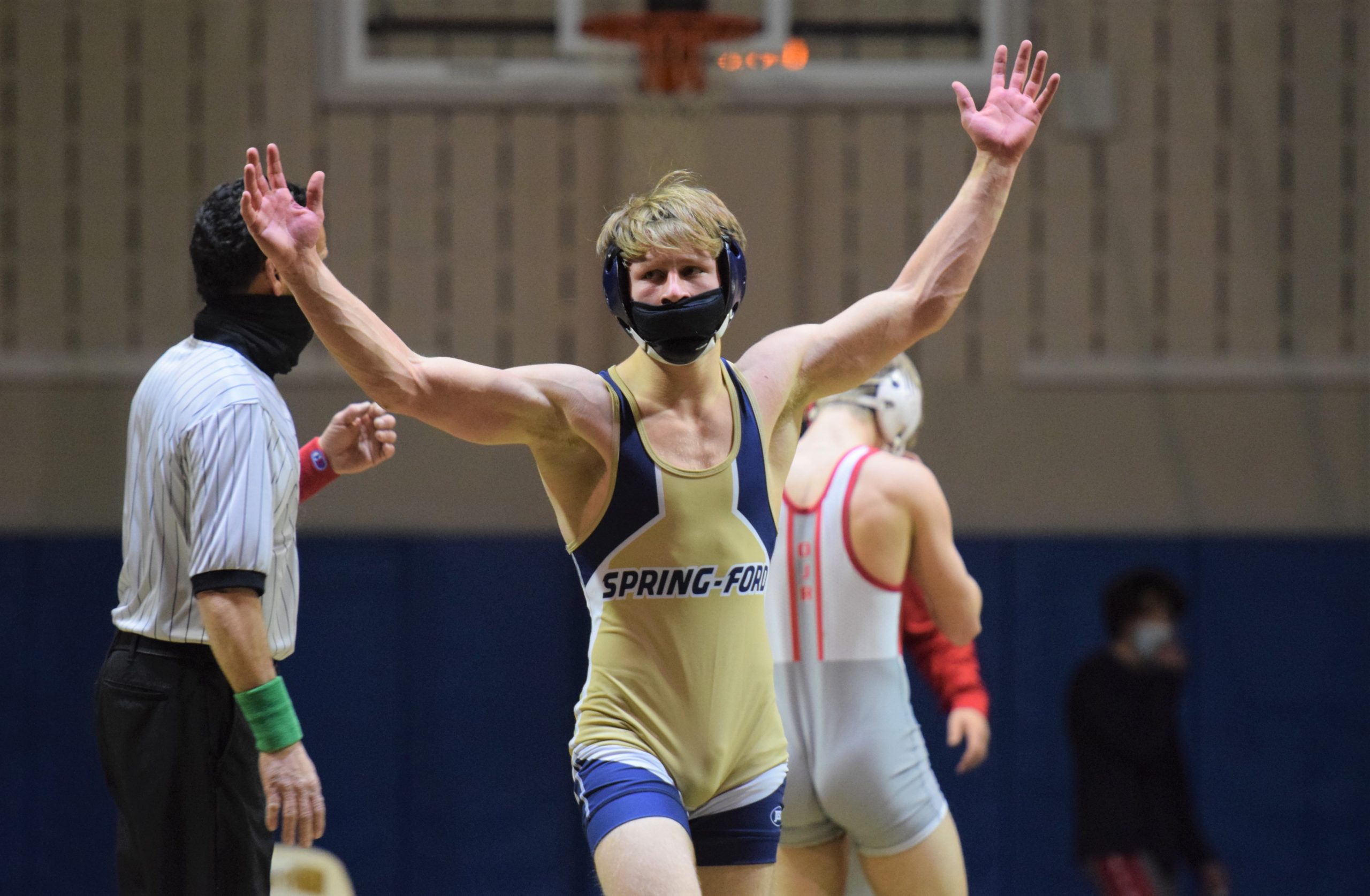 UPPER PROVIDENCE >> Pennsylvania’s switched-around wrestling season — the team duals tournament following the individual post-season, instead of the other way around — is as unusual as it is different this winter.

For Gus Carfagno and Ryan Lepore, it’s been a welcome change. It affords the Spring-Ford middleweights a chance to finish the 2021 season with state-level medals.
Carfagno and Lepore found themselves in the stands instead of on the mats, not selected for the pandemic-impacted individual tournaments while seven of their teammates were part of the District 1-AAA North Tournament field.

But as part of the Rams’ team-level juggernaut, they helped put their program into the PIAA Class 3A Duals final four competition Wednesday with a 37-17 win over Delaware Valley in the bracket’s quarterfinal round.

“It was unordinary at the start,” Lepore said of the 2021 campaign, “but it’s a good end to the season for the team, to get a state medal.”

“It was a huge loss not being able to wrestle any tournaments,” Carfagno added. “Now we show what we can do to win a state medal.” Trailing 15-9 after successive losing decisions at 113 and 120, the Rams got on track with Quinn Smith rolling up a 10-3 decision of Connor Crescimanno at 126. Carfagno (9-4) pulled Spring-Ford even with a gritty 6-5 decision of Ryder Machado, and Lepore staked the locals to a 21-15 lead — their biggest of the match thus far — with an overtime pin of C.J. Walton.

“Gus and Ryan were disappointed they couldn’t wrestle (individual states),” head coach Tim Seislove noted. “This is a great opportunity … a bonus they got.”

Lepore (9-4) forced the overtime issue by scoring three points in the third period for a 3-3 tie. In the one-minute first OT, he took Walton down and laid the Warrior sophomore out with a body press for a slap coming with 2/10 of a second left.

“I thought I had a takedown on the edge in the third period,” Lepore recalled. “In overtime, I just kept attacking.”

“Ryan kept his composure at the end,” Seislove added.

Carfagno staged his own come-from-behind scenario one weight earlier. Trailing Machado 2-0 after one period, he posted an escape and takedown in the second.

The margin of victory held up, as both wrestlers went 3-3 in the third.

“This has been a most memorable season,” he said. “Repeating as District 1 champions, being in the top four at state team duals … it’s crazy.”

The capper came from Xavier Cushman, who racked up a 4:13 drop on Sebastian Adler in the 172-pound finale. The only break in Spring-Ford’s ending roll came at 145, where Del-Val’s Dan Privatt rallied for an 11-8 decision.

The Rams’ early points came from Joey Milano, a Class AAA state champion at 189 — the first in school history — getting a 46-second drop of Aiden Black at 215, and Cole Smith blanking Landon Machado, 3-0, at 106.

Spring-Ford’s Class of 2021 is no stranger to the PIAA Team Duals, having qualified for each of the last four years. But the Rams got only as far as third-round consolations each time, making this year’s performance all the more notable.

“It’s been most memorable,” Seislove said. “The team’s done a lot of things it never accomplished before. It’s a tribute to this senior group.”

The Rams will face Central Dauphin (District 3 champion) in the one 4 p.m. semifinal, Waynesburg Central (7-1) and Williamsport (4-1) in the other. Championship and third-place matches will be staged at 6 p.m.

NOTES >> In the team’s post-match huddle, Seislove laid out the plan for team personnel who want to go to Cumberland Valley Saturday. It’s a safe bet there will be a large number of takers. “Everyone’s excited. They want to go,” he said. … Del-Val’s two state medalists, Jason Henderson and Zach Jacaruso, provided the Warriors a good portion of their early points. Henderson, seventh at 215, scored a match-fastest 29-second pin at 285, and Jacaruso (second at 113) had an 8-1 decision at 113. … In a unique circumstance at 152, Needles and Preston Machado both got stopped for blood cleanup at the same time. … The PIAA Class AA Team Duals will also hold their semis and finals at Cumberland Valley, at 11 a.m. and 1 p.m. Qualifiers will be Boiling Springs (3-1), Southern Columbia (4-1), Burrell (7-1) and Reynolds (10-1).